An Introduction to Critical Wellness

The link between political activism and self-care.

This is an article published in the series to belonging*, as the first step of our work towards purpose and belonging. This series is made possible by the Open Society Foundations. "to belonging" is a long-term project that aims to change the discourse around diversity and inclusion to one of belonging. Anti-racism, feminism and justice will become the focus and should lead to a radical systemic change in the impact sector, from "power over" and "power for" to "power with".

… Personal power really begins with care of the self.”
bell hooks

The constant confrontation with racism requires enormous psychological and physical energy from Blacks, indigenous peoples and People of Color. Amma Yeboah, a psychotherapist, notes that this is energy and time that is taken away from family, school, studies, sports, work, friendship, social engagement, and creativity, (2017). bell hooks wrote that white supremacy, racism, sexism and the capitalist economic system collectively condemn us BiPoC to a subordinate position (1994: 4). The wounds suffered in this process are not only materially and economically visible, but also hurt our heart, head, body and mind (ibid.). May Ayim also described racism as a "stress factor" (1997), which frustrates and negates the existence of black communities in Europe. Racism has the intention to subordinate people, to exploit world regions and labour forces. Racism never has the intention that we should be well. Racism has the conscious and unconscious intention and direct or indirect way to kill the effect (Yeboah 2017). Ngibia Kessé (2018: 232) writes that racism aims at the destruction of self-worth.

The constant confrontation with white normativity is also stored in the soul as a painful experience and trauma (Ngibia Kessé 2018: 233). bell hooks writes that wellness (well-being) is a privilege of white people, because historically wellness was not available to black people (1994: 17). Audre Lorde wrote, “We were never meant to survive” in the poem, l”. This is precisely why we should choose Wellness. This is why wellness is political, because it is a privilege that has never been granted to us. But I didn't always have this insight, it only came to me in the past three years.

In 2017, I was at a conference in Berlin as part of my full-time work on the topic of prevention of racism in the school context. A conference with wonderful speakers like Mohamed Amjahid. He read from his book "Among Whites: What it means to be privileged" and seemed to be very well received by the audience which made me believe that the audience was interested in the reflection of whiteness and the privileges associated with it. However the following day, when the opportunity arose to hold a workshop on Critical Whiteness at a Bar Camp, I was very surprised that almost nobody was interested. Rather, the discussion began about why it was necessary at all. Some white participants said something like "I don't need Critical Whiteness, I need Critical WELLNESS after such a busy day". I was disappointed, because I had a different opinion of the "anti-racist" white participants, but actually I know better. It is very difficult and exhausting to "get a grip on your own nose" and to critically reflect on your own privileges. But the pair of terms Critical Wellness echoed in my head. I started to think that Critical Wellness could be an important process for people with experiences of racism and other discrimination just as Critical Whiteness is an important process for white people.

Somewhere I had read the quote from bell hooks, "For black women 'choosing wellness' is an act of political resistance" and I started to research what might be behind the quote. At the same time, I was often on the road as a staff member for anti-discrimination work at conferences and seminars and was trying to privately educate myself  as much as possible in the fields of racism prevention and democracy education. It struck me that most of the German-language literature and the majority of seminars in this area were aimed at white people. Occasionally there were also empowerment workshops and the odd empowerment book.Don't get me wrong, popular books like 'exit RACISM' (Ogette 2017), and 'What white people don't want to hear about racism but should know' (Hasters 2019) are very important, but they are primarily aimed at white people. While addressing racism is important for BIPoC and its self-healing process, it is not the key to self-recovery and wellness.

What was the key? After reading "Sisters of the Yam - Black Women and Self-recovery" by bell hooks (1994) a second time, I finally understood what she meant when she wrote that choosing wellness is an act of political resistance.

I understood that wellness is empowering and a radical form of political resistance.  It is about working on yourself, healing yourself from the wounds of racism and discrimination and being honest with yourself. Only those who work on themselves are internally equipped for political resistance and social change.

When I shared this sentence in one of my workshops, one participant replied that it was "very individualistic and she is not going along with it". But another participant correctly added, "UBUNTU: I am because we are". When I deal with my internalized forms of oppression, I feel better and so does society. When society actively deals with discrimination, I feel better as well. But the change should start with every single person. Wellness in this context is a process that is both painful and necessary. It is, essentially, critical. 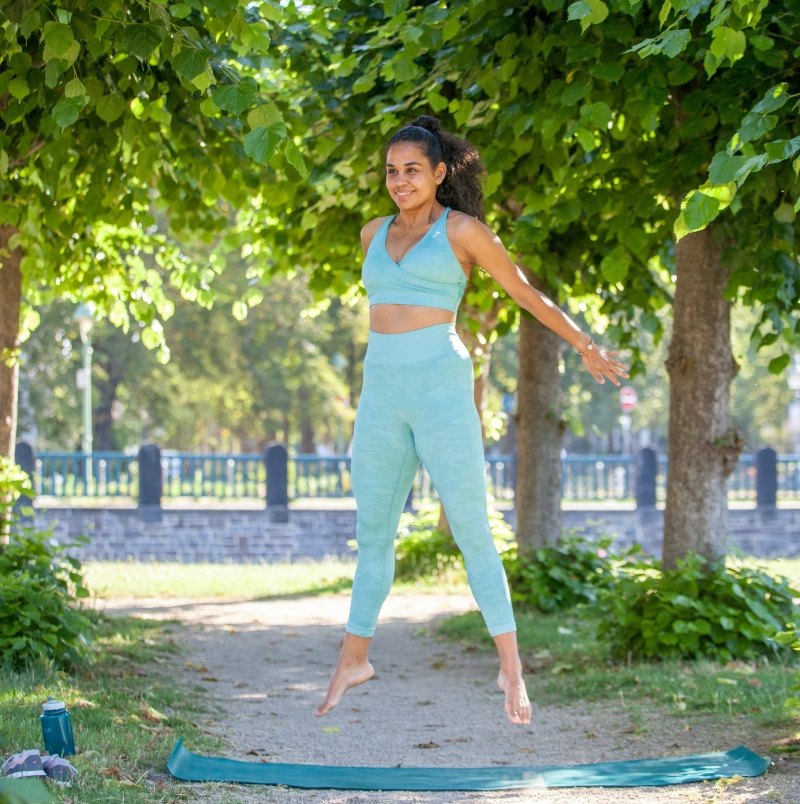 Mariela herself during training © Mariela Georg

Mariela Georg studied Psychology B.Sc. and Human Resources M.A. She has been living in Germany (again) since 2007 and has been working as a volunteer since 2010 and full-time in anti-discrimination work since 2014. She is also a trained mediator, stress coach and fitness trainer and founded www.empower-mental.de in late 2019. With her workshops Mariela wants to support BiPoC in taking a critical attitude towards power and discrimination on the one hand and on the other hand to be able to take care of one's own physical and mental health, #criticalwellness. Her dream is to organize nationwide Critical Wellness conferences and retreats. However, she finds it more important that health care is tailored, institutionalized and structurally anchored to the needs of BIPoC.