The Activists Fighting Against Human Trafficking

Eirliani Abdul Rahman is a diplomat turned activist. To raise awareness for survivors of sexual child abuse, she is setting out for an expedition to Antarctica in December 2018.

This is a photo essay, a departure from the prose of all the previous blog posts. They say a picture says a thousand words, and I feel that I can do the subject matter of human trafficking more justice with these photographs.

Trigger warning: Some photos may be upsetting to the reader. 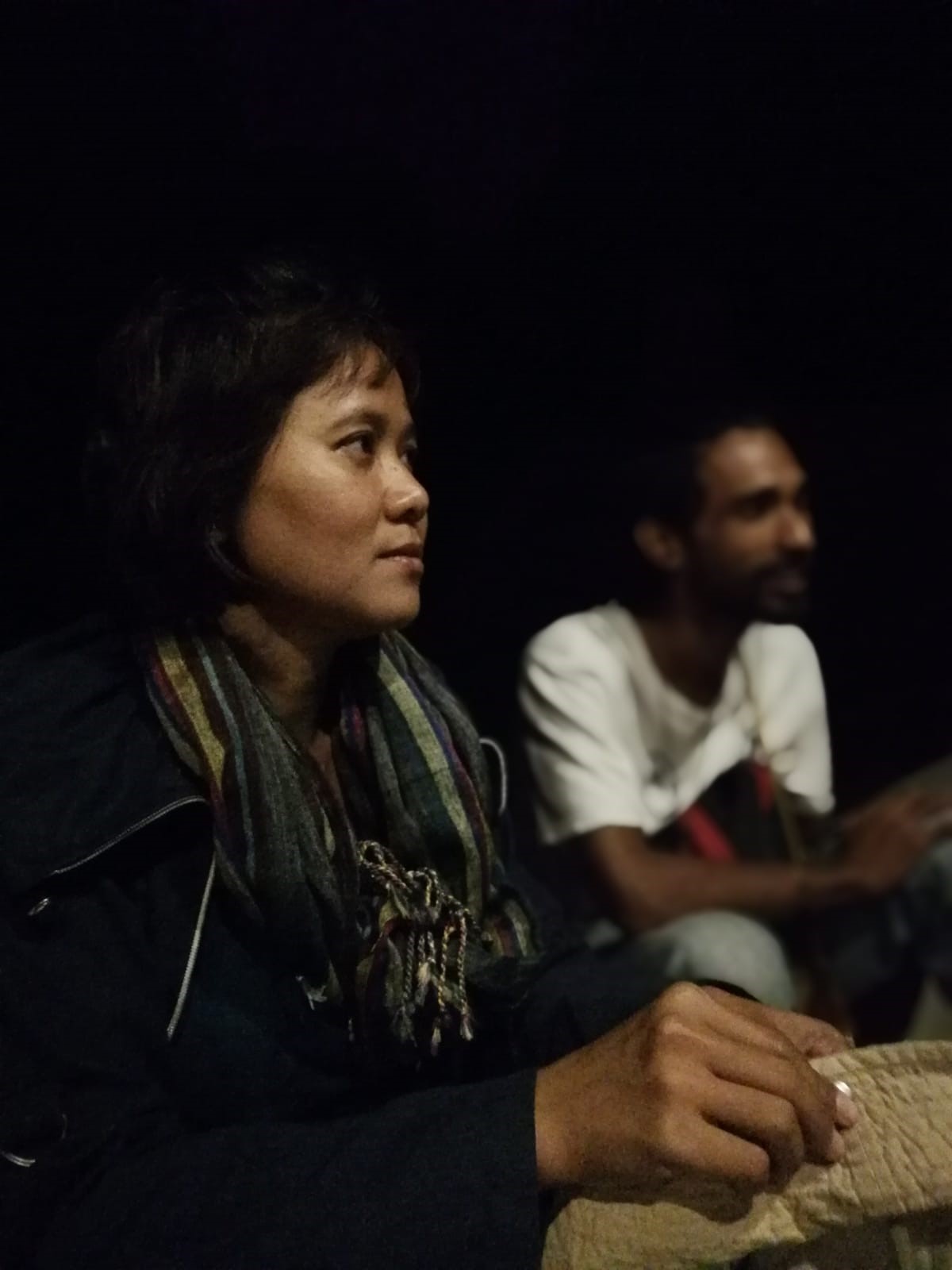 I met Okky Ardya (above left) at the Global Leadership Academy under the aegis of the German technical cooperation agency GIZ in Nairobi, Kenya in June 2018. Based in Jakarta, Indonesia, Okky is an editor and documentary photographer and is a contributor to the PannaFoto Institute, a not-for-profit organisation with the mission to develop photojournalism and documentary photography with the support of the World Press Photo Foundation.

Since 2012, she has done stories on undocumented Indonesian migrant workers in Malaysia, examining the issues vis-à-vis undocumented immigrants and trafficking victims and survivors. Her latest piece is on the human trafficking problem in the province of East Nusa Tenggara, the only Christian majority one out of the 34 provinces of Indonesia. 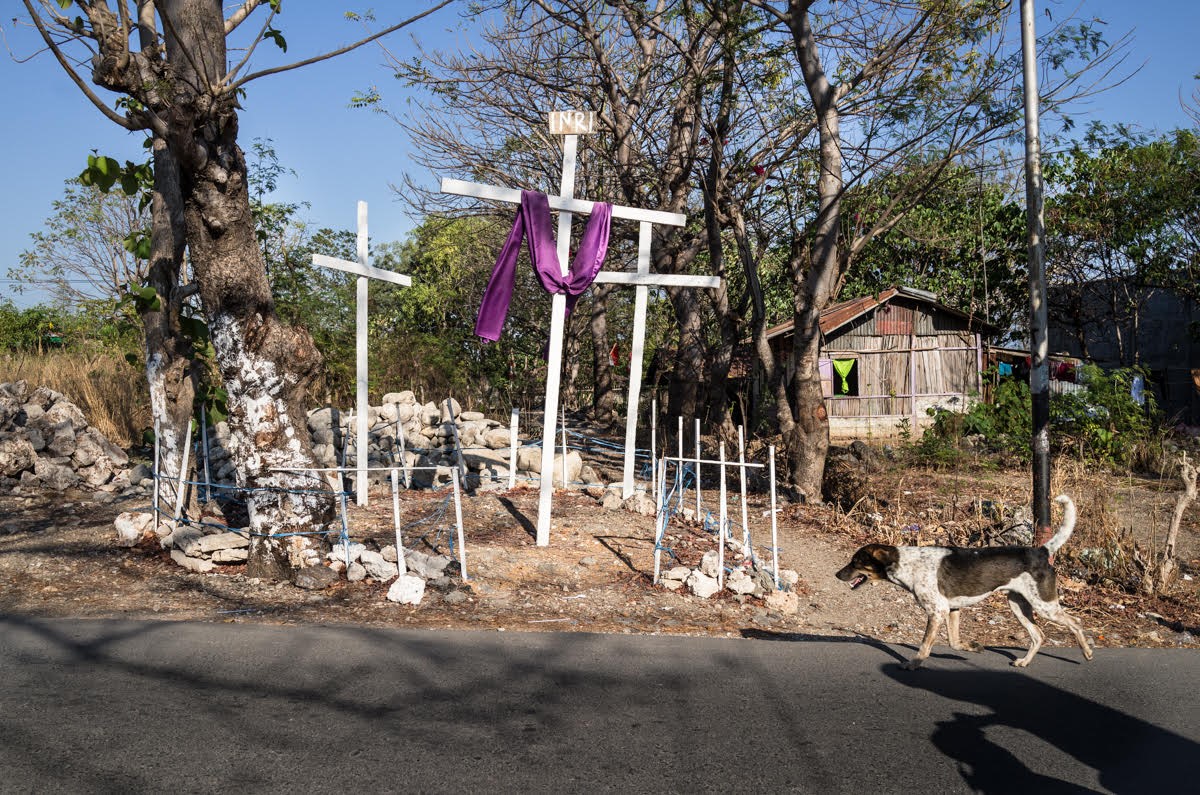 Crosses as decoration at the roadside in Kupang, East Nusa Tenggara. They are a ubiquitous sight in this city.

Due to the nature of the crime, it is often difficult to have an accurate estimate of the extent of the human trafficking problem. According to the 2018 Trafficking in Persons Report issued by the US State Department, the national police anti-trafficking unit in Indonesia did not have a mechanism to track trafficking investigations at the national, provincial, and district level, making it hard to determine the total number of investigations and resolved cases.

According to the IOM Indonesia, it assisted 4873 victims of human trafficking between 2000 to 2012. The police reported 123 new trafficking investigations in 2017, up from 110 the previous year. In 2017, the national police also reported referring 51 investigations to the attorney general’s office.

The Supreme Court implemented a comprehensive prosecutorial recordkeeping mechanism, but statistical discrepancies continued due to the lack of coordination with law enforcement entities, whose own self-monitoring practices remained underdeveloped. In 2017, the Supreme Court reported 407 new trafficking prosecutions, an increase compared to 263 reported in 2016, as a result of improved data collation. The Supreme Court also reported 324 convictions, compared to 190 in the previous year. Sentences ranged from two and a half years up to seven years. 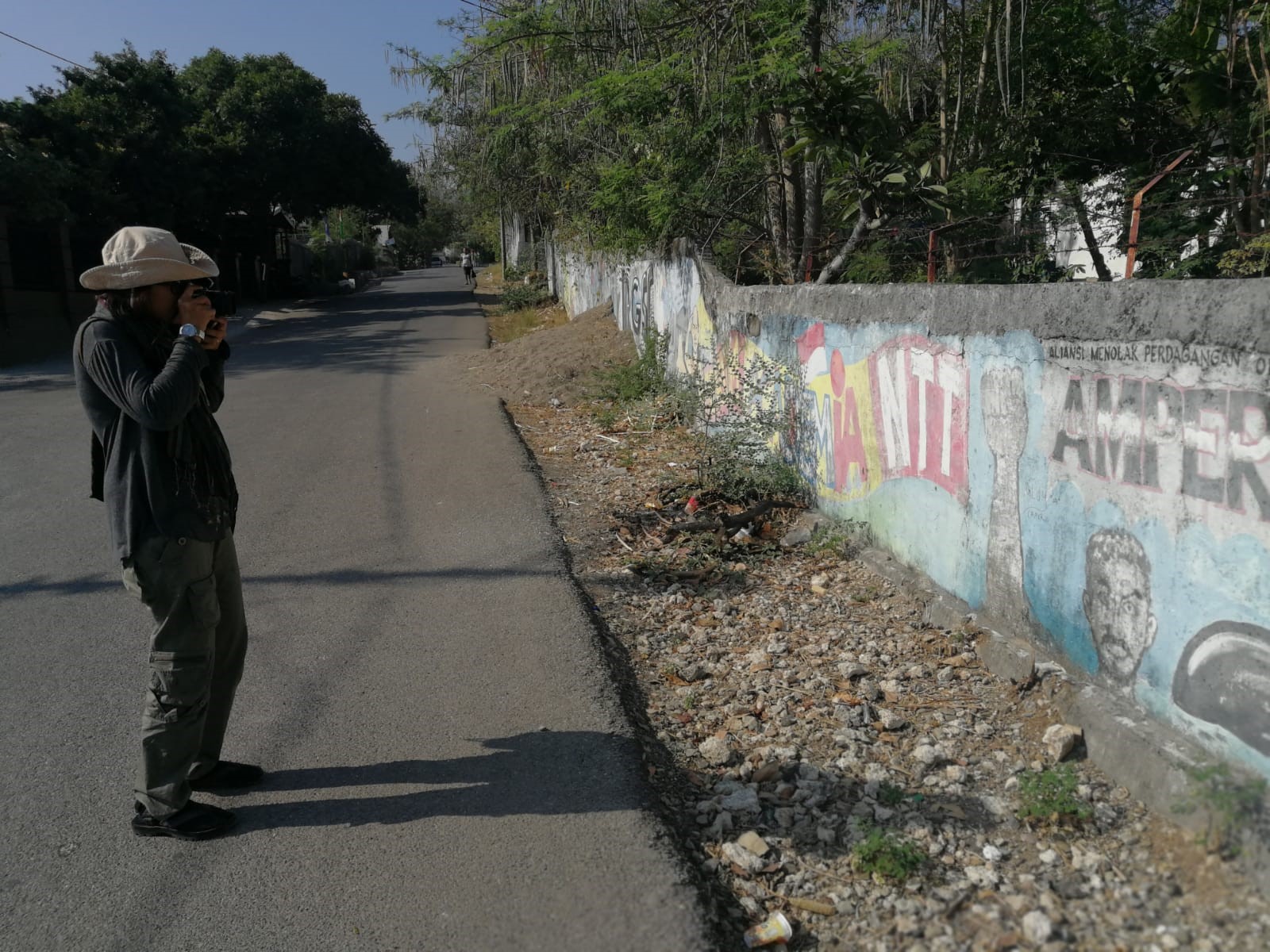 Okky taking a picture of the graffiti on the wall enclosing the compound of the Institute of Resources Governance and Social Change (IRGSC), an NGO fighting human trafficking based in the capital of East Nusa Tenggara, in Kupang. 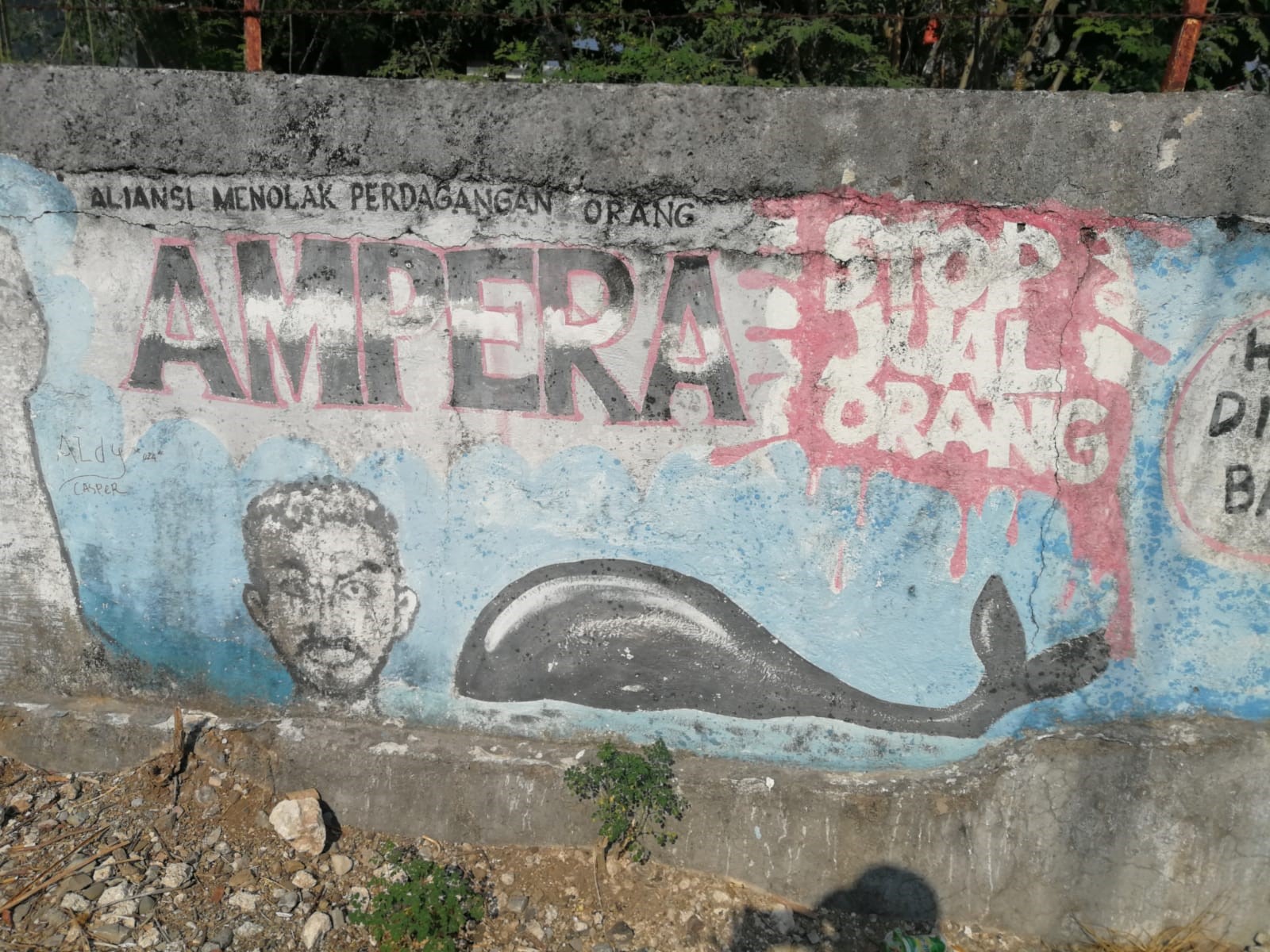 A 2011 IOM report noted that 31 percent of internal trafficking victims in Indonesia were recruited and trafficked by their friends. Recruitment can be a lucrative business: frontline workers in anti-trafficking organisations in Indonesia highlight that recruiters could be paid up to US$500 per recruitment by brokers working for agencies. These also include government officials. According to the 2018 Trafficking in Persons Report issued by the US Department of State, the Indonesian government convicted an immigration official under the 2007 anti-trafficking law and sentenced him to six years in prison in June 2017.

Parents are also involved in recruitment. A 2004 International Labour Organization report on child trafficking in Central Java noted cases of parents sending their children to work in the sex industry in order to pay off the parents’ debts. In 2007, the government of Indonesia passed the Eradication of the Criminal Act of Human Trafficking Law, which introduced a maximum punishment of 15 years’ imprisonment for traffickers. The law also provides a right to healthcare, psychological support and counselling, temporary shelter and legal aid to trafficked victims. In 2009, the government ratified the UN protocol on trafficking. 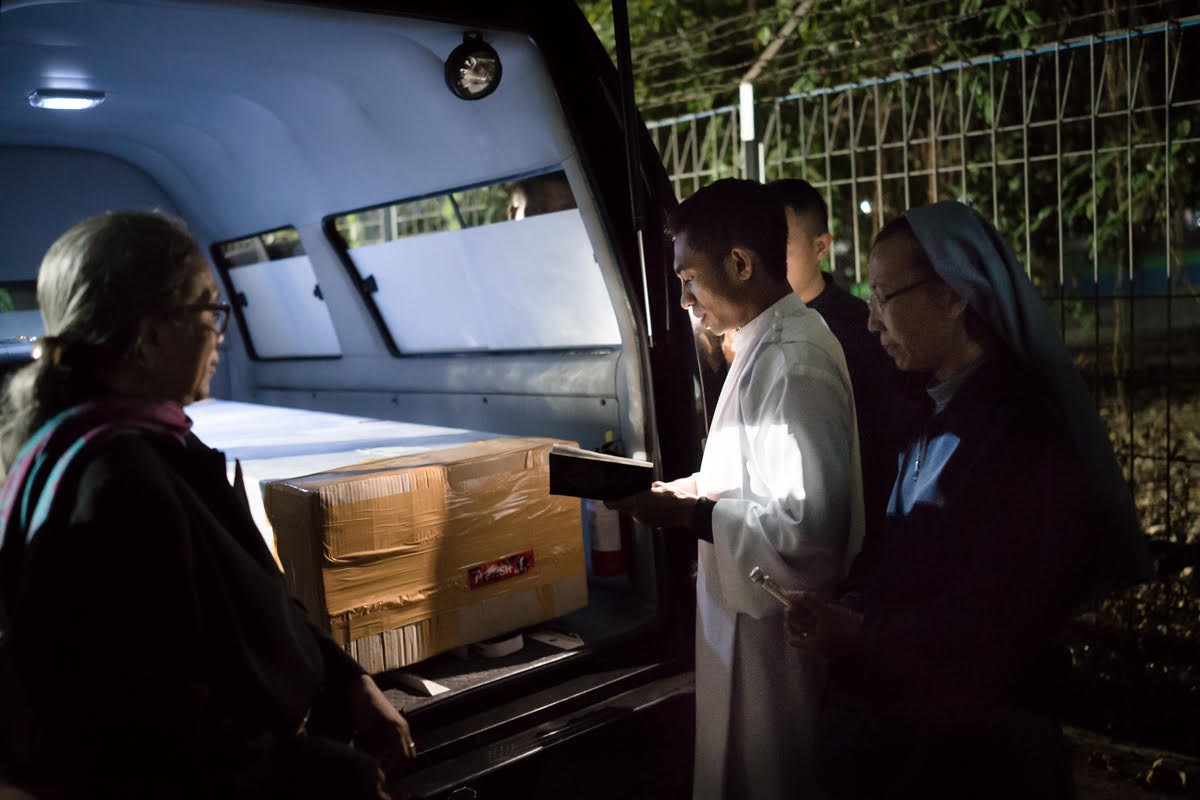 A priest administering last rites to a trafficked victim at the airport in Kupang, East Nusa Tenggara.

The word victim in Bahasa Indonesia “korban” literally means “sacrifice” in Bahasa Malaysia or Malay, my mother tongue. It seemed apt somehow, pursuing their dreams of a better life and believing promises of a good job abroad, some victims do not make it back. Approximately 32 million Indonesians live below the poverty line. In Nusa Tenggara East, 20% of its 4.9 million population, comprising mainly Catholics, live below the poverty line.

Okky explained that these last rites to the trafficked dead were only done in the province of East Nusa Tenggara, and nowhere else in Indonesia.

According to the International Migration Organization (IOM) Indonesia, 7200 people have been trafficked from the province, 82% of whom were women, making it the largest source province in the country. According to the Perempuan Indonesia Timur (East Indonesia Women's Network), there were 83 deaths from trafficking from January to September 2018 alone, all originating from East Nusa Tenggara.

Okky received a call one afternoon, telling her to be ready later that night as a cargo plane was arriving from Malaysia with the body of a woman on board. Not knowing which denomination the trafficked woman belonged to, priests and nuns from various Christian denominations clustered around to administer the last rites.

The 2018 Trafficking in Persons Report issued by the US State Department lists Indonesia in Tier 2, which means it does not fully meet the minimum standards of the Trafficking Victims Protection Act (TVPA) but is making significant efforts to comply.

Women are not the only ones being trafficked. Men are also trafficked as illegal laborers to be engaged in factory work, construction, agriculture, and commercial fishing. The night that I left Kupang, the capital of East Nusa Tenggara, Okky was notified of the arrival of a trafficked man’s body. 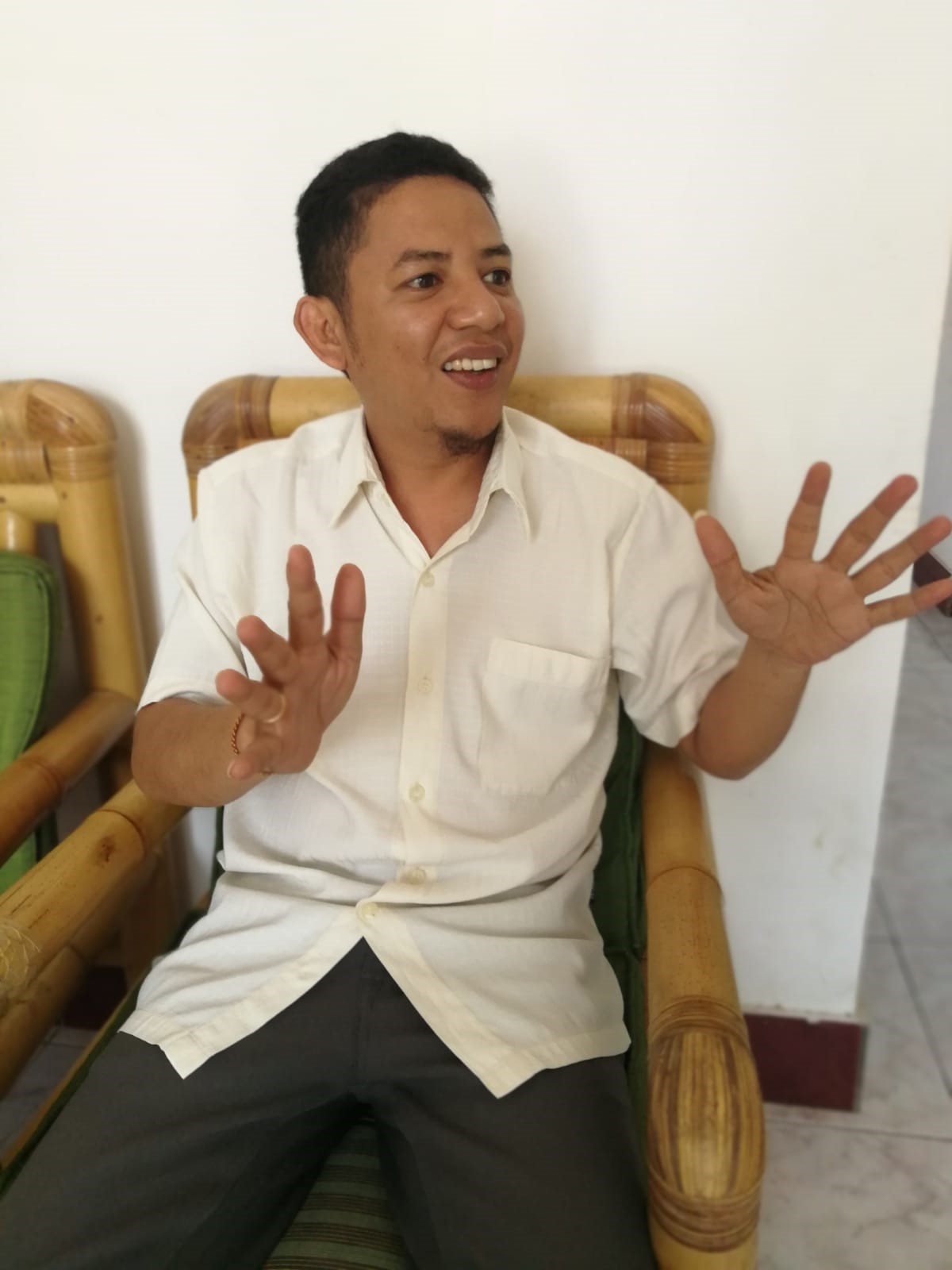 Deky Faah is a social worker from Rumah Harapan (House of Hope), a not-for-profit that shelters trafficked survivors. 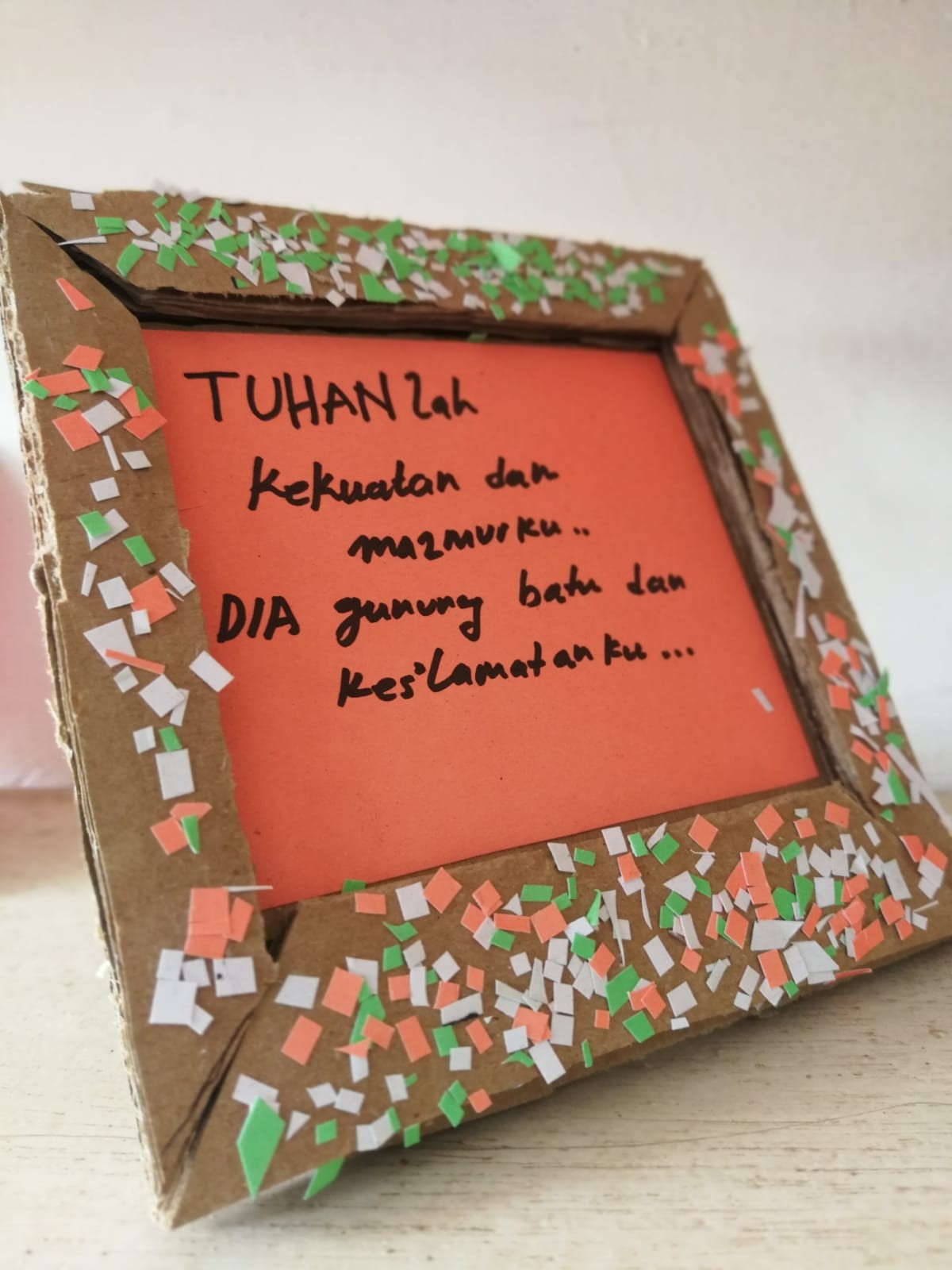 A piece made by one of the survivors at Rumah Harapan for sale. It reads: “God is my strength and Psalm… He is my rock and my refuge...” (Tuhan lah kekuatan dan mazmurku ... Dia gunung batu dan keselamatanku …)” 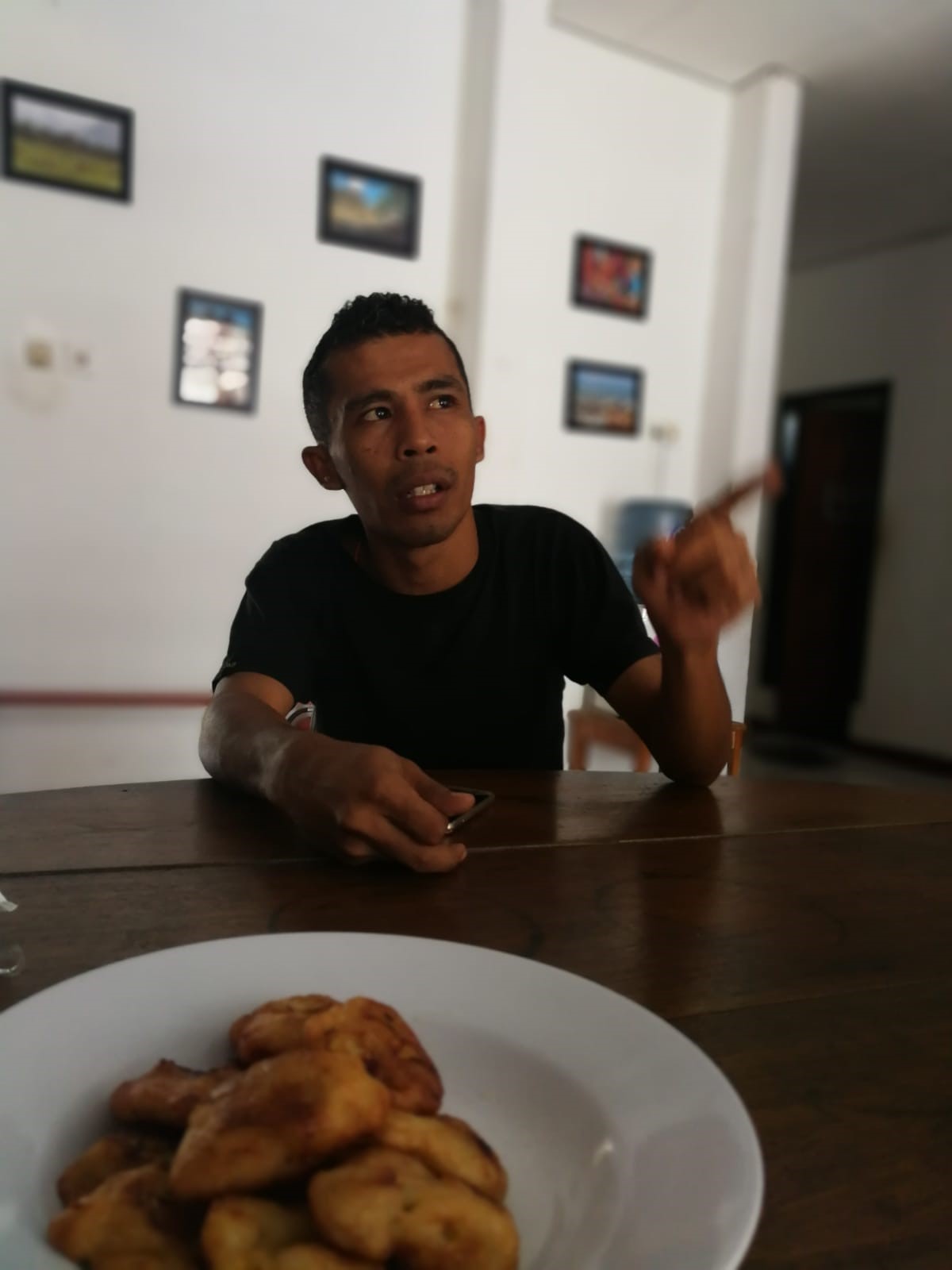 Ardy Milik, who is from Soe, Timor Tengah Selatan in East Nusa Tenggara, talks about his experiences working on human trafficking cases in the province. 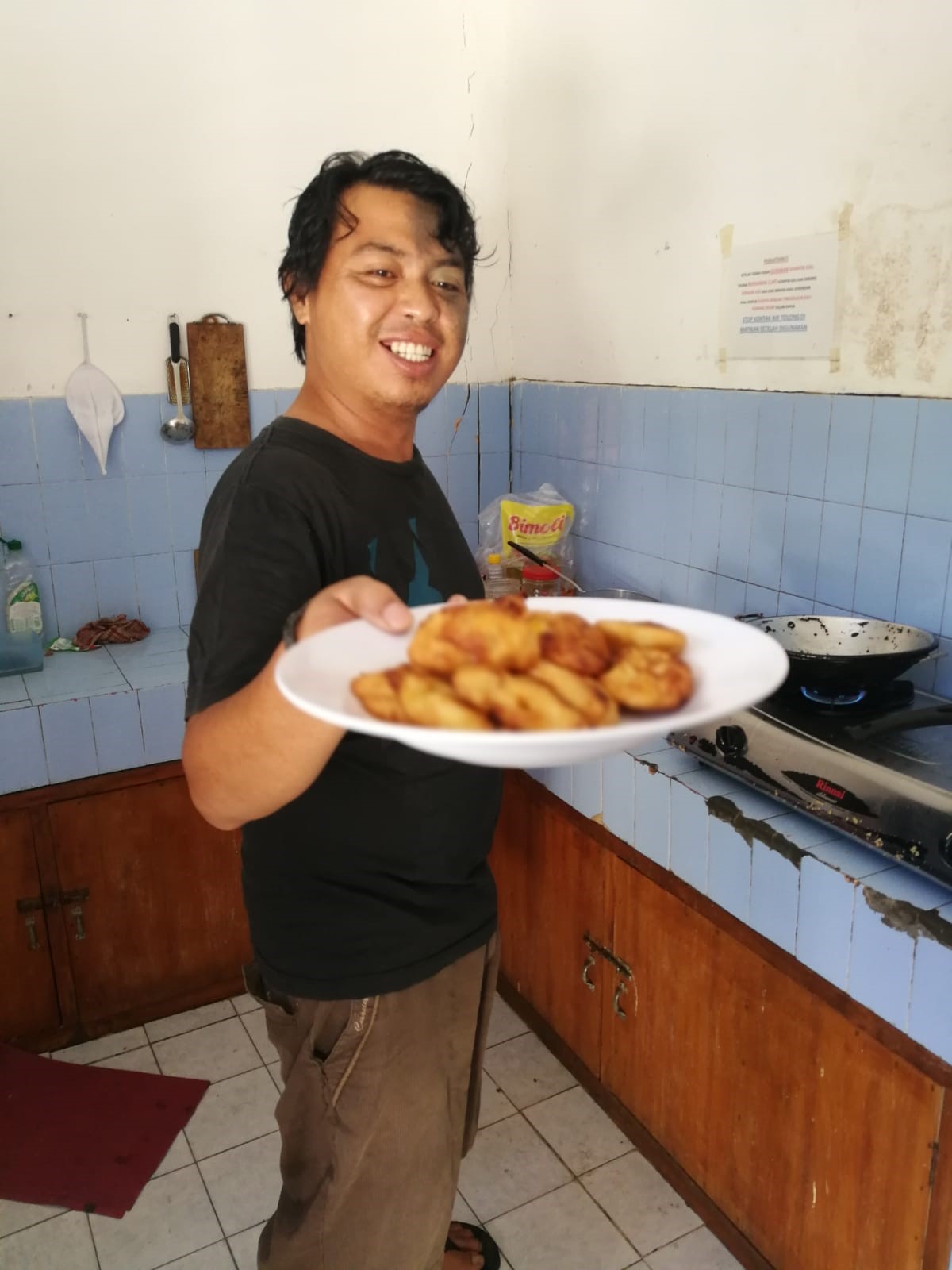 It is not all work and no play. Taking a break before the commencement of meetings early one morning with fried banana fritters made by one of the staff members, Arthurio Oktavianus.

Okky and I met two social workers (pendamping or literally translated into Malay, “guides”) from Rumah Harapan (House of Hope), a not-for-profit which shelters trafficked survivors. It is supported by the Christian Evangelical Church in Kupang, East Nusa Tenggara. Mr. Deky Faah, pictured above, is one of two staff members. The not-for-profit has three other administrators and six volunteers. Their work comprises three pillars: the prevention of human trafficking, rehabilitation, and research. The survivors could be referred to the shelter or they come at their own volition. Their rehabilitation programme includes counselling, referrals and home visits. They also provide legal aid assistance including vis-à-vis witness protection, compensation, and court trials.

Mr. Faah requested that we keep the location of the shelter confidential for the security of the survivors. They, meaning the staff, receive threats from the traffickers. He added that they would lock the gates and let things be (“biarkan saja”).

Mr. Faah noted that each network of traffickers would send 5-6 victims from East Nusa Tenggara to the capital, Jakarta, every day. The victims were recruited on Facebook. The trafficker would change his clothes at the airport, ensure that the victims board the plane to onward destinations, and make his escape via the cargo area. 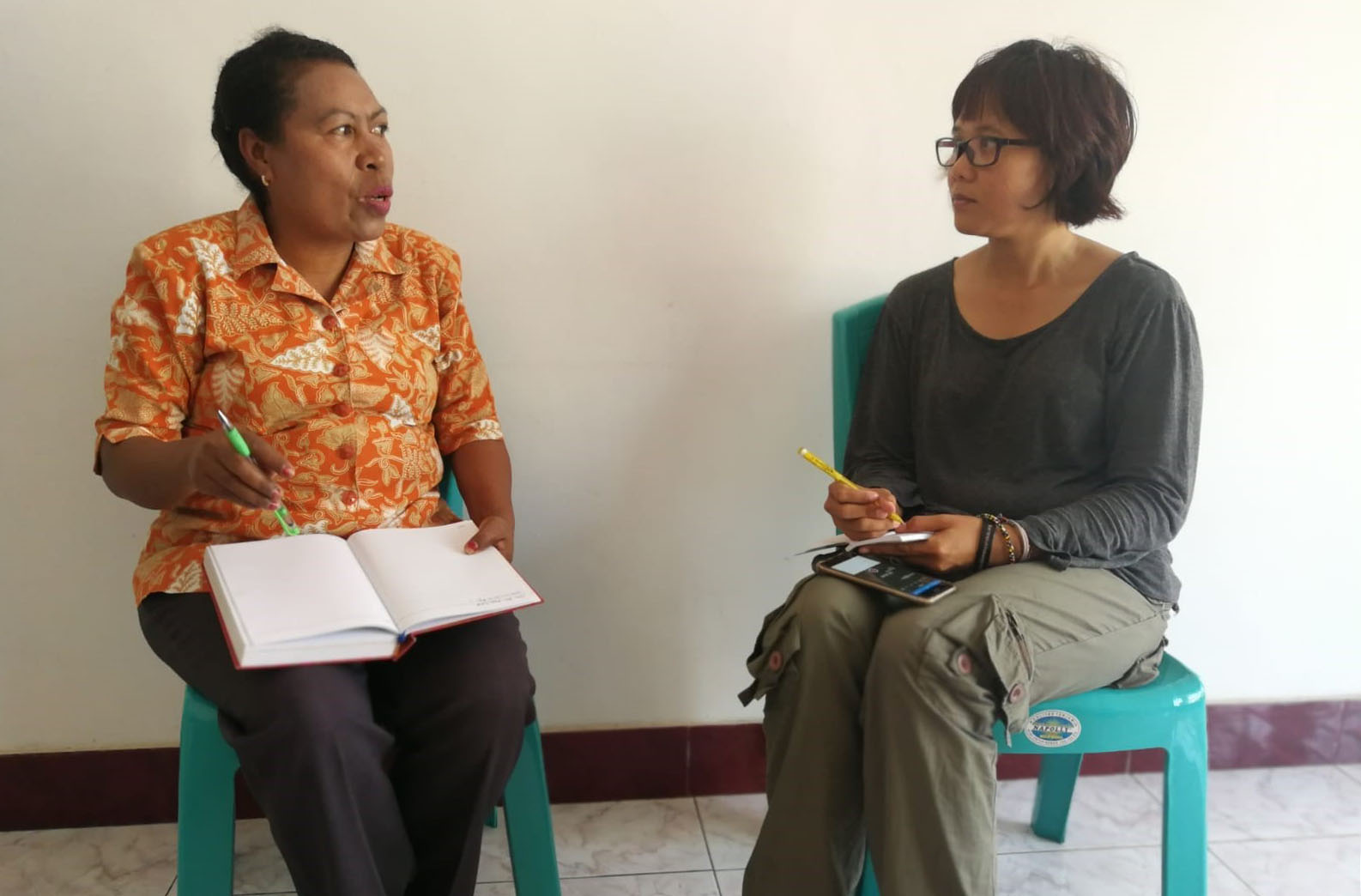 Okky interviewing Ms. Esther Mantaon, a social worker at Rumah Harapan. She said regarding trafficked victims: “Perginya tidak diketahui, pulangnya harus difasilitasi.” (Their departure abroad was not known; their return has to be facilitated. NB: in body bags.)

According to the NEXUS Institute, most support currently available to trafficking victims are once-off, designed to meet only urgent or immediate needs, with limited or no follow-up help. This impacts the successful and meaningful integration or reintegration of trafficking victims and survivors. The institute also highlighted that case management is generally weak to non-existent in Indonesia. The lack of professional social workers at the community level is a contributing factor.

Mr. Faah explained that they had no formal training, everything was learnt on the job, and that they consulted often with psychologists in their work rehabilitating survivors. As part of a federal government programme, social workers like Mr. Faah are paid US$45 per month (500,000 Indonesian rupiahs) as their salary, excluding a small transport allowance.

"Another challenge is that victims and survivors themselves often do not understand the nature and extent of their exploitation." 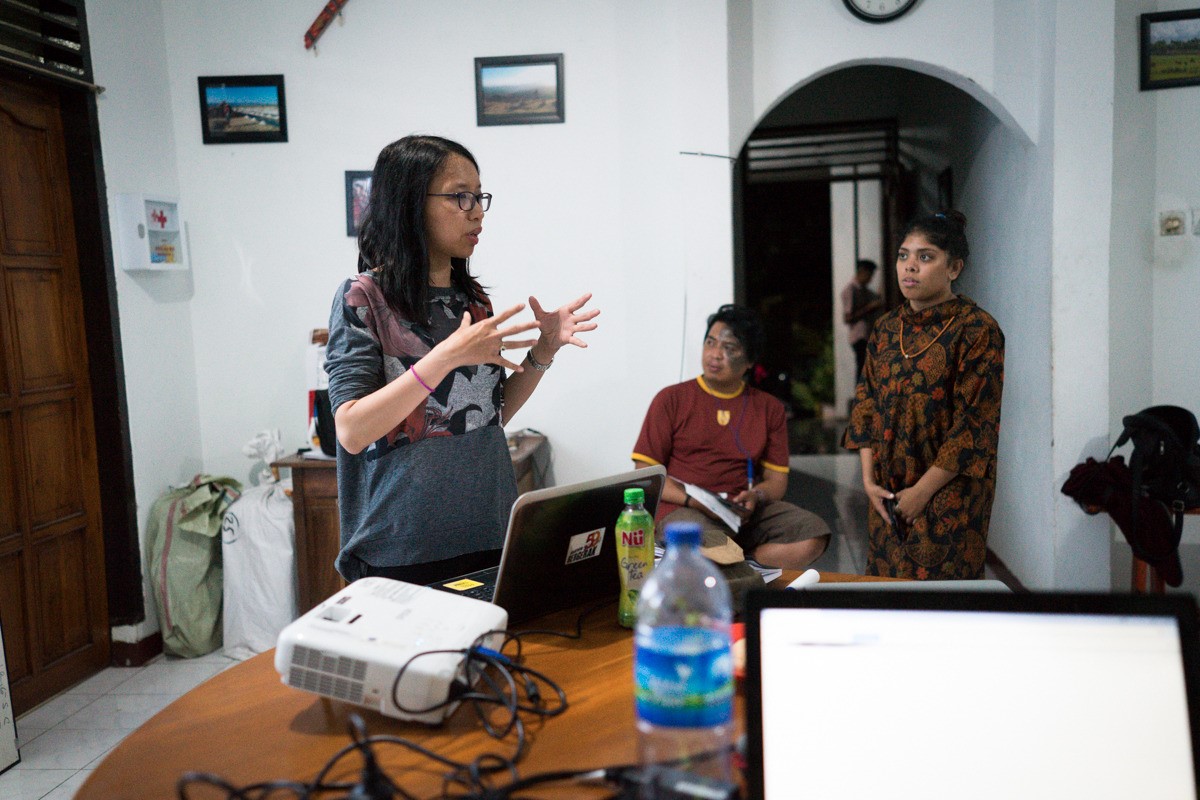 Participants at a workshop which Okky conducted on the essentials of capturing good photographs to make a story.

According to the anti-human trafficking activists I spoke to, including Okky, there is a high level of awareness on the issue of human trafficking in the province and the churches are heavily involved to combat this problem. However, the approach to potential victims now takes a different guise: in the form of “visions” where a churchgoer would tell a victim that he or she had seen her in a “vision” that she was meant to work abroad. Faced with this and offers of help while abroad, the victim does not recognise that he or she is being trafficked until it is too late.

Another challenge is that victims and survivors themselves often do not understand the nature and extent of their exploitation. Hence, they may go unassisted after their return to Indonesia, and struggle to recover from trafficking and reintegrate into their families and communities.

According to the NEXUS Institute, victims often go unidentified because the police and service providers do not recognise that men could be trafficked or that victims could be trafficked for labour, thinking that human trafficking comprises mainly sex trafficking. Instead, they are viewed as failed or irregular migrant workers.

The first step toward healing is to break the silence and reduce the stigma. We must all educate ourselves on how to help survivors move forward with courage and confidence. 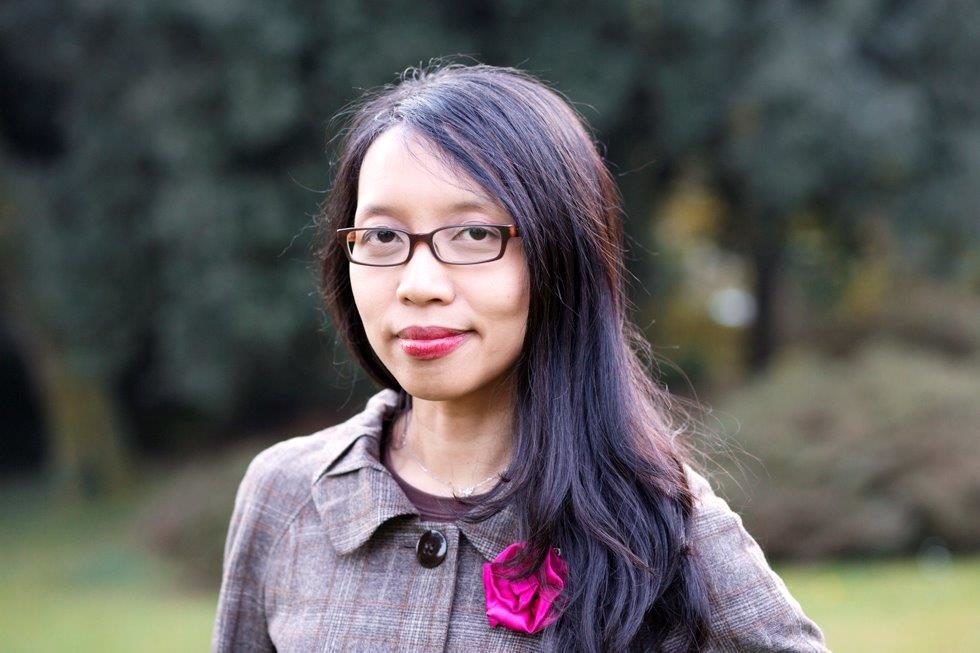 Eirliani Abdul Rahman is co-author of the book “Survivors: Breaking the Silence on Child Sexual Abuse.” She is based in Colorado, USA. She is also a social media ninja, and loves climbing volcanoes and rock climbing in her spare time. You can follow her adventures on Facebook, Twitter and Instagram @eirliani.

Eirliani Abdul Rahman is currently preparing for a 700-mile ski trip to the South Pole in December 2018 to raise awareness for child sexual abuse survivors. She is the co-founder of YAKIN (Youth, Adult Survivors & Kin In Need), an NGO working on children’s rights and child protection, and a member of Twitter’s Safety & Trust Council. She serves as director at the Kailash Satyarthi Children’s Foundation and is a member of the Global Diplomacy Lab.

In 2015, she led a successful campaign of the NGO Bachpan Bachao Andolan (“Save the Childhood Movement”) founded by Nobel Peace Prize laureate Kailash Satyarthi called #FullStop to #childsexualabuse in India, which reached 16 million people over 6 weeks. She won the BMW Foundation Responsible Leaders Award in 2015.

Work Smarter
On New Normalities - The Old Ones Are Br...

Lifestyle and Wellbeing
A Carbon Neutral Life? There's a Subscri...
TBD* uses cookies to ensure you get the best experience on our website. Read more here.GOT IT
From Diversity and Inclusion to Belonging