Why Trump and Clinton Supporters Perceive Immigrants so Differently

The chasm between American mindsets is growing. Here are our findings from a survey with 12,300 people.

On Friday, January 27th, Trump made an executive order to barr all people from Iraq, Syria, Iran, Libya, Somalia, Sudan, and Yemen (all majority Muslim countries) from entering the U.S. for 90 days.

The order, which also stops the admission of all refugees for four months and places immigrant vetting under revision, sparked shock and outrage in many Americans and led to nationwide protests. However, right-wing news and media outlets like Breitbart news offer a very different interpretation of Trump’s executive order. They argue that many Americans see Trump’s order as an appropriate protective measure and claim that calling it a “Muslim ban” is a misnomer considering it affects only 13% of the world’s Muslim population.

The chasm between Americans’ increasingly polarized mindsets is troubling and only growing, so we decided to investigate further.

Dalia Research creates surveys to better understand how people think, so in our latest survey conducted in December 2016 we ran multiple questions to determine what best captures the difference between Trump and Clinton supporters’ diverging perceptions of the world, especially when it comes to issues like immigration. (You can see most of our survey questions and download the dataset on kaggle). It turns out our wild card question was the best illustration of this ideological divide.

We asked all respondents to choose between two polarizing statements: 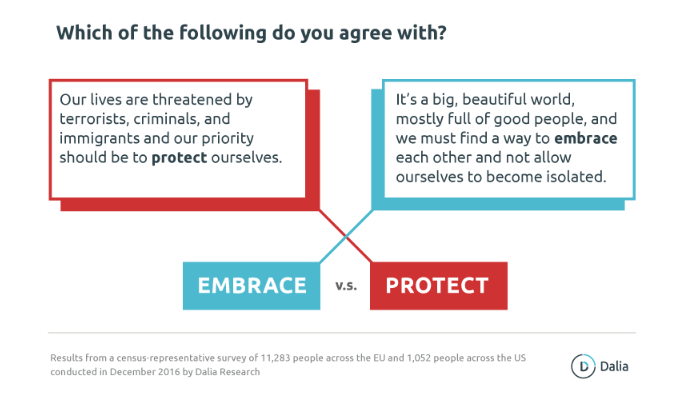 Under normal circumstances this goes against every rule of good survey writing. Ideally, survey questions should be straightforward and simple, avoiding emotional content, bias or ambiguous language. But for this question, we decided to implement an idea created by Stephan Shakespeare and Douglas Rivers at YouGov.  They used these two questions to push respondents to self segregate into polarized groups, adhering to two basic and opposing human instincts: embracing others or protecting yourself from them.

When we looked at the results of this test among Americans we found that overall, the divide is split down the middle: 49% choose the protect statement and 51% choose embrace. Women are more inclined to choose the embrace sentiment than men (55% v. 46%) and 57% of young people (14-29 years) choose embrace compared to 47% of those age 30 and older. 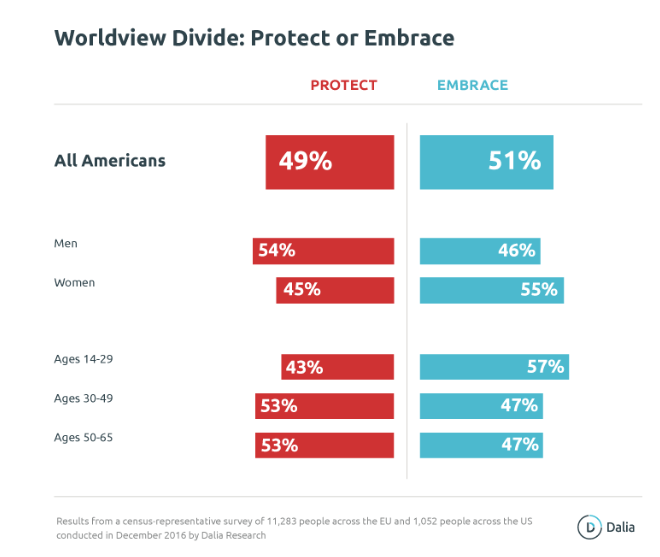 When sorted by respondents’ presidential candidate choice, the embrace and protect divide becomes much more dramatic. 76% of Trump supporters agreed with the statement “Our lives are threatened by terrorists, criminals, and immigrants and our priority should be to protect ourselves,” compared to only 30% of Clinton voters and 35% of those who voted for third-party candidates.

When we sorted respondents into groupings based on their political affiliation, from extreme left to extreme right, the results were straightforward. Americans who fall on the left side of the political spectrum were more likely to choose the embrace indicator (61%) whereas only 43% of rightwing Americans chose the same. Looking closer at the breakdown of the political spectrum, the range of those who choose embrace only spans 2 percentage points from extreme left to center left (from 62% to 60%). However on the right, there is a difference of 14 percentage points from extreme right to center right, with 67% of extreme right-wingers and 53% of center right-wingers choosing the protect indicator. 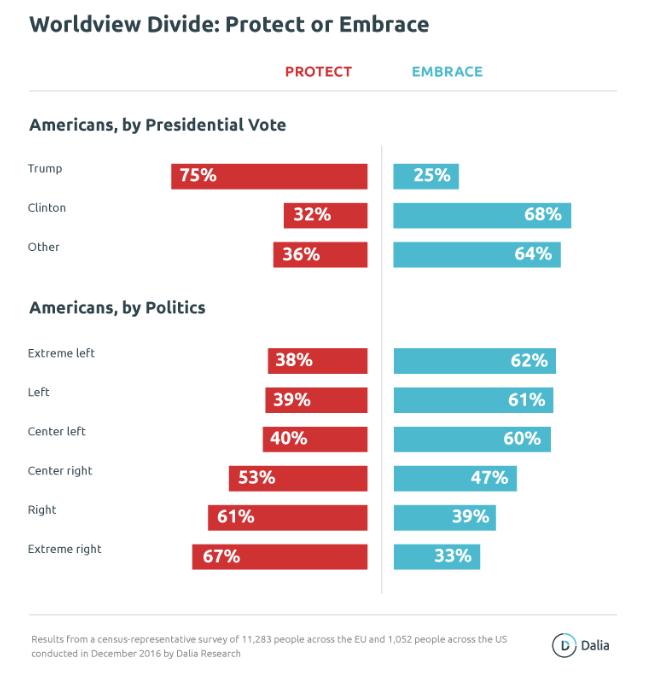 What does this mean for the future of the US and Europe and their attitudes towards immigrants?

The perception of immigrants as a threat is not only inaccurate, but it leads to the normalisation of further discriminatory policies of increasing magnitude.

In the next installment, we’ll be looking at the embrace/protect divide within Europe as a whole and with a country and demographic level breakdown. We’ll then go further and examine the results by political party in the 6 biggest European countries. (Be warned the results are not pretty…) We’re interested in understanding the public mindset in the context of the growing populist movements throughout the US and the EU.

Have any questions about the results? Interested in learning more about how to ask your own research questions in our next survey round? Get in touch!

This post is part of an ongoing collaboration between tbd* and Dalia Research on surveying public opinion to shed more light on a range of social and political issues.