A Syrian Story: Refugees Look to the Future

A video portrayal of the hope, diversity and mutual love among the Syrian refugee community.

Max & Tom are two filmmakers from Amsterdam. They are currently cycling the world, making documentaries about the stories that deserve to be told. They got in touch with us and asked us to share their story in Germany. How could we refuse?

They recently spent a month in Istanbul, interviewing and filming Syrian refugees. The result is an intriguing 5 minute documentary that shows diversity and mutual love among the Syrian community.

"A Syrian Story About The Future" from Freewheel Stories on Vimeo.

To give you a slightly better idea of where this story came from, what the motivation behind it is, and what impact stories can have, we spoke to Tomas Kamphuis about his video quest.

You’re cycling through the world telling stories in return for food and shelter. What is your motivation?

There are multiple motivations. Before this journey we were both working as filmmakers in Amsterdam, obviously with the goal to grow professionally.

We were taking on exciting opportunities while working in a great network of creative entrepreneurs. It’s tempting to go on working long hours because you see good progress. It fuels your ambition. But we both had the longing to see more of the world and do something that breaks with our daily routine.

" We had the longing to see more of the world and do something that breaks with our daily routine."

We figured that our work could function as an asset instead of an obstacle towards making a long journey possible. With that in mind we came up with the concept to create documentaries in return for food and shelter.

The desire to do independent work instead of commercial projects moved the idea towards this ‘story-searching’ quest. While finding stories is less easy than finding a company to work for, it’s much more rewarding on the long term. It allows you to do something meaningful instead of doing something for money. But also there’s total creative freedom.

About the cycling, as you might now, Amsterdam is cycling walhalla. You cycle everywhere: to work, friends, bars, supermarkets etc. So we figured, why not do all these things without sleeping at the same place every night?

When we tell people we’ve cycled about 4000km now, the first thing they ask about is all the hardships and effort. But to us, cycling is more like therapy than a physical challenge. It eases the mind and makes you reflect while enjoying beautiful landscapes around you.

Of course, there are moments where you’re climbing steep mountains and go through hard rain. But the experience as a whole makes you feel very much alive. It’s incredibly rewarding.

What impact do you think stories can have?

" We need stories to live a life that makes sense."

Apart from the philosophical there’s the term stories in a more creative sense. From this point of view we think storytelling can inspire, broaden understandings, create empathy and and make a subject or experience come to life.

Imagine listening to a beautiful track and you go “Nice music, let’s see what else Youtube has to offer.” Now imagine listening to that same track after reading a story about the artist. The story tells you how he lost his mother, lived in deep sorrow for 3 years but found help in a beautiful girl that supported him throughout these hard times. You then learn that the track you’re listening to is part of an album he wrote in this period. It’s likely that the story will influence the way you listen and will motivate you to check out the whole album.

What is most important when telling a story?

How do you find the stories you tell?

This has changed over the course of the trip. In the beginning we were very eager to create videos. So in pretty much every big city we started scrolling on blogs looking for interesting subjects. It has brought us to talented people and inspiring companies. This was how we found and made The Vibraphonist and The Magdas Family for example.

Now we’re more focused on letting stories come to us. This was the case with the last documentary ‘A Syrian Story About The Future’. We slowly noticed that we were cycling the route that refugees take into Europe. At the same time, a lot of conversations in Eastern Europe revolved around the refugee crisis. We realised that to not do a story about it, would be to ignore it.

Little signs have the potential to grow into a story. All you need to do is pay attention and slowly develop your understanding around that little sign by going to the right places and just listen. In this way, you allow a story to unfold without trying to mold it yourself in an early stage. 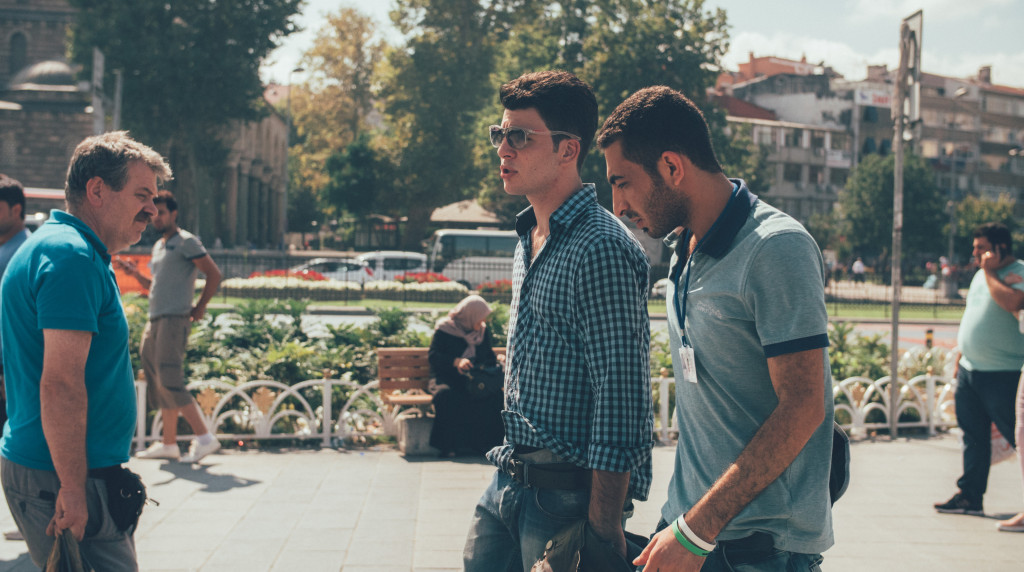 What was the most notable experience when filming ‘A Syrian Story about the Future’?

Usually after a good day of shooting, you feel satisfied. But this time it was different.

One specific moment, was when we interviewed the brother of the boy on skates. He told us that he and his little brother had fled Syria for several reasons. The younger brother had seen a man next to him being shot by a a sniper when he walked outside on the street. Their neighbours houses across the street were bombed. They had to leave. But they couldn’t go as a family.

They had to leave their parents behind because they were too old and too poor to have a future somewhere outside of Syria. During their first attempt to cross the border, they got beat up and robbed by Turkish police.

The second time they succeeded to enter Turkey. The guy who was talking to us was sitting there on painkillers with a broken hip, telling us his dream was to work for the Red Cross.

When we said goodbye, we decided to take a break. It was the last interview that day.

To find out more about Max' & Tom's experience getting to know Syrian refugees - read on here.