The Future of the Workplace

An exploration of four potential scenarios for how our ways of working will evolve over the next two decades.

Automation, artificial intelligence, the growth of the informal economy and shifts away from command and control power cultures are all trends that are profoundly shaping the workplace. But what will the future of the workplace look like? Of course, the honest answer is that we don’t really know.

This is why at Forum for the Future we create scenarios to explore how those trends we are certain about, for example urbanisation, might interact with uncertain trends, including those surrounding the speed and impact of automation in the work place. In essence, scenarios are stories of different possible futures, and in this project, specifically created to explore how global trends may change our world and our workplaces in 2036.

In order to create our scenarios, we conducted extensive research and interviews with experts on workplace trends around the world. We also created a timeline for each scenario, showing the pathway from 2017 to each of the four future worlds. To create the timelines we used ‘weak signals’, innovations and glimpses of the future that are here today. In order to bring the scenarios to life we also created ‘personas’ - characters that might live in these future worlds – and illustrated what their lives might be like in each scenario.

Meet John, a 40 year old health care worker living in the US. John is single and lives alone. Meet Claire, a 25 year old successful entrepreneur living in Europe. And meet Jahar, 20, a migrant worker in one of India’s coastal cities. He came to the city after his father’s cotton farm failed.

Let’s take a look at their lives in each of the scenarios.

This is a world dominated by big business and vast technological efficiencies. Half the global workforce has been disrupted by automation and inequality is high. Individual consumption and the accumulation of wealth drives the economy; security is precarious for most in the absence of social or economic safety nets, and high levels of anxiety are the norm.

How did we get there? In many ways this world is a straight line trajectory from many parts of our current global economy. In the 2020s we experienced a huge global recession leading to record low public funds, resulting in government having renegotiated their societal role, stepping back to provide only basic services.

In this world John works full time as a consultant in a high-end private hospital. Although he is well off, he works long unsociable hours and has little time for anything outside of work. He is beginning to feel socially isolated.

Claire runs a small business supplying designer homewares to a multinational retailer. She’s entirely subject to the changing whims of the buyers and their tough terms have locked her into low margins.  She works constantly.

Jahar works at the docks providing manual labour as an informal worker. He has no benefits, no protection, is just glad to have some work, but is feeling trapped. He can’t see a future where he realises his dream of repaying his family’s debt and returning to his home village.

A decentralised, entrepreneurial and fast moving world characterised by con­stant innovation and hi-tech focused on delivering a green economy. Work and health networks are global and fluid in a world where workers need to be self-directed and flexible to thrive.

Getting there? A timeline featuring a strong pre 2020 climate deal, scaling of the sharing economy and peer to peer lending and the first closed loop city. By the early 2030s competition for land between crops result in taxes on meat.

In Service Transformation John works as self-employed consultant on a telemedicine health network three days a week, and takes private patients for the other two.

Claire runs a national sharing and rental service for designer homewares. She is self-employed and self-directed, works long hours and most days. She spends most of her time on her own, interacting virtually with colleagues.

Jahar works informally at the docks and has joined a local guild of informal dock workers who have pooled savings to support each other in times of crisis. Although work is hard and demanding, he feels empowered by belonging to the guild. 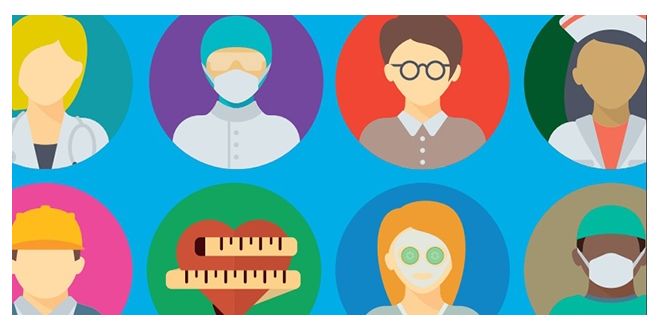 3. In the National Interest

This is a reactive world dealing with serious systemic crises and trying to stave off col­lapse. Business and healthcare have been subordinated to the national interest as countries enforce strict policy reform to limit consumption and waste, and the value of work is measured according to its contribu­tion to the nation’s survival.

The route to this world started with a failure to deliver a global climate deal, paving the way for sustained increases in carbon emissions. With no meaningful switch to renewables, climate impacts hit hard and individual countries hang on to their own energy supplies. Bi-lateral trade agreements are the norm, but by 2034 climate impacts are so profound that there is an emergency climate summit agreeing drastic measures to cut carbon emissions.  For many, this is too late.

John is employed full time at the main city hospital on a permanent contract, has a good quality of life, but misses the global interactions he used to have with colleagues around the world.

Claire runs a local repair, recycling and re-use service for homeware. The service is government funded, and she has to ensure it meets stringent standards. She still lives at home with her parents.

Jahar’s life is very similar to that described in Business Monopoly, but in the National Interest his employer enforces basic health and safety standards. However, he still feels trapped.

The fourth scenario, a world in transition to a new economic paradigm, triggered by a huge shift in mind-sets that has strongly pressed governments to prioritise wellbeing and sustainability over growth and consumption. There is a focus on human connection and community life builds economic and social resilience, with corresponding restrictions on individual choice.

How did we get there? The Paris agreement holds up, China and India only grow fitfully and seek alternative routes to social progress and there is a widespread resurgence in spirituality and religion as well as secular versions of the same. Increasing automation is linked to record unemployment, and fears rise about a generation without work. Japan, now approaching its fourth lost decade pioneers a new economic paradigm of low growth within planetary boundaries and prioritises wellbeing over consumption. In 2029, a universal basic citizen income replaces benefits across the EU and tax regimes are restricted.

In this world John is employed 4 days a week for the local health co-op on a permanent contract, in his leisure time he volunteers with the local sports team. He mostly feels good about life.

Claire runs creative workshops teaching people how to upcycle old homewares, she’s self-employed and has developed partnerships with other organisations such as colleges. She lives in a creative community

Jahar still works at the docks, and still doesn’t have a contract, but does have access to basic health and safety standards. Critically he has access to a company provided worker advisor who provides advice on setting up savings accounts and debt management. The work is hard and demanding, but is bearable, as he knows it is temporary.

What does all this tell us?

In all but one of the scenarios mental health and related challenges of loneliness, isolation and anxiety are common, as were poor lifestyle habits, including and not limited to lack of opportunity to exercise. Insecurity of employment and income also featured in most of the possible future worlds.

Which all means there are at least four areas for action all employers need to consider today.

In other words, we need to imagine the workplace we want, and set about creating it today.

A full copy of the scenarios can be found here. If you are interested in other research and insights into the future of the workplace, visit our Futures Centre.

This article was written by Sally Uren from leading sustainability non-profit Forum for the Future and was originally published in June 2017.