Circular Economy: “The Most Radical Idea We Can Afford”

We know that our current levels of natural resource consumption are not sustainable and that our planet is suffering. While it's easy to surrender in the face of this seemingly inevitable doom, there is something that can be done. Take it from Alice Grindhammer, who founded the circular economy hub CRCLR in Berlin-Neukölln, and who is working to change the system.

Upon entering CRCLR you immediately get the vibe of a spectacular place full of possibilities. The 2,000-square-meter former brewery building, with its raw walls, pipes running along the ceiling, and large windows, epitomizes the now fashionable Berlin aesthetic. Two upcycled hexagonal greenhouses serve as meeting rooms, and in the distance stands a huge transparent inflatable bubble, reminiscent of an Olafur Eliasson installation, which hosts group events. The bubble is beautiful, but more importantly, it can be heated, unlike the rest of the hall. That’s why, during the winter months, most people in CRCLR run around in their anoraks.

Alice Grindhammer herself doesn’t do the wasted vintage look. Instead, the co-founder of CRCLR sports an androgynous casual style and radiates joy and enthusiasm. While an earlier generation of environmentalists focused on inevitable doom, Alice belongs to a new generation motivated by the potential of positive change. “I always believed in business as a force for good. That’s why I studied finance. I really wanted to understand how we can create an economy which serves nature and humans.” 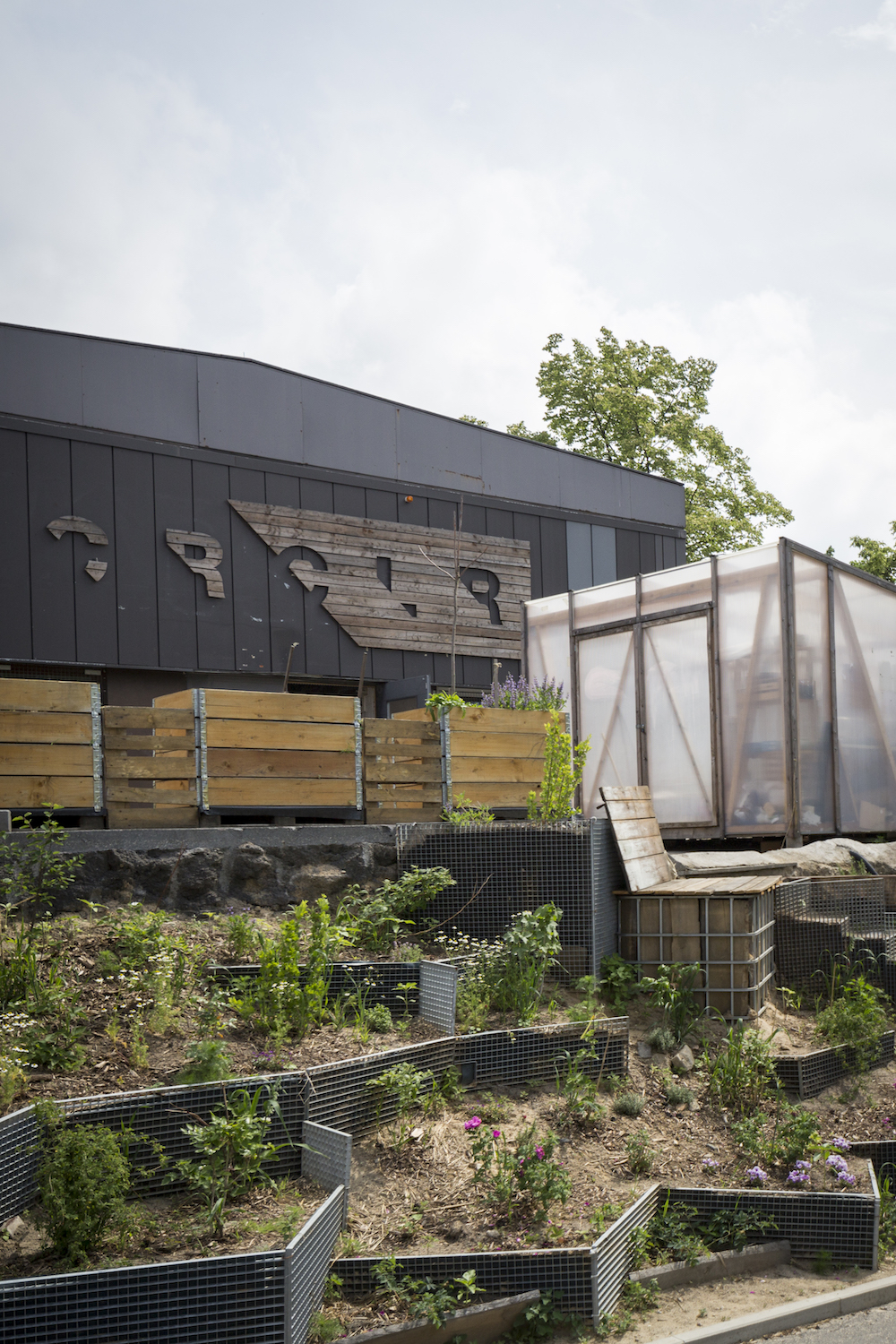 On my first visit, the CRCLR building was packed with a young audience attending the Open Circular Economy Days, a gathering devoted to sustainability know-how. Today, the space still contains the remnants of a feminist film festival. The rent from these events constitutes one revenue stream with which Alice and her co-founder Simon Lee pay their team. Other funds come from the initiatives which sit in the cordoned-off (and heatable) co-working area, as well as from consulting jobs. Just a few weeks ago, Alice won a public tender from the district of Neukölln to advise the local gastronomy sector on circular waste management.

"I really wanted to understand how we can create an economy which serves nature and humans." -Alice Grindhammer

But the vision of CRCLR is much grander. Over the next years, the ground floor will be converted into a large co-working area, while the basement will host workshops and production spaces. Fifty tenants will be accommodated on the first floor. The whole construction process will be a real-life experiment in circular building. “The construction sector is responsible for over 60 percent of waste in Germany, most of which is not recycled,” says Alice. The circular model, in contrast, ensures that materials are managed in closed loops. Products are designed and built so that they can be reused or repurposed after consumption. 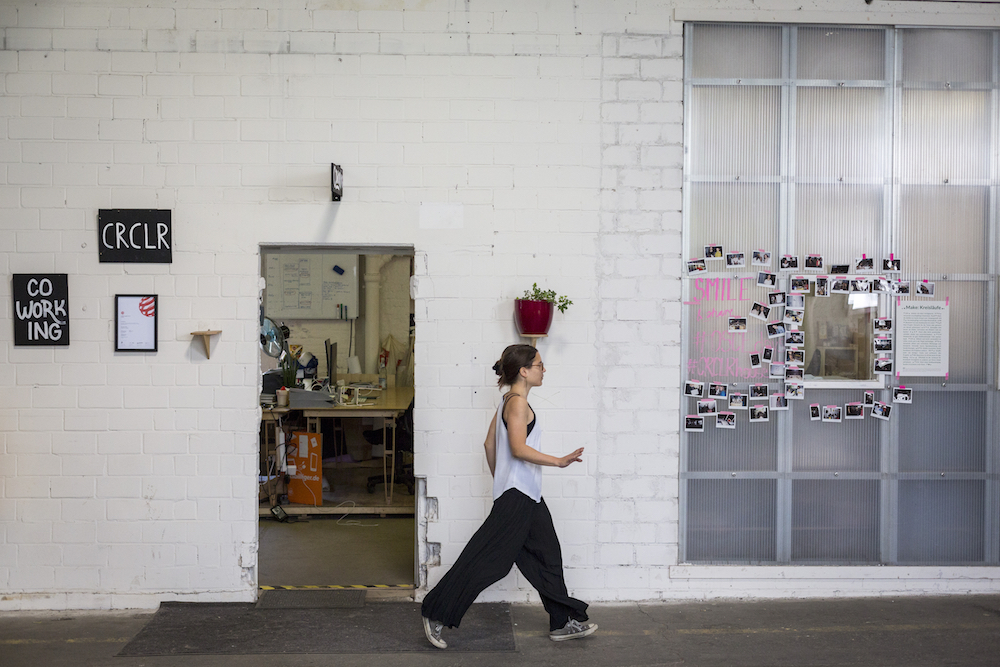 “Everything we learn along the way is shared. The circular processes we implement can be the basis for many new companies.” For all her enthusiasm and visionary power, Alice sees herself above all as a "pragmatic revolutionary." Upon moving into the building, which was filled to the roof with rubble, the team wanted to recycle everything. But they learned very quickly that this would take forever. Now, they implement “the most radical idea we can afford,” says Alice. “When we needed desks, we could have researched for months to find the most sustainable solution. Instead, we gave ourselves a few hours, bought the materials, and constructed the desks the next day.”

Alice’s can-do attitude already served her well in her first job as a trainee with a large German waste management company. “My mom thought it was hilarious that I wanted to work with waste. On my birthday she hid my presents in different trashcans around the house,” Alice remembers with a laugh. During the four-and-a-half years of her employment, she traveled extensively. In Jordan, she came across a huge toxic dump, filled with pharmaceutical waste from companies producing for the European market. In Afghanistan, she was responsible for the treatment of hazardous waste left over from the occupation. “I saw how waste was affecting the most vulnerable populations in the most vulnerable countries.” 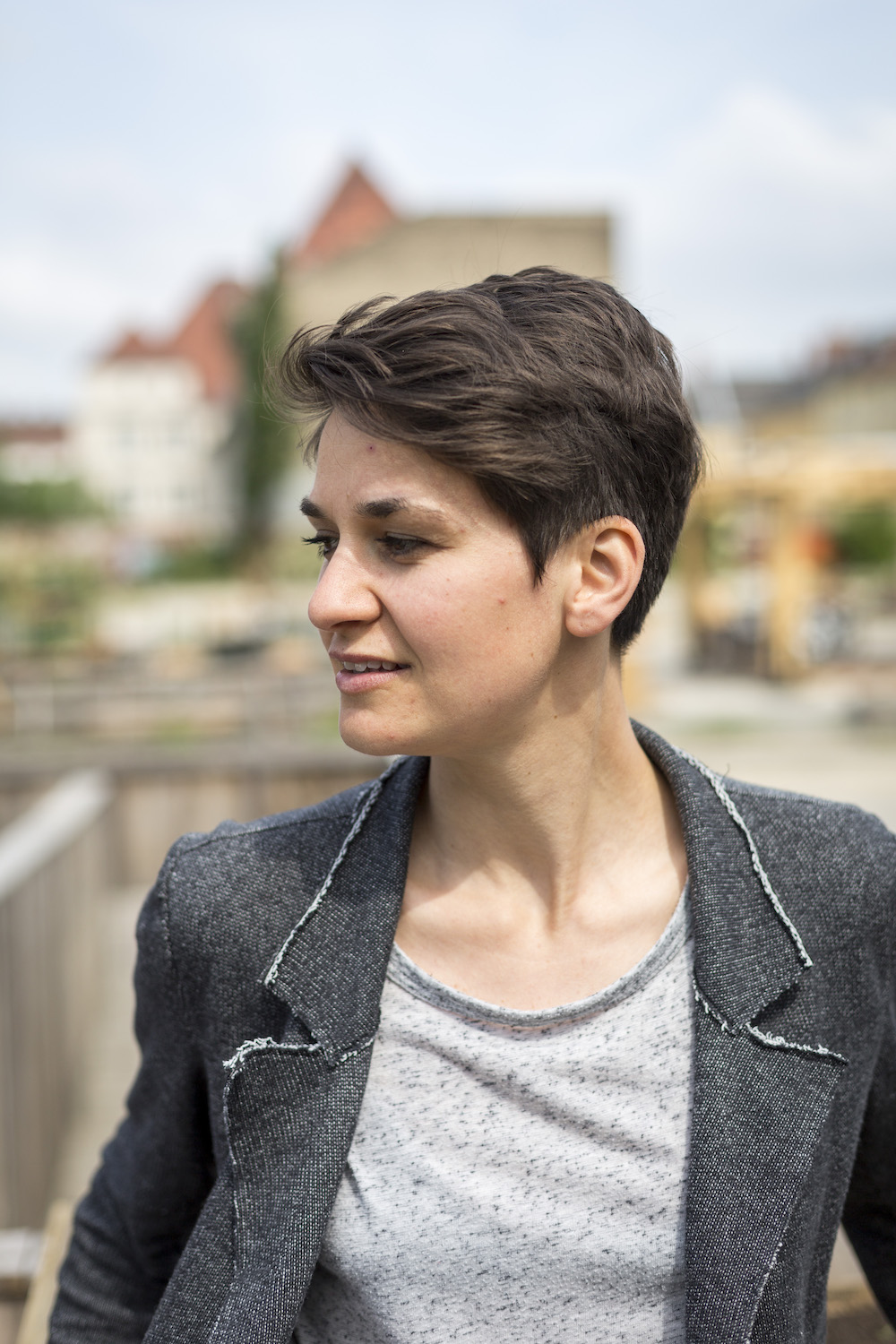 But she also felt a new momentum. In Kabul, Alice advised the government about transitioning to a green economy. She felt the timing was right to start her own enterprise. Most waste companies just cleaned up after others instead of providing holistic solutions regarding the whole production and waste cycle. “Working in the corporate world was a bit like doing karate, constantly looking for strategic openings and leverage points. There came a point when I realized I didn’t want to fight against something but rather collaborate with someone.”

"While most people thought there were no real business models for circular processes, I wanted to prove that they can be profitable."       -Alice Grindhammer

While exploring the Berlin social innovation scene in 2014, Alice came across the idea to start a hub for circular economy principles. “While most people thought there were no real business models for circular processes, I wanted to prove that they can be profitable.” Together with an early collaborator, she found the large brewery building in Neukölln. Even though their funds were limited, the owner seemed to be willing to sell. But at the last minute a real estate speculator outbid them. Alice was told she had five days to come up with an extra million euro.

What seemed to be a hopeless task was miraculously successful. The next day, Alice was introduced to Christoph Langscheid, CEO of the Swiss-based Edith Maryon Foundation. Grounded in the anthroposophical tradition, the foundation’s mission is to remove real estate from the investment bubble, making it available for long-term usage and socially compatible purposes instead. After one meeting and without the conventional due dilligence, Langscheid offered to buy the building, granting CRCLR a special lease for 99 years. 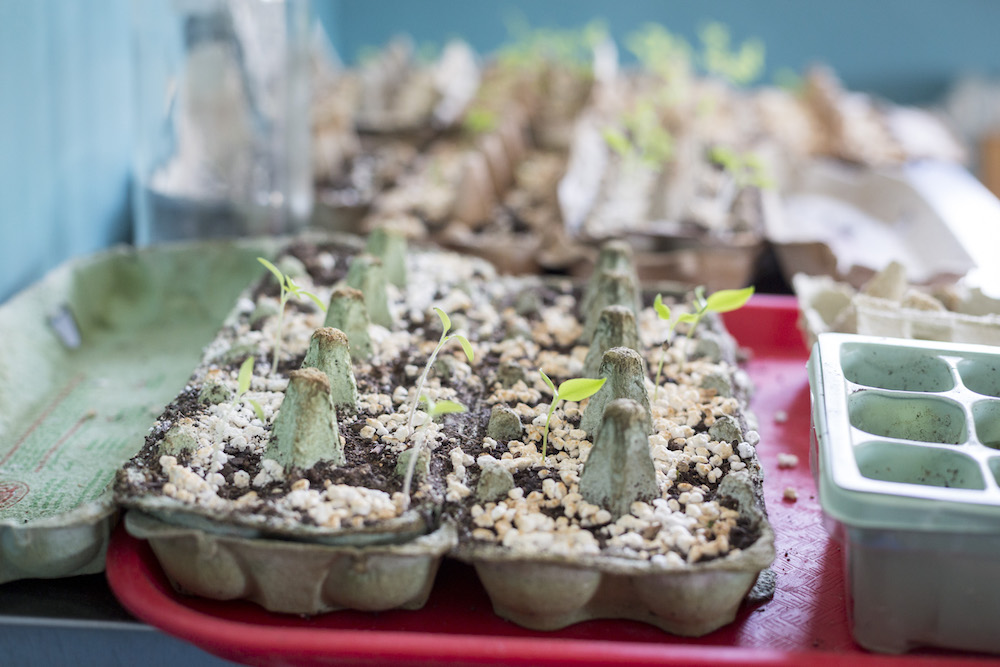 Since that day, Alice and her team have been busy finetuning their concept. So far, it’s been a journey full of iterations. “In the beginning, all we wanted was to create a value-driven sustainability business. But with time we developed a much more systemic approach.” Today they see themselves as eco-system builders, providing a hub for circular economy practices. As part of this mission, they advise not only young sustainability initiatives but also traditional corporates and municipalities who want to transform their value chains.

Instead of operating from a position of scarcity and mistrust of money, like many non-profits, Alice wants to challenge the prevailing culture of self-exploitation in the sector. “I am a fan of money,” she says. “To be successful, sustainability has to be profitable.”

In a similar vein, Alice insists on combining outer systems change with inner personal development. Early on, she realized that they had to foster a shift in mindsets. Collaborators need to have a certain level of awareness and specific values to make systemic change happen. 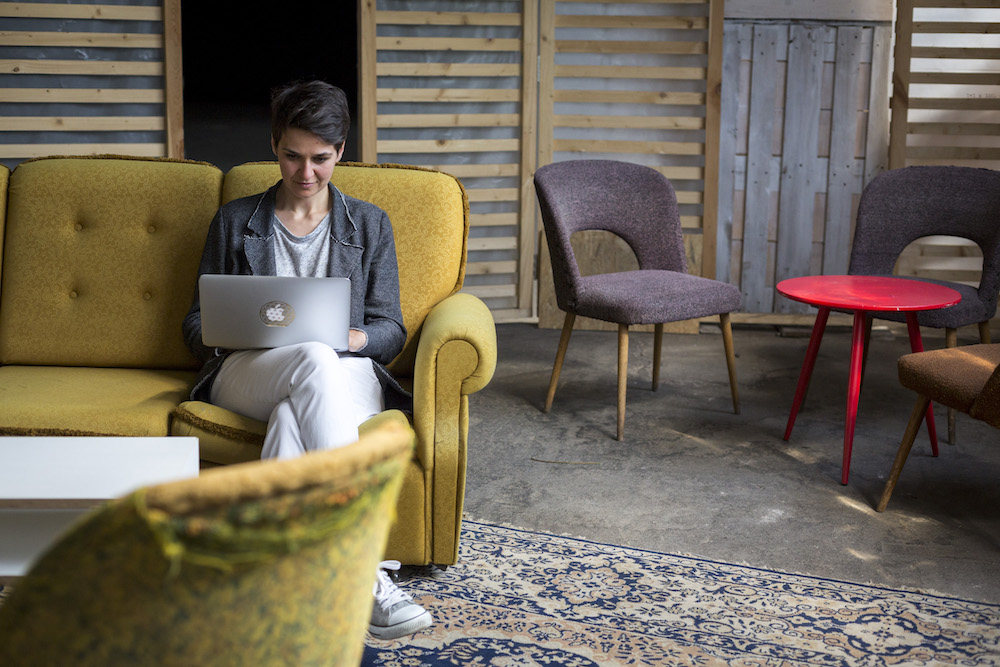 “We are no hippie circle. People must be able to take multiple perspectives and to talk to the CEO of a large company just as well as to journalists and our Turkish neighbors,” says Alice. She herself is masterful at engaging highly diverse people, connecting easily and readily asking them for feedback and help. She stresses the importance of “mistake culture”: “We need people who do what is needed today, while searching how things can be done differently and better in the future.”

In order to increase the self-awareness and communication skills of her team members but also to create a culture of inner wellbeing, Alice has invited meditation and yoga teachers, coaches, and mentors into the project. Early results are promising, with raised levels of commitment and more aligned work practices.

These assets will be crucial for the next steps of the company. Alice is well aware that the road ahead is steep. But equipped with a strong sense of purpose and surrounded with supporters who share her values, CRCLR is on its way to fulfilling its mission of creating “a better way to work and live together.”

All pictures by Marc Beckmann/Ostkreuz

Joana has a PhD in cultural anthropology and is the author of several books on the cultural impact of globalization, migration, and tourism. She is co-founder of betterplace.org, a crowdfunding platform for social projects. Follow @betterplacelab on Facebook!

This article is presented in collaboration with TwentyThirty and was originally published in 2018.