Struggling to make a career change into something more meaningful? Michelle Obama has the answers.

Whenever we face big life questions, we find that one of the best philosophies is simply to ask ourselves, what would Michelle Obama do? (Do we need to explain why?) In her memoir, “Becoming”, Michelle talks about many things, including her transition from corporate lawyer to executive director of a non-profit. She shared all the same fears that everybody has: how will I manage with a smaller salary? How do I build the right network? How do I get the right kind of experience? Will I like it? If you read between the lines, she offers a great ten step approach to overcoming these fears, and approaching a career change in a safe and smart way.

1. Acknowledge your feelings (maybe even start a journal)

When she was in her twenties, and already excelling in her first job as a corporate lawyer, Michelle suddenly felt the urge to start a journal. In a journal, there just isn’t anywhere to hide your truth. On the very first page, she wrote, “I feel very confused about where I want my life to go. What kind of person do I want to be? What contribution do I want to make to the world?” She later reflects on what that meant: “Really, it was simple: the first thing was that I hated being a lawyer. I wasn’t suited to the work. I felt empty doing it, even if I was plenty good at it”. So many of us get pulled into careers that we are good at, even though we don’t enjoy it. Our desire to excel, to “please” and to align ourselves with society’s expectations is usually stronger than our desire to find a job we love, especially when we are young. Not to mention the need to pay the bills. So we end up doing something we hate. Thanks, society!

2. Don’t worry about having no idea what you want to do

“Somehow, in all my years of schooling, I hadn’t managed to think through my own passions and how they might match up with work I found meaningful. As a young person, I’d explored absolutely nothing.” Guys, this is Michelle Obama talking! If this sounds like you too, then no need to worry. Michelle has been there too. And she’s got your back.

3. Listen to your wake up calls but don’t panic

For Michelle, the experience of losing a close friend to cancer at the age of twenty-six; meeting Barack - a man who had always followed his passion and already seemed so fulfilled by the community-organising he was doing; and an article in the New York Times about widespread stress, fatigue and unhappiness amongst female lawyers, were all wake up calls. They were the prods she needed to know that she needed a rethink. But she didn’t run out and quit her job immediately.

Michelle first made some lists. She started with the issues that interested her: “education, teen pregnancy, black self-esteem”. But she also considered what kind of life she wanted outside of work, “I wondered if I could find a job that engaged my mind and still left me enough time to do volunteer work, or appreciate art, or have children. I wanted a life, basically, I wanted to feel whole”. And then she made a list of her essential expenses: student loans, car payment, food, gas, insurance, rent. She wasn’t naïve, or privileged, enough to accept earning too little. But she was realistic enough to know that she would need to take a considerable pay cut, and idealistic enough to know that it would absolutely be worth it. 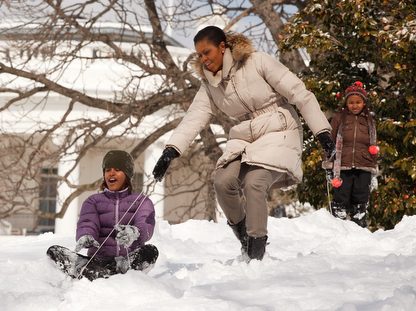 Michelle and her daughters in the snow; © White House (Pete Souza)

5. Know which advice to heed, and which to ignore

After a particularly grueling project at the lawyer’s practice, Michelle admitted to her mother that she was unhappy at work and felt like she needed to make a move. She was honest with her about what it would mean financially and how much that worried her. Her mother listened carefully and then said, “If you’re asking me, I say make the money first and worry about your happiness later.” Many of us have probably had similar conversations with our parents. Because the question of fulfilment has a lot to do with privilege. Our parents’ priorities were often different. Michelle’s response? “There are truths we face and truths we ignore. I spent the next six months quietly trying to empower myself without making any abrupt change.”

6. Keep believing in yourself

When Michelle’s father died, this was the moment she acknowledged that it was time to start being more proactive, “Life is short and not to be wasted. If I died, I didn’t want people remembering me for the stacks of legal briefs I’d written or the corporate trademarks I’d helped defend. I felt certain that I had something more to offer to the world. It was time to make a move.”

7. Build your network but get creative

“Still unsure of where I hoped to land, I typed up letters of introduction and sent them to people all over the city of Chicago.” OK, this was the 90s, so an email may be more appropriate. But hey, if you want to stand out, maybe a letter is the way to go. Whatever you do, don’t just show up at people’s office. That’s offensive and intrusive and shows that you don’t value that person’s time and their autonomy.

8. Use what you’ve got to get what you want

Michelle originally reached out to legal departments of the organisations she wanted to work in, even though she didn’t actually want to work in the legal department. But she realised that, given her background, these people were more likely to respond. Indeed, some did, inviting her to meet them for lunch or coffee, even if they had no job to offer.

Finding a meaningful job is entirely different to finding any other job. “Over the course of the spring and summer of 1991, I put myself in front of anyone I thought might be able to give me advice. The point was less to find a new job than to widen my understanding of what was possible and how others had gone about it. I was realizing that […] my fancy degrees weren’t going to automatically lead me to fulfilling work. […] I would need to hustle and learn.” A few of the people that she met during these few months turned out to be some of the most influential people in her career, good friends, and the very best mentors.

«Michelle had found her purpose, and you can too.»

10. Don’t think it has to be the dream job immediately

Getting a foot in the door of the non-profit sector is a challenge, so whilst it is important to find a general field which seems matched to your strengths and purpose, you can also use your first job as a springboard into something more suitable. That’s exactly what Michelle did. She went for a job which bridged her old and new career, at the Mayor’s office and then, having built a profile for herself and a strong network, from there to executive director at the Chicago chapter of Public Allies. Public Allies is a non-profit that funds apprenticeships, training and mentorship in public service and non-profit work for underprivileged, promising young leaders. Of this work she writes, “To me the job felt almost like destiny […] For the first time in my life, really, I felt I was doing something immediately meaningful, directly impacting the lives of others while also staying connected to both my city and my culture. […] In hindsight I think of it as the best job I ever had.” Michelle had found her purpose, and you can too.