Learning at the School of Peace and Empathy

On the outskirts of Santiago de Chile, a school gives children from broken families a chance at finishing school and teaches them the basics of ecological farming. The idea came to the founder, Mary Anne Müller, in a dream.

Seen from a purely statistical point of view, there will be the occasional visitor, out of the many thousands who annually visit the Pirque Agroecological School, who will ask a really stupid question. “Once somebody asked a girl what it was like to study in such a perfect environment only to return to her family and poverty in the afternoon. I mean, how can you ask such a brutal question?” But when she heard the girl’s answer to the question, the anger of school principal Mary Anne Müller turned into delight. “The girl stood up and said: ‘You got it all wrong. That’s exactly the point: I return to my world and help change it.’ Isn’t this wonderful? She put it in a nutshell!”

But it is also easy to understand the man who asked the stupid question. The contrast between the school idyll and the social hardships of a divided Chilean society is really striking. Here, at the southern outskirts of the megacity of Santiago de Chile, where the smog lightens up a bit so that you can see across plantations to the snow-covered Andes, visitors enter a small paradise: classrooms in bright pavilions scattered across twenty acres of land, barely visible among the lush vegetation. Add to that fields, meadows, vegetable plots, a pottery workshop, beehives, goat stalls and chicken coops, a grazing cow – and lots of bustling activity. Young people in working clothes who dig, weed, milk, water, and cart around topsoil in wheelbarrows. There is, of course, also a soccer field where you can always find young soccer wizards tiring themselves out even after a day’s work in the fields. 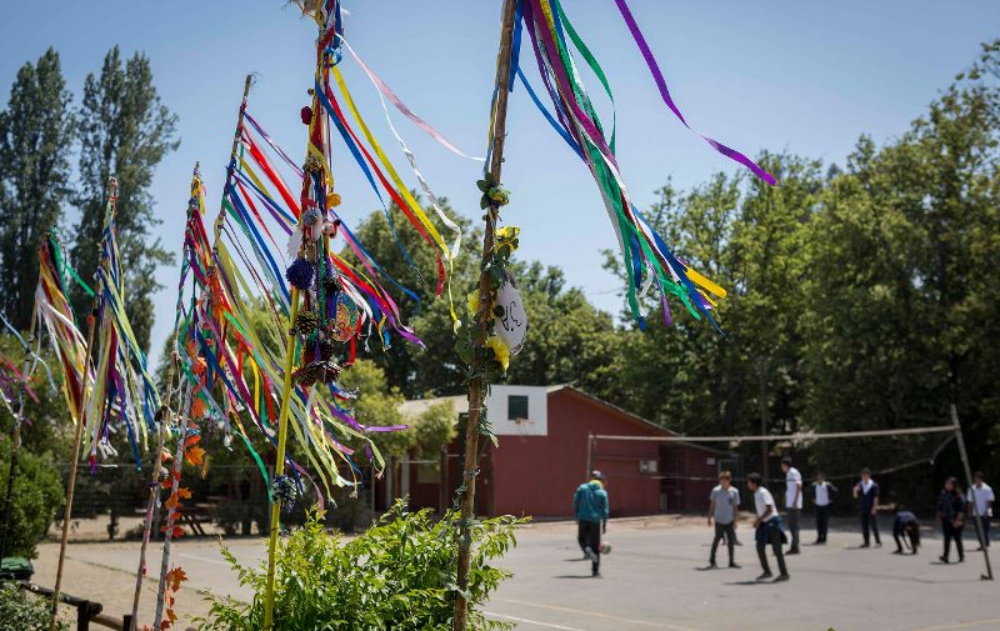 Latin American normality embedded into a utopian concept of a more just, empathetic society – the program of the Agroecological School makes it tangible: The approximately 430 lucky students attending the school are specially selected. They come from socially disadvantaged, often dysfunctional families, most of them have a rural background. The school makes it possible for them to earn the state-recognized high school diploma that qualifies for university study and/or prepares them for job entry by providing vocational training in technology and agriculture. While the school is non-denominational and only seeks to teach the students the universal message of love and peace, Mary Anne Müller’s own preference for Eastern spirituality when it comes to passing on everyday values – prevent suffering, increase happiness – runs to a sort of secular Buddhism.

Maybe “applied Buddhism” would be a more fitting term. When dealing with the students and their problems on a daily basis, the ideological-religious superstructure quickly boils down to several highly pragmatic educational methods. “Young children who have experienced major injustice and who have been abused or depressed have a lot of anger and frustration inside them. They first need to learn to look at their feelings and calm their minds,” explains Mary Anne. As a result, the curriculum contains a weekly learning module called “Bodhisattva training.” Developed by Mary Anne herself, it is based on the insight that, as an “agroecological,” one needs to take care of the students’ inner state as much as of the outside fields. This works particularly well in a community that continuously seeks to grow its empathy by taking care of plants, animals, and the environment. In a place where there is so much collective feeding, watering, and farming going on, it is also possible to harness and redirect one’s destructive forces – as a fertilizer for one’s own future, as it were.

Since the establishment of the Agroecological School in the early 1990s, the team of teachers and staff has grown to over 100. All of them have contributed their bit to the development of these methods, emphasizes Mary Anne. But ask her about her own past and the background of the school’s founding, it quickly becomes clear that it really grew out of her own (emotional) journey. She, too, had to learn to channel her anger, with the difference that her anger was not the result of social discrimination. Quite the opposite.

“In the 1960s, when I was six, seven years old, we lived in a house in Santiago which was separated from the outside world by a gate. One day, I stood at the fence and saw a girl my age on the other side going through our garbage, looking for something to eat. This was a shock and a freeze-frame moment in my life. For the first time, I thought: Why was I born on this side of the gate and not on the other side?”

Her indignation met with little understanding from her family. As typical representatives of the largely conservative Chilean elite, they told themselves a totally different story of the country’s social realities: a pitiable girl from a poor family that was probably too lazy to work. The bigotry of her family and relatives was only further fuel for Mary Anne. She still remembers how she, a grade school student, one day went to her father’s wardrobe to dress the way she imagined a state president would dress and how she practiced a rousing talk in front of the bathroom mirror: People from Chile, we will end poverty! 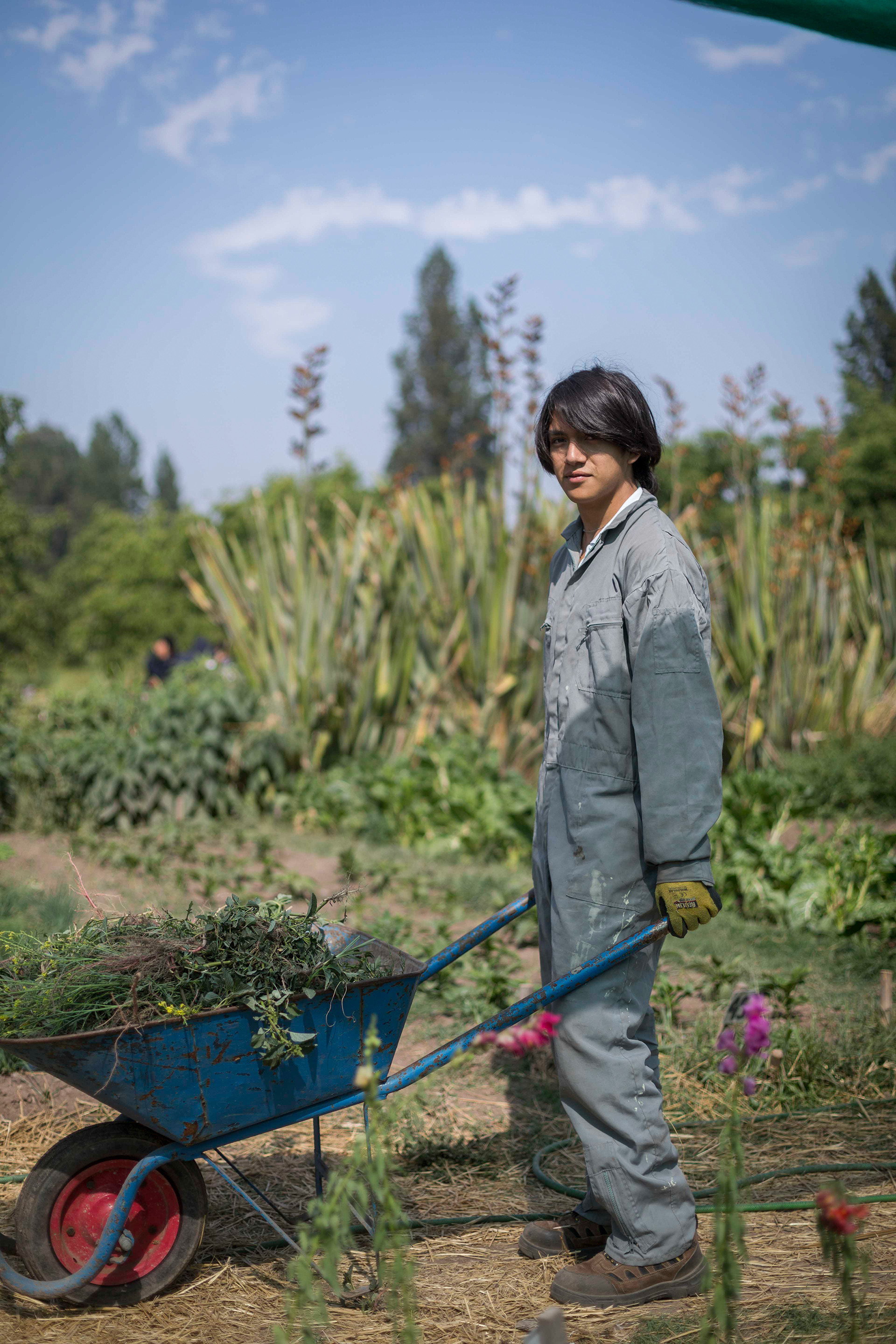 As a result, her parents eventually sent her off to a boarding school in Switzerland, which only increased her rejection of any form of obedience and forced discipline. This was not mollified when she returned to Chile a few years later as a young adult and experienced first-hand the oppressive atmosphere of Pinochet’s military dictatorship. A child of rich parents who had enough anger stored up inside her to turn this sordid world upside down – but who, upon graduating from school, for a long time did nothing but wander about aimlessly: lots of travelling, a journalism internship here, volunteer work in a juvenile prison there, Buddhist workshops, trainings in many and sundry forms of therapy, and recurring identity crises: How can you improve the world if you have no idea where your place is in it? The lifestyle magazine Caras, where Mary Anne then worked as a fashion editor, clearly was not it. Or was she only a dreamer?

"If you are ready and open for opportunities, then everything will fall into place eventually."

The Mapuche Indians believe that there is nothing wrong with dreaming – provided that you are capable of understanding the messages sent to you by your ancestors via these night-time images. If you are, the messages can help you navigate your life. Today Mary Anne, too, is convinced of that. The dream she had in that time of disorientation was almost as detailed as a navigation system. It sent her a clear message what she should do: Go to the land of your grandparents, establish a school, and take care of the land together with the students.

“One always tends to think that purposefulness is the most important thing if you want to make a difference. My experience has been totally different: If you are ready and open for opportunities, then everything will fall into place eventually.”

Whether you believe in spiritual messages or not, the story of how Mary Anne Müller came to found the school is a combination of accident and luck. A few days after she had her dream, she was contacted by somebody from the Spanish Avina Foundation who was traveling the country to scout for social projects worthy of support: the EU development commissioner had promised sizeable funds. A friend and fellow editor at Caras magazine who knew about her ambitions had passed on Mary Anne’s contact information. So she and the Foundation guy met, and he was won over by Mary Anne’s concept, which at the time was really not much more than a jumble of ideas.

Supported only by a small group of innovative teachers, her search for a more open, empathetic form of education initially met with distrust from the authorities, which continued to be authoritarian also after Pinochet’s fall in 1990s. There once was even a raid on the school’s administrative office.

Today, the government regularly sends education ministry delegations for further training and even provides funding to the Agroecological School of Pirque, and the school’s working method is widely recognized. Everybody wants to take a look at the “origins model” which grew out of the early enthusiasm for educational innovation: giving children from dysfunctional families roots by engaging them with the laws of nature, so that they can grow up to transform society.

Today, not only the poorest have a place on Mary Anne’s farm. For many years, many families got on her case: We also want to have a school like this for our kids. We are willing to pay for it. But you don’t accept us. Now you discriminate against us!

“Eventually I thought to myself, Why not establish another school to finance the education of the socially disadvantaged students?” After all, if you want to sow the seeds for an empathetic society, you should teach values to all children.

Oliver Geyer is senior editor at the Dummy Publishing House in Berlin and works as an in-house-writer for the independent Dummy magazine. He is also chief editor of the political magazine "fluter.de," which is published by the German Federal Agency for Political Education.