Refugees Could be the Solution to Germany's IT Labor Market Crisis

Anne Kjær Riechert created a coding school for refugees as an answer to the multiple challenges facing German society.

When the “refugee crisis” rocked Europe in 2015, enormous pressures were placed on existing structures and institutions. There was not only a possibility but an urgent need to develop new ways of responding to the challenge of integrating refugees. This was the moment when Anne Kjær Riechert created the ReDI School of Digital Integration. Ben Mason talked to her about where the idea came from.

In moments of global challenges, old narratives often are no longer proving to be effective. New approaches complement the adaption of worn-out structures. But how can we innovate or reform our frameworks quickly enough to keep pace and to prevent organizations, or even whole sectors, from being swept away? However, sometimes the best innovations stem from conditions of change and uncertainty: Right in the middle of one of the most significant crises in Europe, Anne co-founded the ReDI School of Digital Integration in response to the refugee crisis in 2015. 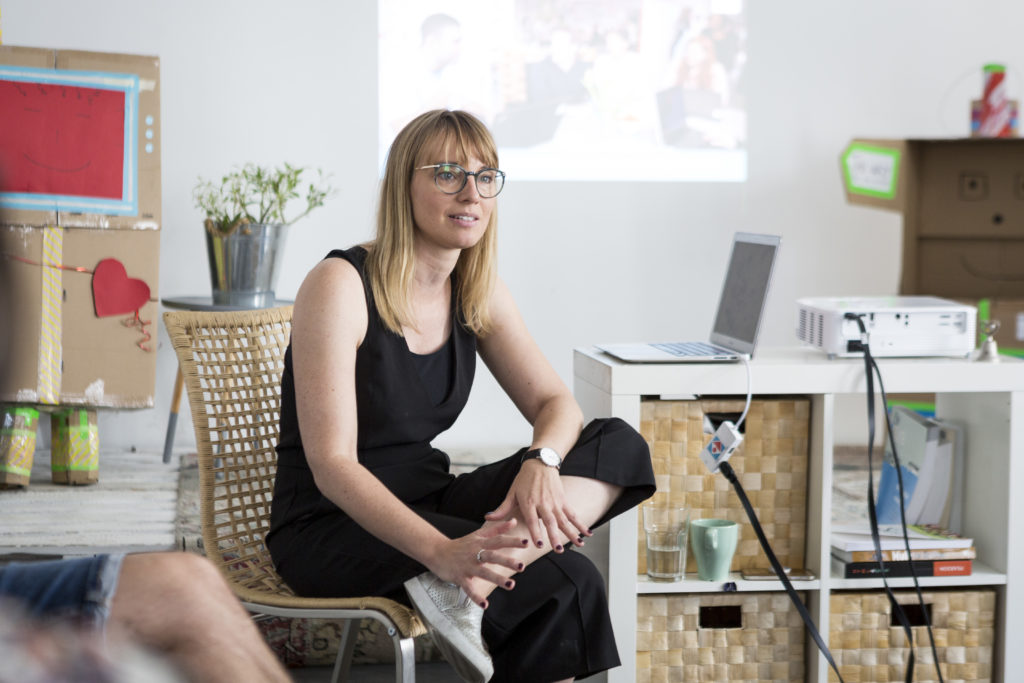 At the ReDI School of Digital Integration, a non-profit organization, asylum seekers and refugees are being offered a vocational training program teaching coding, programming and tech skills. When I meet her at ReDI’s main campus in central Berlin, it is semester break, and the rooms are quiet. But a few weeks earlier I had experienced the same space full of life, young people from Afghanistan and Syria standing in front of a group pitching their idea for a new app.

The idea of ReDI is an elegant answer to multiple challenges facing German society. On the one hand, the country’s economy – with its long-standing focus on manufacturing and an aging workforce – is under great pressure to adapt to the digital age. According to one estimate, there are over 50,000 unfilled IT jobs nationwide. On the other hand, the “refugee crisis” of 2015–16 saw over a million people, mostly from Syria, many of them young and educated, arrive in Germany – this presented various challenges of how to integrate and include this influx. What if some of these new arrivals could be trained as computer programmers? At a stroke, they could transform from a burden to an asset in Germany’s economic transition – and at the same time, not just individuals but refugee families and communities could get a stable financial footing. 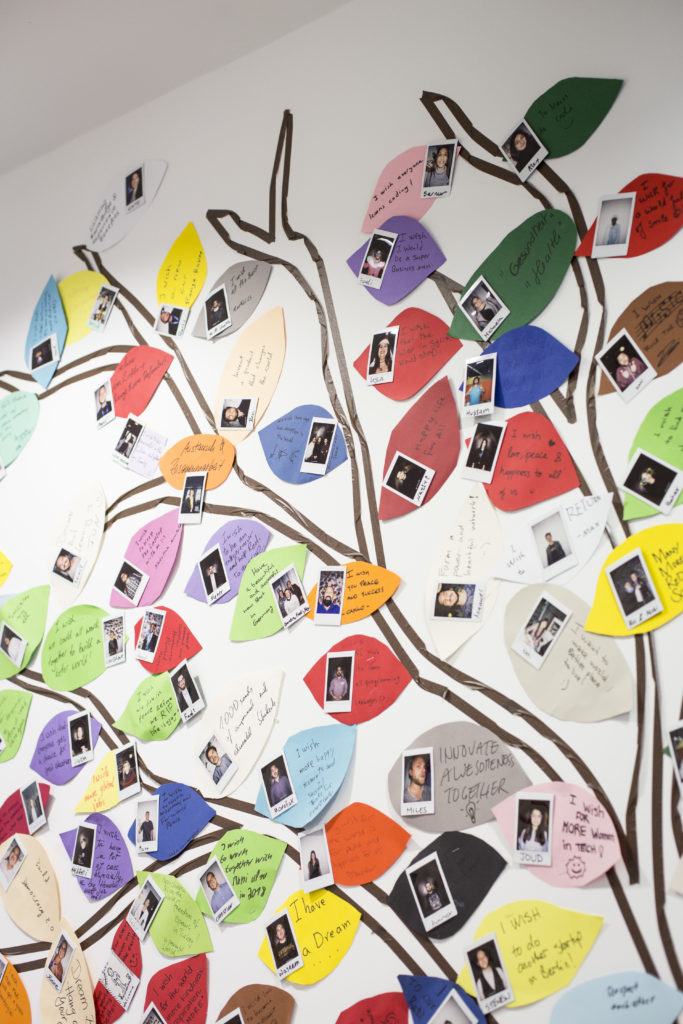 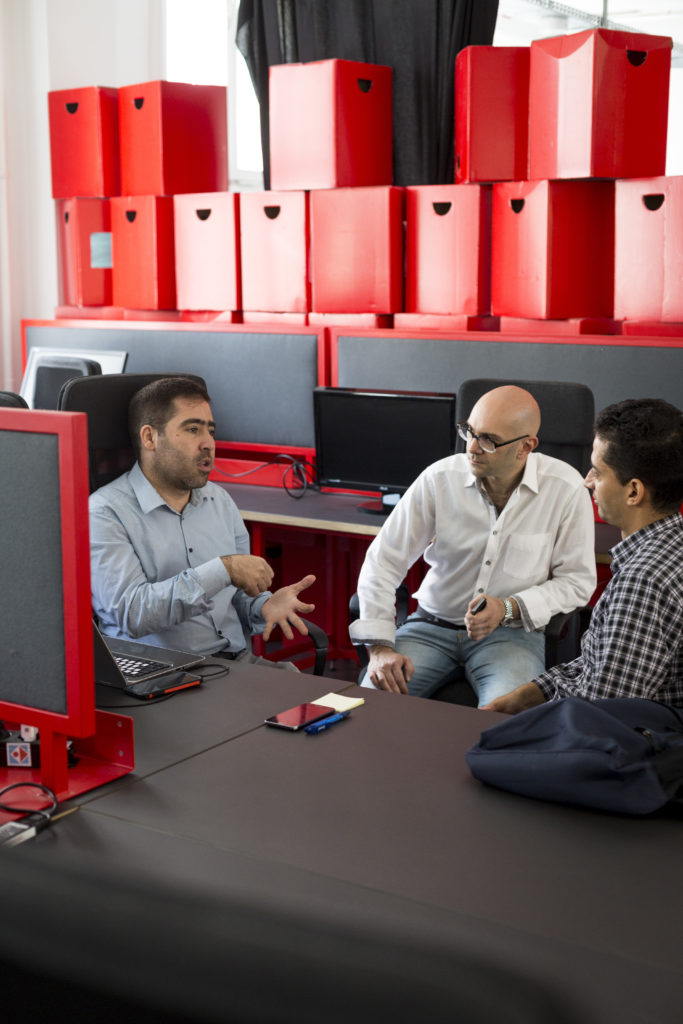 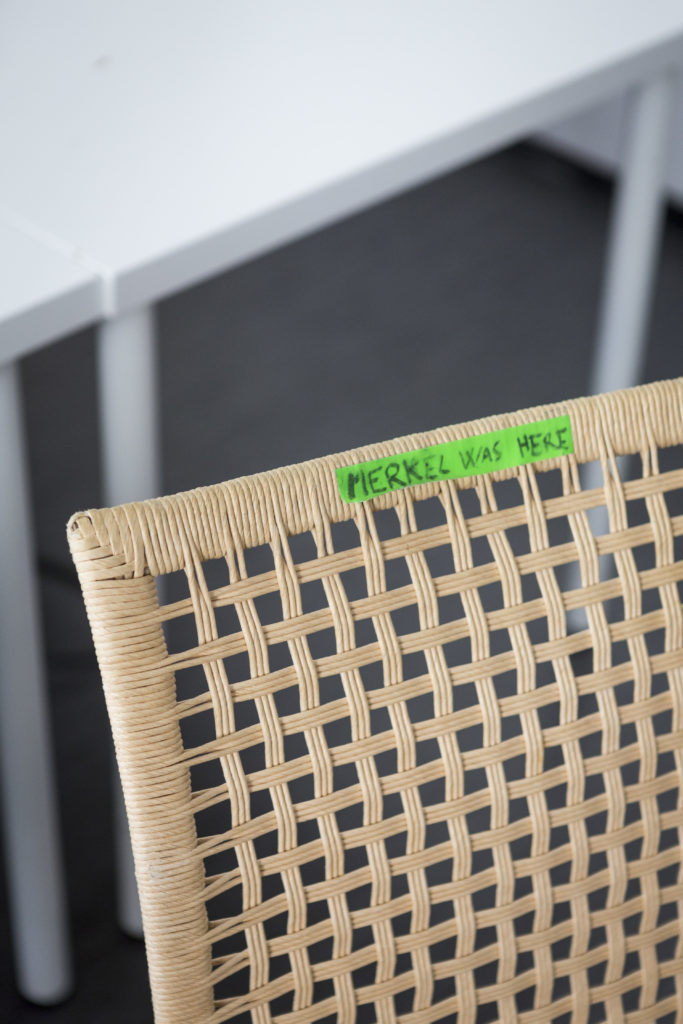 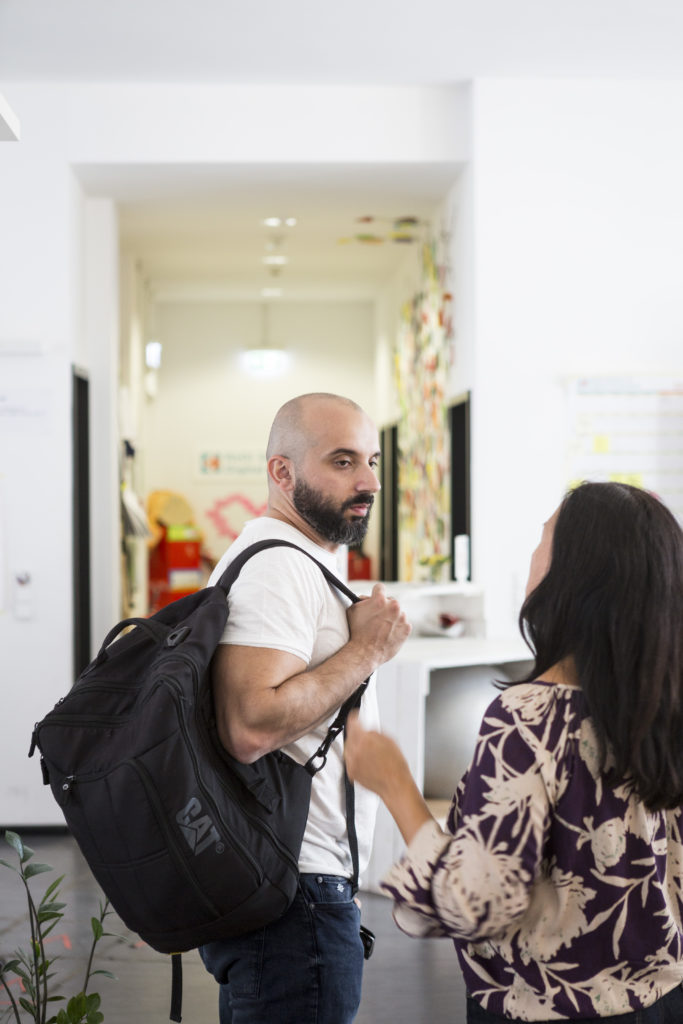 When I ask where the idea for ReDI came from, Anne does not start by talking about that turbulent summer in 2015, but goes back three years further. In 2012, she founded the Berlin Peace Innovation Lab in collaboration with Stanford PIL. The lab focuses on how technology is facilitating emerging and measurable social change towards global peace. The Berlin-based group is united by a desire to make an impact, and a conviction that innovative approaches and in particular tech-based approaches (hence the Stanford–Silicon Valley connection) could help do this more effectively. At regular meet-ups, practitioners and enthusiasts for social change would share experiences, ideas and inspiration. At the first meet-up, 30 people came; three years later in 2015, the Lab had become a sprawling and diverse community of around 1,700 people.

“Truly sustainable ideas, are not created by a single founder, but are born out of communities, a group of people with a shared set of values"

This community became the soil out of which ReDI could grow. “Truly sustainable ideas,” says Anne, “are not created by a single founder, but are born out of communities, a group of people with a shared set of values. And by bringing them together in a structured way, you get not one project, but several.” Before founding the ReDi School and setting up the Stanford Peace Innovation Lab, Anne Kjær Riechert graduated in 2006 from the Danish business and design school Kaospilot in Denmark. As a corporate social responsibility consultant, she developed and implemented Samsung Electronics’ corporate social responsibility strategy for Scandinavia. In July 2010, Anne moved to Japan, where she spent two years researching open social innovation and received the prestigious Rotary Peace Fellowship. In 2016, Anne was recognized by the German Capital magazine as “Young Elite – Top 40 under 40.” However, the ideal of leadership Anne describes seems to have less to do with decisively setting a direction and more to do with creating an enabling environment for others: “My strength is in bringing them together and guiding them through that creative process.”

Fast forward to 2015, as the rate of refugee arrivals was reaching levels unprecedented in Europe since the end of World War II. Tens of thousands of Germans were moved by the images filling their TV screens and wanted to help – but did not know how. The governmental structures and established NGOs trying to respond were pushed to breaking point. The need was acute, the willingness to help was there, but the structures to bridge that gap were missing. And this is where the decentralized network of the Berlin Peace Innovation Lab kicked into action.

Several members of the community had direct connections to the response effort. Anne joined one of the trips they were making to a reception camp. Out of a conversation with an Iraqi man who had been a software developer back home, an idea was born. True to her philosophy of open collaboration, Anne did not take this idea away and develop it; instead she posted on Facebook: “If we made a coding school for refugees, would you help?” The next morning, over 30 people had replied – professional coders offering to teach classes, people pledging laptops and donations. ReDI was born.

In the fall semester 2018, there were 410 students in ReDI’s main program, alongside smaller programs aimed specifically at refugee women and children. Since the foundation of the first ReDi School in Berlin in February 2016, more than 500 immigrants have been trained for the German IT labor market. Around 250 teachers from 26 countries volunteer their time at the ReDI School and accompany refugees and migrants on their integration process. A second branch has been opened in Munich with 100 IT experts supporting the school. ReDi was able to establish a solid network of partnering companies who help maintain the classes free of charge for the students. With great success: about 26% of the graduates get a job in IT afterwards, another 12% work part-time, and around 18% study at university afterwards.

But for me, having closely followed ReDI’s journey from its early days, its most defining quality is not captured in numbers. It is this sense of inclusive and empowered community, which characterized the way it was set up, but which directly translated into the experience of its students. What newcomers find at ReDI is more than a school; in fact, many of them talk about the ReDI “family.” 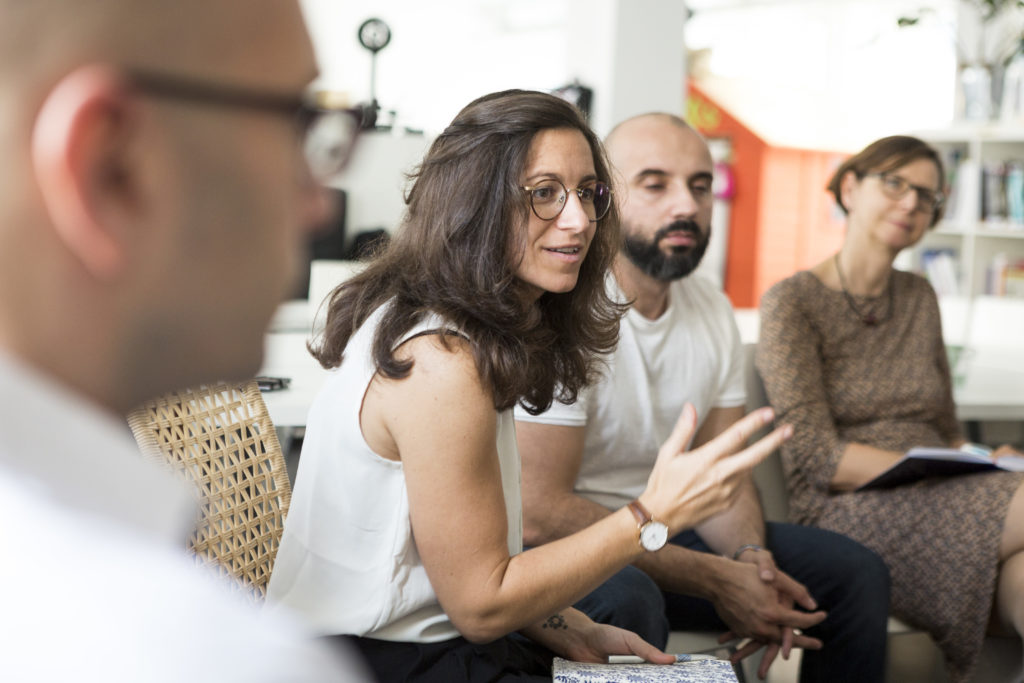 For people who may have endured unthinkable loss, and then spent months subjected to a confusing and depersonalizing system of bureaucracy, it can provide relief, an anchor, to be in a setting where they are not defined by where they have come from, but are seen for who they are and what they can contribute. This is reflected in the ReDI alumni network, many of whom are deeply loyal and active, coming back to volunteer and to teach the students who come after them.

As for Anne, she has plenty of plans and ideas for ReDI – but she also hopes sooner or later to have time to return to the Berlin Peace Innovation Lab. What motivates her is essentially curiosity about with whom and how the creative impulse will emerge next, mixed with idealism, a sense of responsibility and a deep concern for our societies and our planet. She says: “Sadly, in many ways, I think the work of the Peace Lab is even more important now than five years ago.” 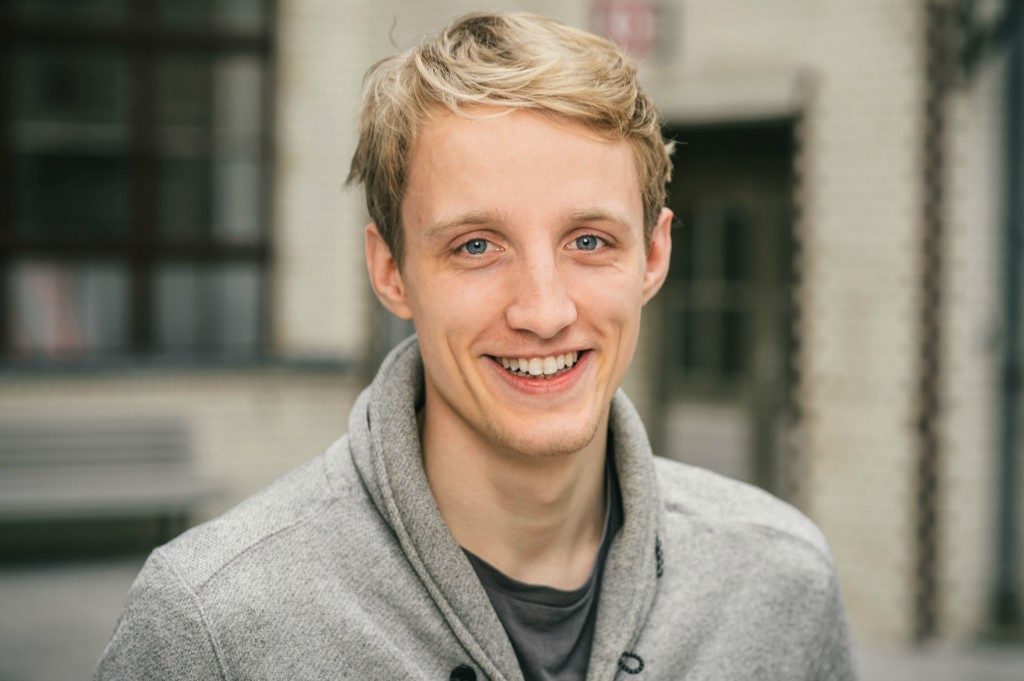 Ben Mason works at betterplace lab and since 2016 has led the lab’s work on innovation in the field of refugee integration. This work has included the reports Digital Routes to Integration and ICT4Refugees.