How the World Has Changed in the Last Five Years

How have megatrends like globalization, digitalization, climate change and resource scarcity shaped our lives?

As we kick off 2016, let us take a minute to reflect on the years gone by. Or more specifically the things that have changed in the past five years. How did megatrends such as globalization, digitalization, climate change and resource scarcity shape our lives? What is fundamentally changing when it comes to societies, commodities or technologies? And what does this mean for the way forward?

"December has been the warmest in Germany since the beginning of weather recording in 1881."

I have compiled a list of 42 things that changed (or just didn't), which deserve our attention. They can be seen as essentially representative for what's going on in the world today - and they most certainly will continue to play a large role in shaping our world. 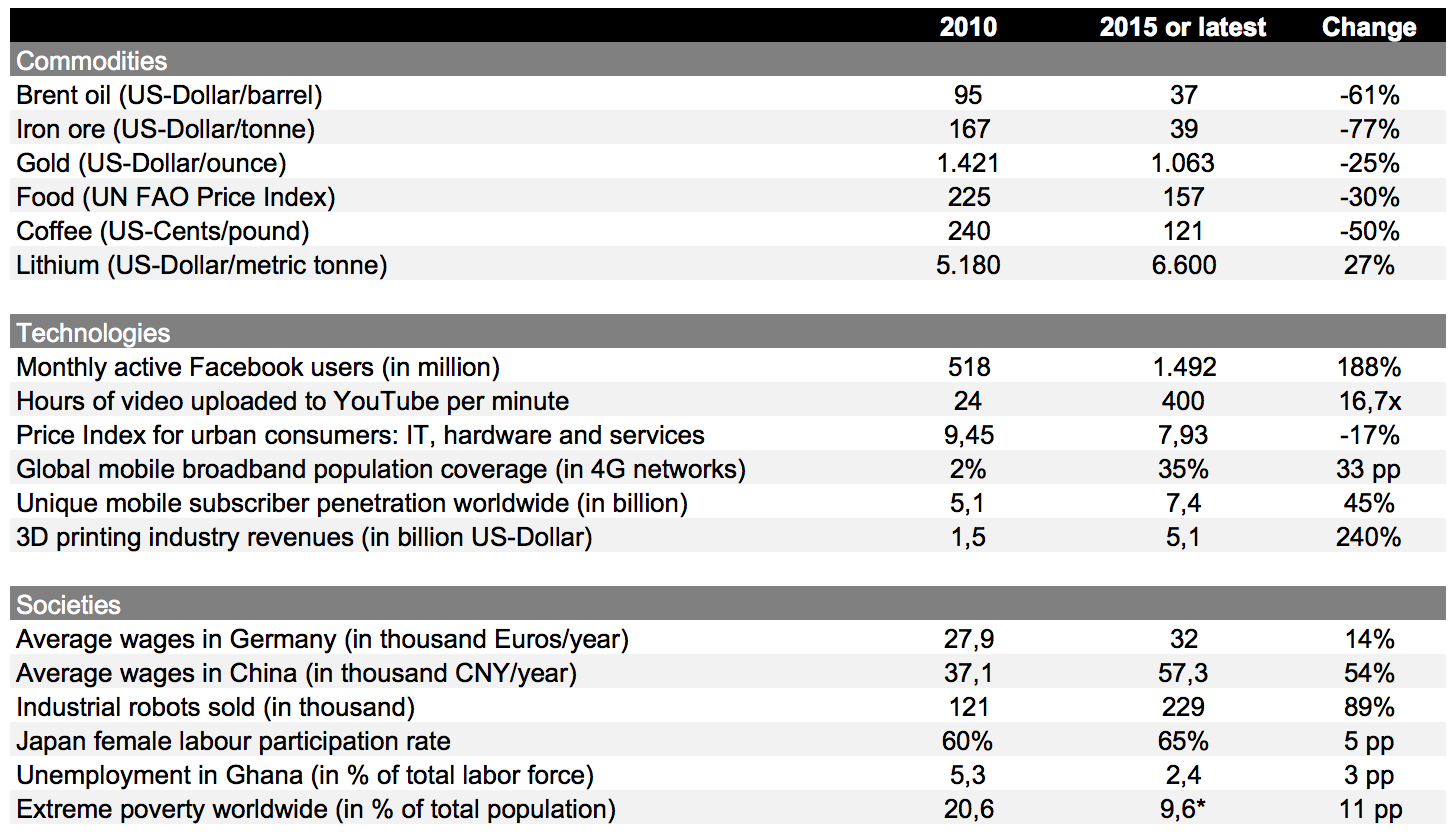 It doesn't seem that long ago, but some of the changes that occured in this short time are quite astonishing. Perhaps most obvious and currently prevalent are the rising global temperatures. This past December has been the warmest in Germany since the beginning of weather recording in 1881, with an average temperature of 6.4 degrees Celsius. Though just in 2010, it was -3,5 degrees on average. Even Rome had a freezing -4.0 degrees Celsius back then!

Another highlight is the rise of the sharing economy, with Airbnb being a shining example. How often have you used their service in the last 12 months? Chances are, a lot of us helped make up the 17 million people who crashed in a strangers’ pad this summer. Without a doubt, the underlying business model is a stroke of genius, meeting both sides of a changing marketplace.

Yet others things have not changed as we might like. For instance, Africa's share in global trade remains staggeringly low. The continent continues to be highly dependent on commodities and this lack of diversity makes it difficult to be competitive on the world market, while also threatening its sustainable development.

These are just a few aspects of a world that is getting more complex and multipolar each and every single day. Whether it be demographic and social change, shifts in economic power, technological breakthroughs or natural resource scarcities – the world, and those of us in it, need to be more adaptable than ever before. The numbers may speak for themselves, but I’m certainly curious to see what new changes the world will hold for us in the near future.

This article was contributed by Daniel Anthes. The original version can be found on his blog.

*In late 2015, World Bank announced an updated poverty line of 1,90 US-Dollar per day, which incorporates new information on differences in the cost of living across countries.