A look at the reasons and hidden mechanisms behind the gender pay gap.

Were you aware that Germany ranks 24th in the EU in terms of the gender pay gap?!

That's right, according to the Business and Professional Women (BPW) Germany e.V., women earn around one fifth less than men. The data is derived from adjusted statements from 2019 that highlight the difference in earnings between female and male employees with identical occupations, comparable jobs and equivalent educational qualifications are therefore not possible. 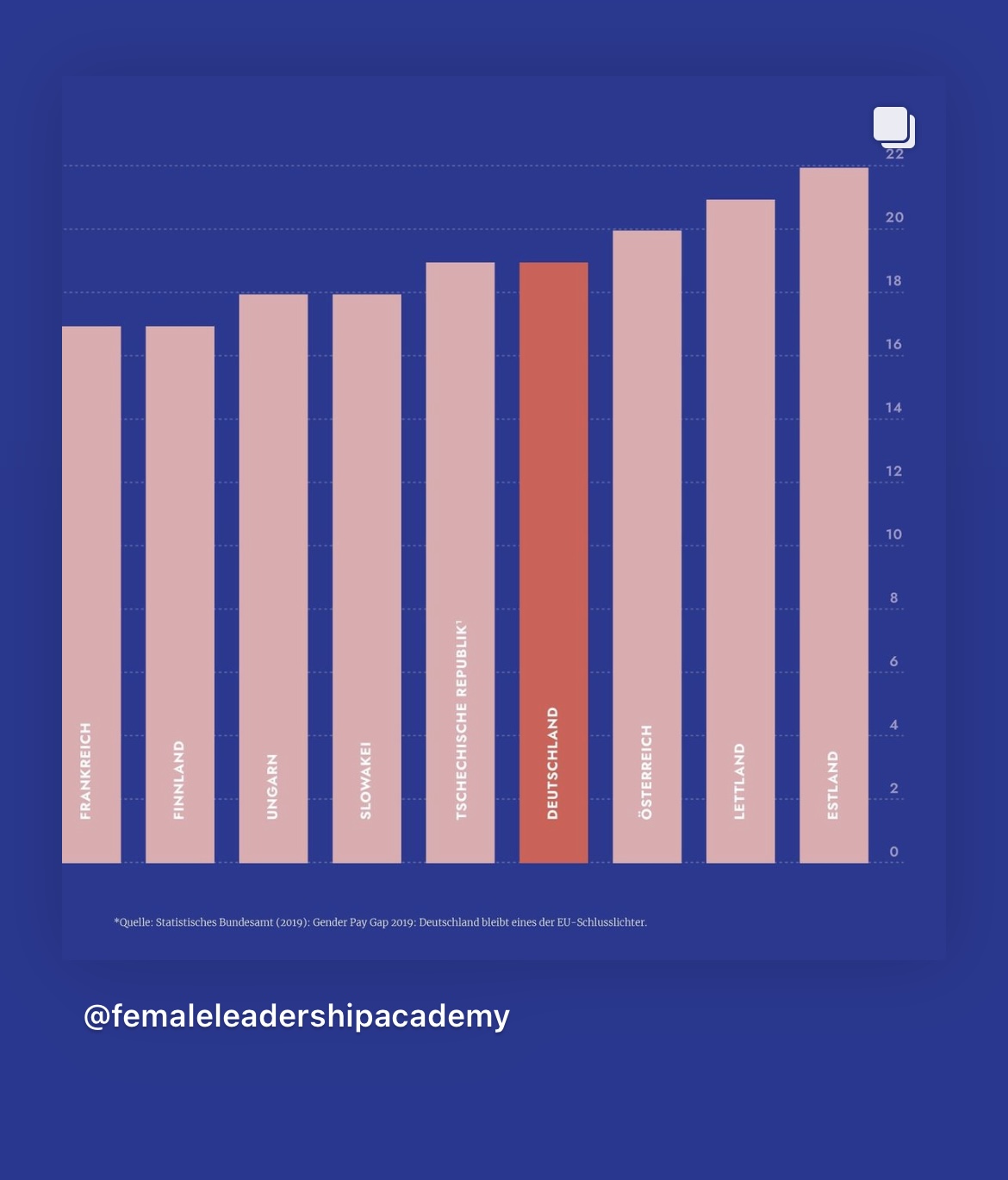 According to the Female Leadership Academy, the reasons for the gender pay gap are mainly these:

So what needs needs to happen for us to reverse this injustice?

Time to dig deeper. As usual for complex issues, there are countless reasons for the gender pay gap. Traditionally many of these are unconscious and are not immediately visible. Even though the causality might be unclear sometimes, I would like to point out some observations that I find particularly striking when it comes to differences between women and men in the work life.

Lower work experience has been stated repeatedly as the main reason for the lower salary paid to females. During their career, women work part-time more often and drop out of the work force more frequently due to family related interruptions like caring for their children or other relatives. This leads to fewer years of work experience and ultimately a lower salary. Moreover, mostly men are the ones who climb the career ladder leading them into highly remunerated executive positions. The glass ceiling is still intact in most companies and industries, preventing women - apart from a few exceptions - from rising into higher hierarchy levels. Fun (or sad) fact: In 2015, the New York Times found that in the USA fewer big companies were run by females than by males named John.

On the same topicThe Changer Gehaltsreport 2017

Education-wise women have caught up with men since the 1950s. Girls tend to have better grades in school than boys and at most universities the gender ratio is balanced. Therefore, during their studies or vocational training, many women are under the impression that females and males are indeed treated equally. But gender imbalance mostly begins when they start their working life and are confronted with old, conservative structures resistant to change.

One cause that many studies find to be the most persistent is the allocation of females and males into different industries and business fields. Many women work in lower paying industries like the education and care sector whereas many men work in generally higher paying fields like the manufacturing sector. Interestingly, there is a theory that female labour is generally less valued and thus compensated less than male labour. This holds also true for professions that require similar skill sets and qualifications. An HR manager (mostly women), for example, earns less than an IT manager (mostly male). A thought-provoking fact that I found, was that in business fields that changed over time from being predominantly male to female (e.g. housekeepers, biologists, or designers) or from being predominantly female to male (e.g. computer programmers) salaries have adjusted downwards or upwards, respectively.

Negotiation skills and perception of women and men

Another much discussed reason is negotiation skills. Men tend to have a higher self-confidence influencing their wage negotiations. Women are often not as confident about their strengths and more reluctant to demand a raise in their wage. So, one could argue that their lower salary is partly their own fault and they would just need to negotiate harder. However, in general, men and women are perceived and treated differently in the business context. Researchers at Harvard Business School conducted an experiment using the case of Heidi Roizin, a real-life successful business women and networker. The researchers provided a case study about her story to one group of participants and the exact same one to another group. The only difference for the second group was that the name Heidi was changed to Howard. Afterwards the participants had to assess the person from the story they had received. Howard was perceived as a likeable and ambitious guy who you would want to drink a beer with, while Heidi was seen as too career-oriented, egoistic und unlikeable, thus someone you would rather avoid.

Questioning those (non-exhaustive) reasons for the gender pay gap, I realised that the causes are more deep-rooted.

Girls and boys are still being raised differently. Gender Marketing has even been on the rise for the last decade. Simply put, it means: blue products and adventurer toys are exclusively for boys, whereas pink and princessy products are exclusively for girls. This highlights their differences rather than their commonalities as children. Also, the stereotypes of what is typically female and typically male are persistent: Boys are good at maths, science, and technical subjects and are expected to be strong and self-confident. Girls are good at arts and languages and are supposed to be caring and modest. Those patterns and expectations still affect our perceptions and behaviour as adults in both our private and working life. They drive us into different fields of study and vocational training and eventually to different industries.

An outlook: 118 years until gender parity?!

According to the World Economic Forum, it will take 118 years to close the gender pay gap if the current development continues. Looking at this number, it is important that we question our own realities and challenge current norms.

Knowing what is going wrong is already the first step to being able to change it.