What Happened When I Chose Bravery

How I learned that sustainable business benefits from a lot of trust, a good dose of transparency and plenty of courage.

Hannah, co-founder of Tamay & Me, shares the story of Tamay's visit to the UK in her third tbd* article about the challenges and triumphs of starting a sustainable business. Tamay and Hannah's products are sustainably hand produced in Northern Vietnam, where locally grown materials meet the traditional methods of Dzao textile production to financially and culturally empower Vietnamese aristans of Ta Phin.

In my last blog for tbd* I wrote about falling out of love with my social enterprise (luckily I fell back in love again). Following this, I planned to go for it… there were no more excuses, it was time to be brave and push all the buttons.

I had carefully lined up a series of events in the diary, all matching the specific marketing personas I had refined last spring. There was a pop-up shop planned as a collective with a few other great sustainable brands, I was taking part in a textile magazine’s Christmas sale, I had just been awarded a grant to spend £1000 on Facebook advertising and most excitingly, Tamay was booked to visit the UK! I pushed all the buttons to get things moving, I pushed myself further than I could afford and had the time to achieve. In honesty, I was terrified, there was potential that no-one would be interested, we are a hand to mouth operation, it was risky but I just knew I had to be brave. Despite the self doubt, I hung onto my seat and made it happen. It was completely invigorating. It was absolutely worth it. I put our brand out there in it’s most authentic form. People saw it, heard it and really began to engage (plus they bought … yesss!)

Tamay & Me had been ticking along in its existing state for 1.5 years, selling at events and developing our online presence. Everywhere I went to sell, it was the story that sold the jackets. It was Tamay’s story. Tamay is the star of Tamay & Me– she runs all the production of the garments in North Vietnam. She lives in the mountains, in a village called Ta Phin. She has lived there her whole life; it used to be very quiet and remote but in the last 20 years it has developed to become a tourist hotspot. She has only had electricity in her home for the past 8 years and has led an almost entirely self-sufficient lifestyle since she was a child. Textiles are at the heart of Tamay’s culture, clothing means so much more than just putting something on in the morning. This is the driving heart and soul of our brand Tamay & Me– it is complex and often difficult to put across in a blog post!

I decided that it made sense for Tamay to come and tell the story herself. I wanted people to be able to meet Tamay and for Tamay to be able to meet them too. I also wanted her to finally meet my family after nine years of friendship. I was intrigued and slightly shy to show Tamay where I came from too. I was embarrassed about my privilege, the amount of stuff I have, and throw away, on a daily basis and how my world is so removed from the traditional ancient, holistic and sustainable way. Tamay and I always talk about how we are doing this together, we are in it together and that means absolute transparency, we are both adult enough to chat about things that feel uncomfortable and it felt essential to build our long term trust. 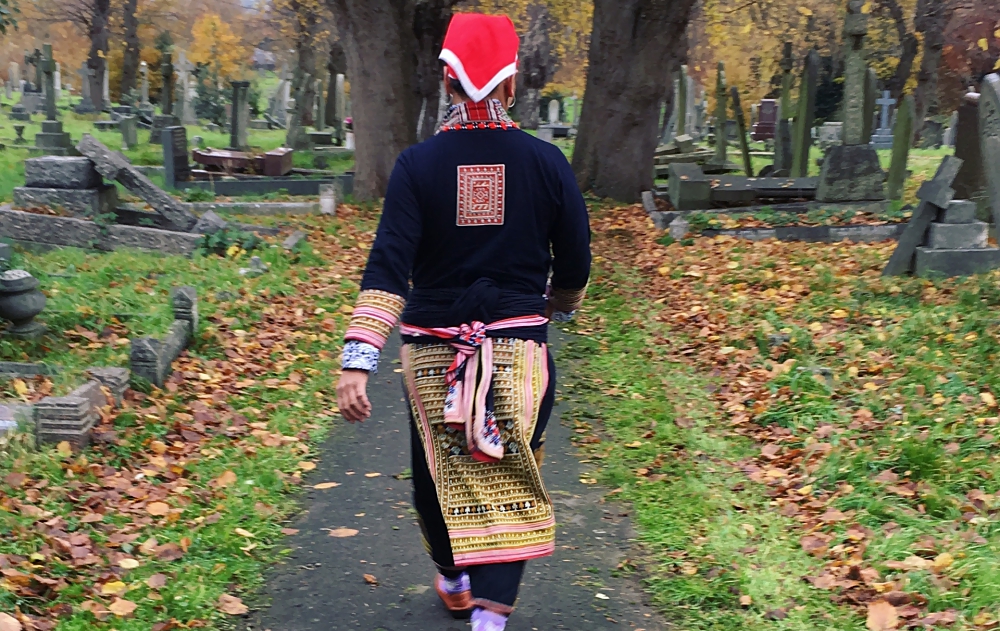 Both Tamay and I, deep down, are motivated by a cultural sense of desperation and urgency (dramatic, but true!) Mine, a desperate concern about sustainability and the lack of authenticity in a very complex Western society. And Tamay’s concerns about the future of her unique Dzao culture that is deeply connected with the slow process of textiles, which, worryingly, is not compatible with contemporary smart phone culture and fast-developing Vietnam. Even writing this now makes me realise why it was so important that she came! We both wanted the opportunity to share these deeper motivations and for our brand to be understood as more than just a clothing label.

On another level, I wanted Tamay to feel she had access to the Western world. I wanted her to be able to be a tourist. Knowing that it would be complicated to get Tamay a UK Visa, I went for it,  though I had no idea that it could be so much of a challenge. It was the moment when I really understood my own privilege in the world and it was really uncomfortable. Tamay’s life had to be put into a framework that would be understood by the British Embassy and this was really tricky– it simply doesn’t fit. If you're interested in hearing the whole story of the visa, you'll find it in this blog post.

In short, it was an extraordinarily stressful and expensive process which we had got so far into that there was no going back. We had two events booked in London, and also in Bristol. We were even speaking at an event about the future of hand-weaving at the Museum of Fashion and textiles in London.

Unbelievably, after a lot of emails, the second visa application was granted just a few days before her flight took off. The process of getting Tamay to the UK had become so complicated that I even doubted her arrival at Heathrow! The wait was watched by many instagram followers on a live feed. It was amazing to have so many people engaged in the story from all around the world, and this was just the beginning. Many had even helped during the visa process; I had at certain moments, reached out to the Tamay & Me community to ask for help and support and the response was phenomenal. I would highly recommend reaching out and asking for help when you need it. People like to be involved, it seems and this makes a community, not just an audience. 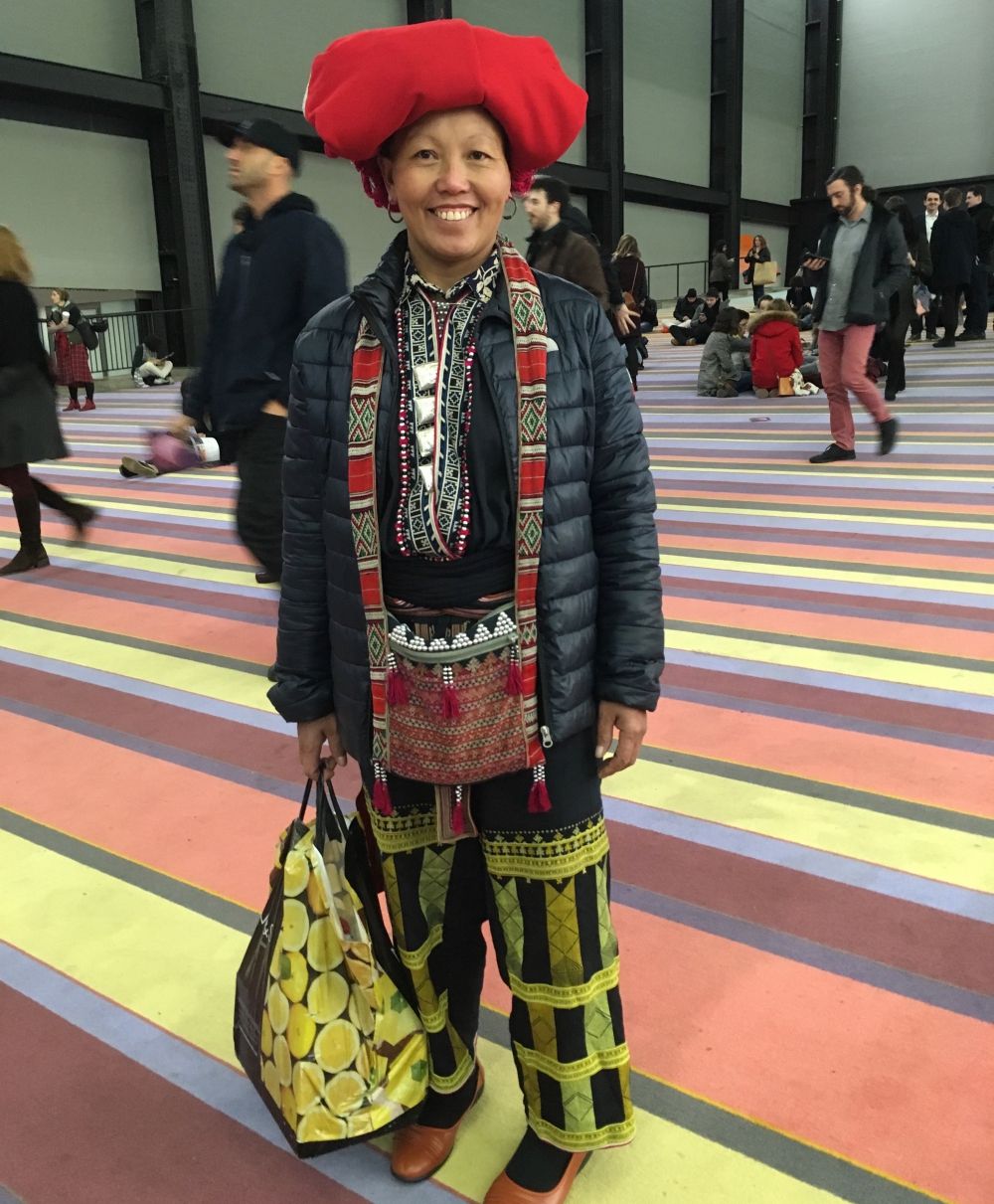 The events were magical, particularly our first talk in London. We didn’t really know how it was going to go. We had to be spontaneous. Tamay arrived in the UK and we were on stage, there was no time to rehearse. It became a conversation - people asked questions, we shared our story. Everyone asked more and more questions about textiles, clothing, money, growing rice and even shamanism. We went deep into why it was important for us all there in London to be connected to Tamay.  She was so cool, completely composed, her sense of self knowing and realness made all the potentially difficult subjects we talked about really light and accessible. It was a very special moment for everyone in the room. We were 40 people on a Sunday afternoon in a wholesale beer bar next to Maltby Street Market in Bermondsey. We all wanted to support her traditional way of life, her textiles, to understand them better and we all wanted her to teach us something about how to be in this very crazy world. By the end there were tears, we all cried, even Tamay which I have never seen before. We all felt connected, we were all on the same page, we all learnt lots. It was magical–the complexity of what Tamay & Me symbolised for both of us had been shared. What we had both been dreaming of became a reality. And there was an enormous sense of lightness that we had achieved something big.

The following week together, in Bristol, continued to be enormously successful. We hosted a beautiful evening event at The (instagram famous) Forge, we made lots of sales, we told a lot of stories and Tamay had a great time. We talked about food a lot! Tamay couldn’t believe how tall the buildings were in London, how much plastic there was on a very complicated sandwich array in an M&S service station. She was baffled by the amount of jars in our kitchen cupboards and the amount of clothes in the bedroom. She really enjoyed our organic kale and teaching us all to make fresh spring rolls. I loved watching her interact with a frozen chicken and a microwave, but most of all having her sense of calm to keep the madness fun. Our instagram followers were so engaged and supportive. For a week both Tamay and I felt like stars, perhaps because we were doing what we do with pride. Tamay was put on the platform of superstar-ness that she deserved. I was chuffed, she was chuffed.

There was something profoundly powerful about us being brave, being very transparent and really trusting. That if we are true to who we are and what we do, people will like it. Much more so than faking an aloof professional brand image, I wouldn’t know how on earth to begin doing this.

The events that followed were great too. Thanks to the big buzz of courage. Not only had I fallen back in love with my business, but we embraced what it is we offer, who we are and really put it out there, authentically, transparently and with trust.  That buzz didn’t wear off until way after Christmas. Tamay & Me had its best quarter by miles! HURRAY!