How to Use Storytelling Effectively

How storytelling can act as a tool for social change.

The Information Age has led to odd paradoxes. On the one hand, we have access to more information than ever in history. The Internet allows events taking place on the other side of the planet to enter our living room. Yet, the overflow of information is somehow making our life more disconnected from what happens in the outside world. The abstract and often pessimistic way in which global issues are depicted in the media generate confusion and feelings of helplessness.

Take for example climate change. We hear and read a lot about its facts and consequences, but did it lead more people to care for their own consumption and environment? The same goes for the so-called “refugee crisis” widely covered by the media in Europe: instead of improving citizens’ perception and facilitating refugees’ integration, the overflow of information may very well have contributed to increased fear and anxiety.

Storytelling for change
Storytelling can help address the disconnection between people and their environment. Stories create empathy. They allow people to intimately and emotionally understand the situation of a person living hundred miles away. Inspiring stories offer an alternative to mainstream narratives often focused on problems. They show that solutions exist.

In this short article I will share three key elements of effective storytelling, which can be used as a powerful tool for organisations committed to social change. 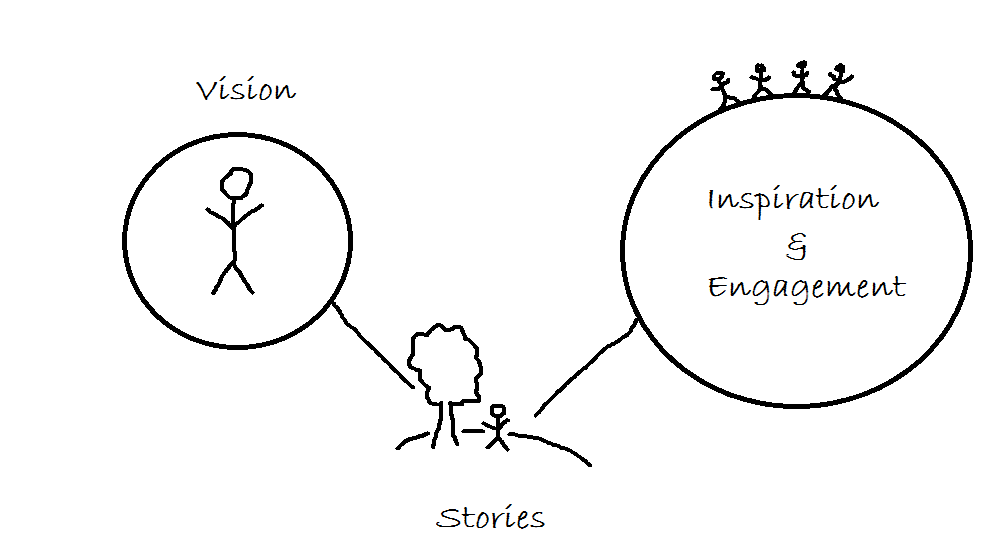 Most organisations committed to making the world a better place have a vision for the world, which they try to achieve through their work. Yet, many of them struggle to communicate that vision and mobilize people around it. This is true for social businesses, and even more so for international organisations such as the United Nations or the European Commission that face constant criticism for being opaque and disconnected from citizens.

In fact, people within the organisation itself have sometimes forgotten or are not very sure of what the vision is. This can easily happen when you are keeping yourself busy with daily work and lose sight of the broader purpose. In this case, creating a culture of storytelling within the organisation can help to re-connect employees around a common vision and keep in mind the end value of their work.

A strong vision internally is more easily shared with people outside of the organisation. Through successful stories, the organisation can show its direct impact on people and the environment and make its vision real and tangible for the audience.

" We all know the big problems our world faces – the real news lies in the solutions."

Storytelling brings vast topics like climate change and immigration down to their human dimensions. It shows the individual rather than the collective. It shares universal emotions instead of theoretical figures.

Twenty five centuries ago, in his treatise called Rethoric, Aristotle identified the “Pathos” as one of the three modes of persuasion by appealing to the audience’s sense of emotions. The two others, Ethos and Logos, appeal to the sense of authority and logic. A few centuries later, it seems like rationality has taken over the way most people think and communicate.

Stories bring emotions and empathy back in the picture. Behind the broad concept of climate change, stories reveal this persevering woman who installed solar panels in her village or that ingenious fisherman who found out a new sustainable way of fishing seafood.

To be effective, storytelling should talk to people’s heart, not only to their mind. As said by the American storyteller and political activist Maya Angelou, “people will always forget what you tell them, but they will never forget how you made them feel.”

Inspiring stories can convey emotions that move people to take action. Have you ever noticed that you felt more prompted to act when feeling angry or excited than sad or satisfied? Behavioural studies reveal that certain emotions are more likely to trigger action than others. In his book, Jonah Berger realised for example that after reading or watching stories that make you laugh or feel angry, you would feel the urge to do something rather than sitting still. The contrary applies to stories that make you feel sad or powerless.

The recent image of Aylan Kurdi, the young Syrian boy found without life on the beach after trying to reach European borders has raised ethical questions, but has certainly played a role in the massive rise in awareness and citizens’ initiatives to support refugees in Europe. Similarly, the impressive story of Malala Yousafzai turned global attention to the topic of women education in Pakistan. Within a few months, sixteen years’ old Malala was featured as one of the 100 most influential people in the world by Time magazine.

Effective storytelling may trigger all kind of engagement from the audience like funding, sharing the story, joining a community or other forms of active support.

Organisations working for social and sustainability objectives have the potential to change mainstream narratives on global issues. By showing their impact on the ground and sharing successful stories, they have the opportunity to inspire and engage more people in society around their vision.

To show how the world can be improved, one story at a time.

We all know the big problems our world faces – the real news lie in the solutions.

Maroussia Klep is the founder of Impact Storytelling, a storytelling consulting and video production agency that works with social businesses to show their impact and share their vision. Maroussia has a professional background in written journalism and international public policy. She worked as a reporter at the United Nations Headquarters in New York, and as policy analyst at the European Commission and OECD in Paris on environmental policy issues. At Impact Storytelling, she uses her experience to help you convey visions and messages for social change in a compelling way. She strongly believes in the power of stories to propel positive thinking and inspire people to take action.