How Much Do Governments Really Spend on Foreign Aid?

Studies find that Americans and Europeans significantly overestimate the money their governments spend on foreign aid.

Studies find that Americans and Europeans significantly overestimate the money their governments spend on foreign aid. Europeans are only slightly more realistic, but the result may also depend on how you ask the question.

More than 900 million people around the world still live in poverty and rich countries often pride themselves on providing financial assistance to them. But few people actually know how much rich countries give to poor countries.

Every year since 2009, the Kaiser Family foundation conducts a widely reported survey in the US on what people think their government is spending on foreign aid. The results are staggering: year after year, US taxpayers think that about one-fourth of the federal budget goes towards foreign aid - around $800 billion.

This is, of course, far from reality. Actual figures range more in the area of $30 billion, depending on what you count as economic aid. The Kaiser Foundation study made us curious: how would Europeans respond to the same question? So we asked.

" Americans and Europeans significantly overestimate the money their governments spend on foreign aid."

Europeans are only slightly more realistic than Americans

The reality first: the US and European countries spend much less than 1% of their budget on helping the poor in other countries (they are more in the area of 0.1% to 0.3%). 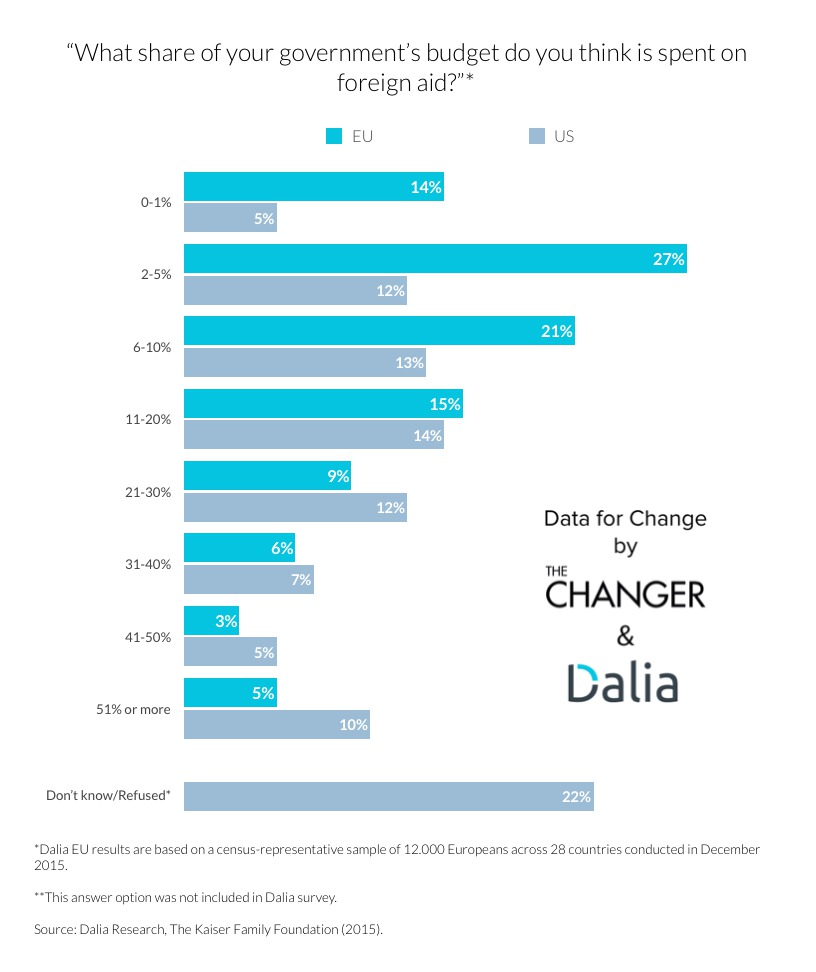 What do we learn from this?

So what does all this mean? Well, on the one hand, it shows that people in the world’s two richest regions don’t know very well where their tax-money goes. Most likely, this is not unique to foreign aid, but would also appear in other areas of public spending such as education, welfare or infrastructure.

It could also suggest that people might actually be willing to spend more on helping poor countries than their governments do.

The Kaiser Family Foundation asks about this, and finds that the majority of people think government spending on foreign aid is too high - which might not be surprising if you take into account that the same majority also thinks that it is one-quarter of the budget.

In Europe, only 36% think government spending on aid is too high (44% think it’s about right and 20% want spending to go up).

A word of caution

One caveat: the Kaiser Foundation study does not mention whether the question was asked in an open format (that is, “please tell us how much you think … “) or in a closed one (that is, “which of the following do you think …”).

This is unfortunate since the format can have an important effect on the result: if in a closed question, the true value lies at an extreme end of a spectrum, which in this case it does, people might be less likely to pick it as it “feels wrong”. As a result, the answers can be biased towards the “middle”, in this case somewhere between 10% and 20% of government spending.

Regardless, the results indicate a need for more awareness surrounding public-spending, particularly if better-informed citizens could result in pressure on governments to fund more meaningful programs.

This article was originally published on February 23rd, 2016.