Solidrinks has developed a transparent and sustainable donation system that supports refugee projects, while also promoting job-sharing and community inclusion.

Imagine this – you grab a cold mate beverage from the shop and by cracking it open, you are not only supporting a job-sharing position for an Afghani newcomer in Germany, but you are also campaiging for a society that embraces its diversity! This is Solidrinks.

Through their drinks, Solidrinks has developed a transparent and sustainable donation system aimed at supporting refugee projects, while also promoting job-sharing and the idea of an inclusive community. What is not to love?

Solidrinks
Solidrinks has developed a transparent and sustainable donation system aimed at supporting refugee projects, while also promoting job-sharing and the idea of an inclusive community. What is not to love?

In this interview, Solidrinks founder, Roberta Di Martino, reminds us that this is not about the “refugee crisis”, it's about us.

What was your motivation for founding SOLIDRINKS?

Before the SOLIDRINKS adventure started I worked in different cultural projects and as a stage designer. I loved my work but I constantly had to deal with poor working conditions, precariousness, and lack of free time. I didn't have any time and energy left to engage in voluntary work as I used to because I was completely buried in work from my jobs. That was the time when Hussein moved in to my flat share. He fled from Afghanistan when he was 11 and went through a 10 year odyssey: Iran, Turkey, Greece, France, and finally Berlin. Watching him struggle everyday with language and bureaucracy really affected my own life perspective. At one point I started asking myself: how can I raise awareness for this problem and how can we rethink the issue of migration and of shaping society together? I needed a shift in my life and I wanted a job that is worth working 40 hours a week. That is how the idea of Solidarity Drinks was born.

For every bottle purchased, 5 cents is donated to local refugee projects. Which projects do you currently support and how much have you contributed in total?

We currently support 4 projects: 1) bag Mohajer - bag for good, who design and create all kinds of bags out of old rubber dinghies and life jackets from the Mediterranean passage, 2) Champions ohne Grenzen e V. a soccer team and a 'family' away from home, 3) Kub - Kontakt- und Beratungsstelle für Geflüchtete und Migrant*innen e. V. offering psychosocial and legal support, language and bureaucracy mentoring for refugees, and 4) Women in Exile e V. who campaign against female discrimination in camps and society at large. We have raised 2000€ in the first four months and that number is rising. At the moment, we can barely cover the costs, but it was most important for us that from the very first bottle sold a fixed amount goes to the supported initiatives that defend the right to asylum and stand in for the social and economic participation of refugees. 5 cents might sound small, but it’s not if you consider how many people drink Mate in Berlin clubs. The idea is that we can increase the donations once we have reduced our manufacturing costs. Transparency is most important for us and we keep people updated about our costs and finances on our website. 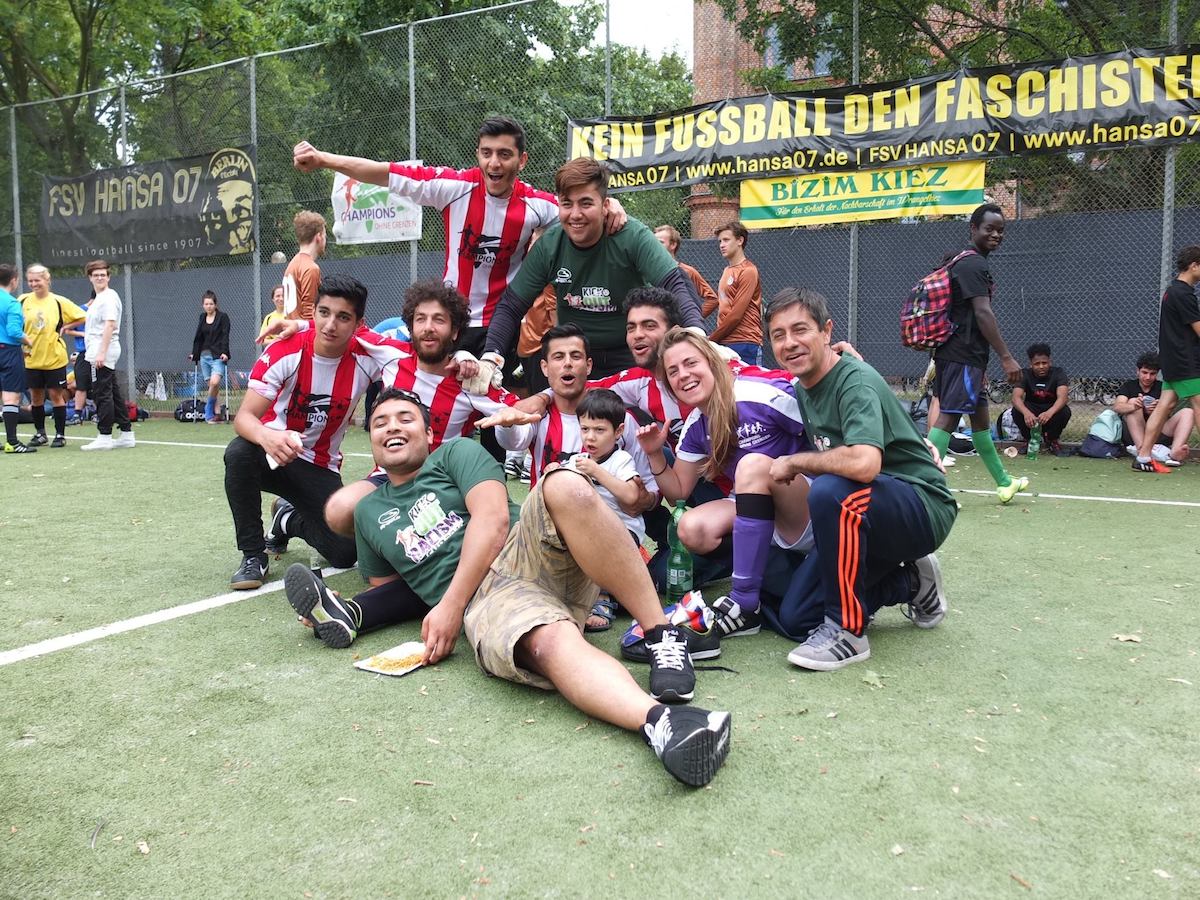 How do you select the projects that you work with?

We chose the first four projects from our personal networks. We've volunteered with some of them ourselves, or, in the case of Women in Exile, we chose out of immense respect for their strength and achievement. It is important for us to highlight the ongoing active contribution of refugees themselves and their initiatives – under very precarious conditions – to society at large. Their contributions have been going on for decades but often remains unrecognized. In the future, the Solidrinks association will be responsible for choosing new projects and initiatives, as well as working with them on ways to present their ideas and matters on the labels.

Tell us about your job-sharing model, how exactly does it work?

Our job sharing model is based on 2 main ideas: 1 + 1 = 2 and sharing is caring. The traditional way of working doesn't fit the current times anymore. In my previous working experience in Berlin as a migrant, I was often worried about my performance. Was I doing it right? Was it German enough? If I'm asking about this, do I sound unprofessional? Besides all this, how boring is it to work alone on something? Starting from this point, we reflected on an alternative working model for migrants and refugees to fulfill or follow up on their careers and skills in a more efficient and respectful way. For people forced to leave their home country, it's not just about learning a new language, but also becoming confident with the local working culture. At the moment, we have projects and activities in sales, PR and logistics that are shared between established locals and two newcomers who contribute different work experiences and perspectives. Verena and Manti, for instance, work together in field sales. They are basically responsible for this field of activity and organize their work together.

Our experience showed us that migrants find their way into the job, as well as society at large, more easily if they have a contact person they can work with and rely on. Depending on the personal background and education, a bit more coaching and tuning might be involved in the beginning. But after this phase, the tandem will turn into a profitable working and human relationship.

What’s been one of the greatest challenges in establishing SOLIDRINKS and how have you overcome it?

Beside the financial part, which is usually the main problem if you start a business without any investor behind you, one of the biggest challenges for me was the corporate identity development of Solidrinks. We didn't have the budget for a design agency. After some exchanges with professionals, I decided to go for the DIY option. I started to make collages, first for the bottles and then mockups for the website. My kitchen table was looking pretty much like the Bastelecke in the Kita! And then of course the challenge: How can we bring issues related to refugees, causing heated debates in public discourse, on a bottle? Should it be serious or ironic? Abstract or direct? For the first round of Solimate, we decided to work with short claims – solishouts that we composed together with the supported initiatives, like 'Kick out Racism' for Champions Ohne Grenzen.

You also use your packaging to get political. What’s the idea of solishout?

Solishouts are campaigning, calling for action, and maintaining a public presence all at once. We wanted to bring both content and transparency to everyday donating. The indispensable social work of refugees' initiatives in Berlin, Germany and beyond is often hardly known or linked. We wanted to establish a visible presence for current objectives in our diverse society. What is the sense of donating to some unknown project in some unknown place if I don't get engaged myself, especially if I could become active right here right now, next door? People actually want to get engaged and they want to learn. They look for ways to identify and solidarize with other likeminded people and objectives. This is what solishouts offer – a political “we” of an inclusive drinking community. 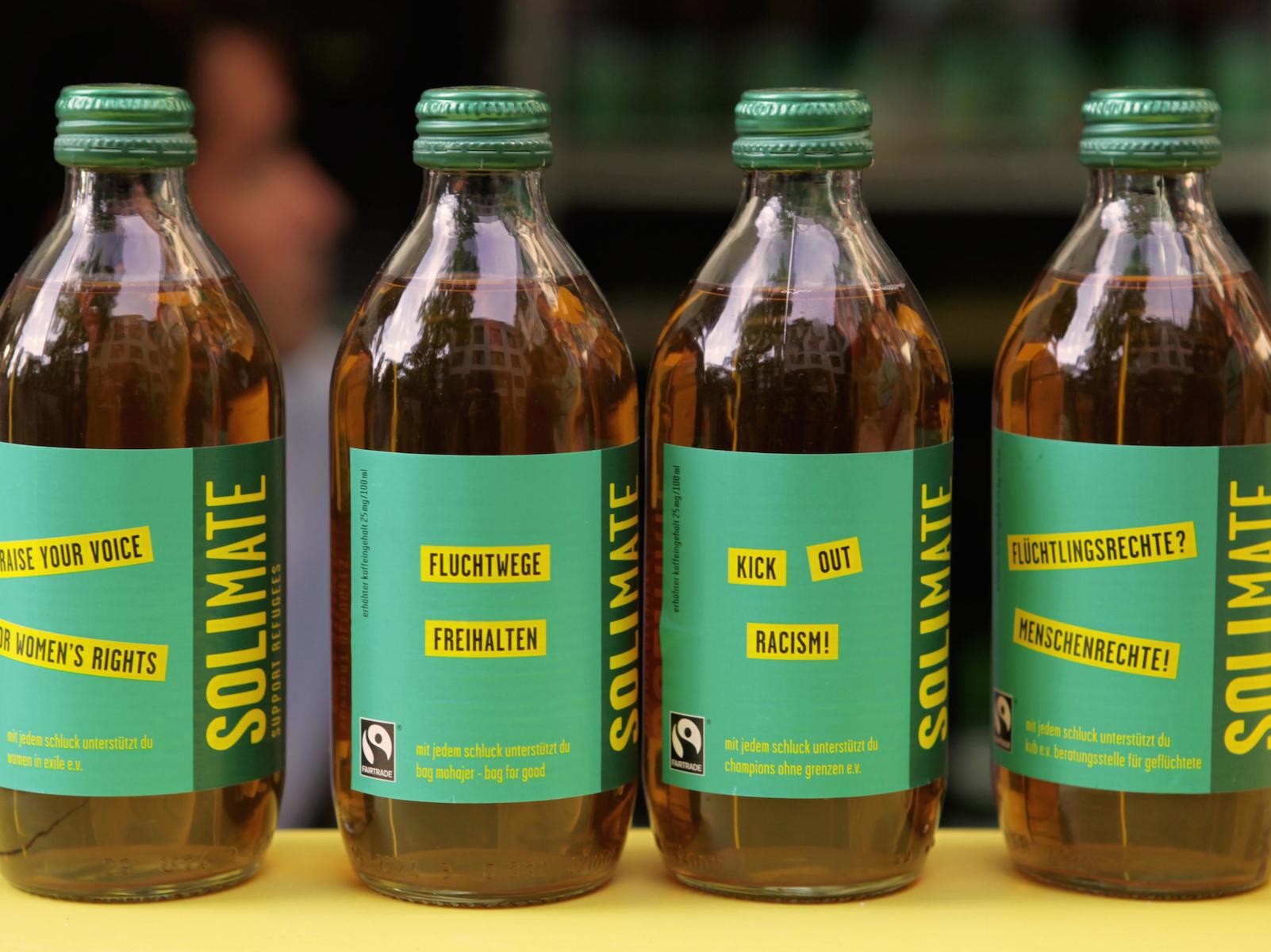 Right now you’re offering SOLIMATE, what other drinks are in the works? And in general, what’s next for SOLIDRINKS?

At the moment we are working on two more drinks. We’re experimenting with a range of exciting ingredients that our different team members have found throughout the world. As soon as the first super-mixture is ready we'll invite all of you to an evening of tasting and optimizing to Engels, Original Unverpackt, ZKU or any other Solimate-place. We're also brainstorming over a crowdfunding campaign.

Imagine this – by having a refreshing drink you are not only supporting a job-sharing position for an Afghani newcomer to Germany. You are also part of a campaign for a society that embraces its diversity! This is Solidrinks! Through our drinks, we bring these issues right into your conversation.

Drinking Solimate means contributing to a transparent and sustainable donation system aimed at supporting refugee projects and the idea of an inclusive community. Moreover, we promote and engage in conscious, fair and sustainable consumption.

But the real challenge goes far beyond the refugee issue. As one of our solishouts says, “Refugee rights are human rights.” This is all about how society will deal with the global migration issue which is not a new phenomenon, but a constantly shaping historical fact. So this is not about the “refugee crisis.” It's about us. And we're obliged to become an active part in this discussion. Solidrinks reminds you of this.