Tessa Cook, co-founder of OLIO, shares her inspiration and challenges as a social entrepreneur and discusses the future of food sharing.

Each year, 7 million tonnes of food and drink are wasted by households in the UK. If food waste were a country it would be the 3rd largest emitter of greenhouse gases. And, more than 50% of food waste takes place in our homes. These shocking statistics show that the familiar pang of guilt we feel when tipping some unused edibles into the bin is part of a much wider, and more serious, problem. It's this problem which OLIO is on a mission to solve. Their app is starting a food sharing revolution by connecting neighbours with each other and with local shops so surplus food and other items can be redistributed, not thrown away. We caught up with co-founder, Tessa Cook, to hear about their journey so far.

Tell us about OLIO - what was the catalyst for you and your co-founder, Saasha, to start the app? And what is your mission?

The proverbial ‘light bulb moment’ for OLIO came three years ago when I was moving country and found myself on moving day with some good food that we hadn’t managed to eat, but that I couldn’t bring myself to throw away. And so, with my newborn baby and toddler in tow, I set off on a bit of a wild goose chase to try and find someone to give it to, and I failed miserably.

Through the whole process it seemed to me crazy that I should have to throw this food away when there were surely plenty of people within hundreds of metres of me who would love it, the problem was they just didn’t know about it. And so the idea of OLIO, a mobile app where neighbours and local shops & cafes can share surplus food, came about. Most people I told the idea to thought I was crazy, but I shared it with my very good friend Saasha Celestial-One, and she immediately got it! As you can probably tell from her last name, her parents were hippies, and so like me, she was brought up with a keen appreciation of the value of food and the world's precious resources!

When we united to bring OLIO to life we were very clear that our mission was to “Unlock the value of food that is wasted in the home and local community” - where the value refers not only to the economic value, but also to the nutritional, social, environmental and moral value of food. It’s absolutely shocking that globally 1/3 of all the food we produce gets thrown away, whilst 800 million people go to bed hungry, and food waste is the 3rd largest source of global warming. And so we were motivated to try and solve this problem – especially given that in the developed world, over half of all food waste takes place in the home, with the average UK family throwing away £700 of food each year! 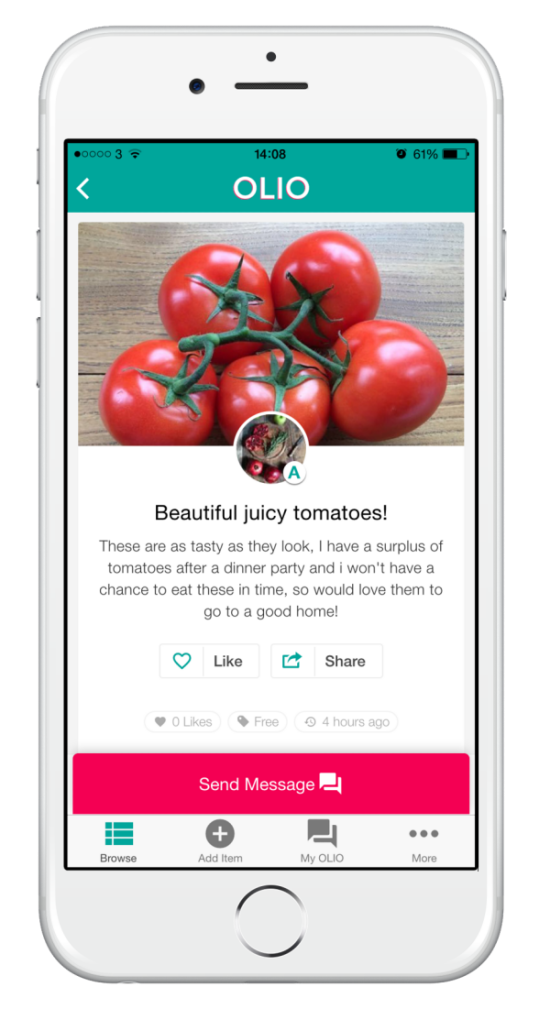 It seems that for you both, your upbringing has greatly influenced your work today. Can you tell us a little about your childhoods and how they came to shape the creation of OLIO?

I’m a farmer’s daughter from North Yorkshire and so had a childhood that involved LOTS of hard work, and when you realise how much hard work goes into producing the food we all eat, you would never dream of throwing it away. As a result of that upbringing I really, really, really hate food waste! And Saasha had a similarly unconventional upbringing - being the daughter of Iowa hippies, she spent her childhood salvaging and re-selling household items that others had discarded, and so also hates the idea of anything being wasted – which makes us perfect partners for OLIO.

What skills have you found to be the most important for growing the company? And what have been some of the biggest challenges you’ve faced?

There are several skills that are really important. One of the first is being prepared to ‘do things that don’t scale’. And so Saasha and I spent the summer of 2015 pounding the streets of North London, signing up people to be the first to know when we launched OLIO, and handing out flyers and letters to explain the app and our mission. Another important skill is to be constantly testing and experimenting, because in the early days of a startup your key objective is to LEARN! As a result of lots of failed experiments, another extremely important skill is resilience. You need resilience to keep you going through the dark days – of which there will be many; and that is why having a very clear mission to motivate you is extremely important too.

With regards to challenges, one of the biggest is how to grow the user base with a marketing budget of close to zero – that’s where our Ambassador programme of volunteers spreading the word about OLIO in their local community, comes into play. At the moment we’re averaging approximately 20,000 new users joining us every month, so it’s working well! 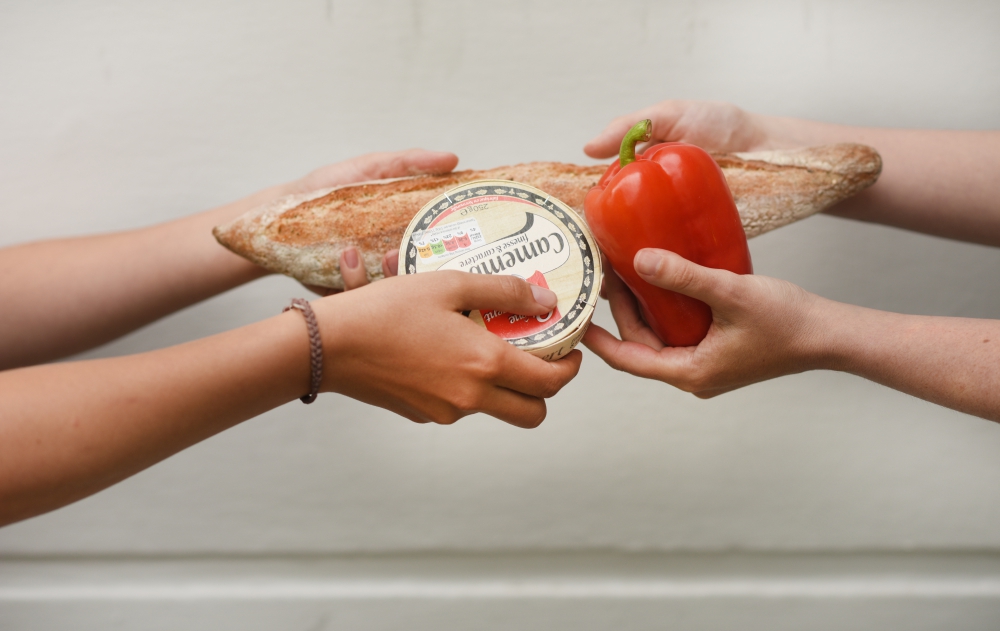 We love how OLIO not only tackles food waste but also helps to build a sense of community among neighbours, especially in cities where our lives can so easily become very insular. Was this something you aimed for from early on or just a lucky by-product of reducing food waste?

I think it’s fair to say that both Saasha and I under-estimated – or didn’t fully appreciate – the role that community would play with OLIO when we first launched it. However, very quickly, our users told us just how much they loved meeting other users in the same neighbourhood, and that has been consistent feedback ever since!

Where do you fit in to the landscape of organisations working to combat food waste in the UK and elsewhere? Who else should we look out for?

There won’t be one single solution to the problem of food waste – it will be a mosaic of solutions, of which OLIO is one. There are charities such as Fareshare, Foodcycle, City Harvest, the Felix Project and Plan Z Heroes who are all doing a great job helping redistribute unsold food from retailers and manufacturers to charities and vulnerable people. There is Takestock.com who provide a B2B marketplace for surplus food, which is about redistributing larger quantities of food higher up the supply chain.

And then there are apps such as Too Good To Go and Karma that enable restaurants and delis to sell food at the end of the day at steeply discounted prices. There are also brands such as Rubies in the Rubble, Snact and ChicP who are producing delicious food out of wonky fruit and veg, and OddBox who provide a wonky produce subscription service. Finally there are organisations such as Feedback, Hubbub and This Is Rubbish who do amazing campaigning and policy work. All these organisations and more are playing an invaluable role in the fight against food waste! 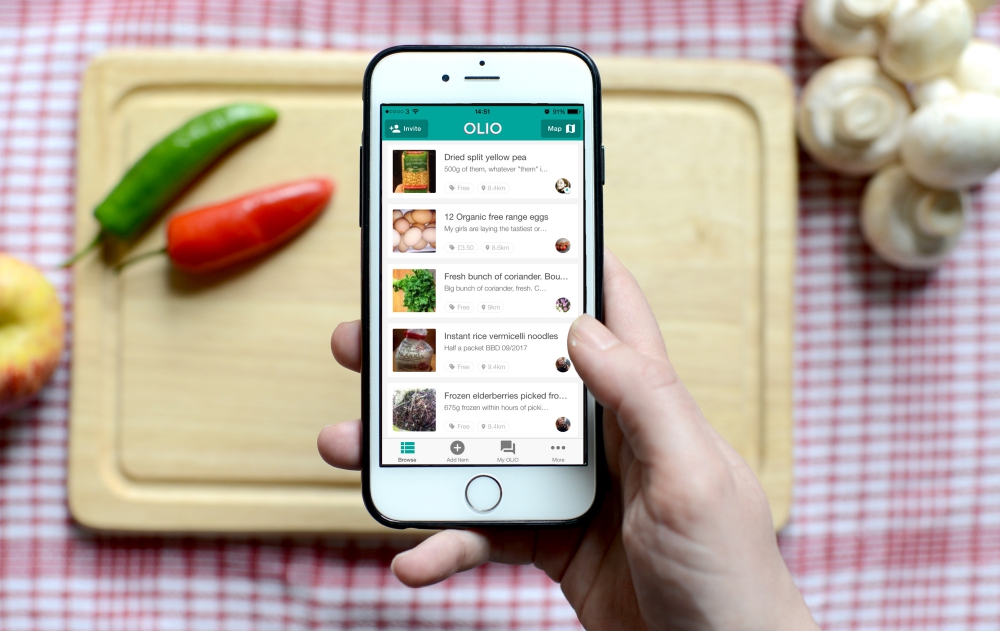 What’s in store for the future of OLIO? What would long-term success look like?

In the next couple of weeks we’ll be adding a new section to the app that will enable our users to share tips, tricks, recipes and stories that all relate to food and sustainable living. And we’re also planning to get much better at providing a more customised experience of the app, as we’ve discovered that we have very distinctive user groups e.g. some people only ever add, whilst some people only ever pick up. Looking at the bigger picture however, our ambition for OLIO is an unashamedly bold one – it’s of growing from 400,000 users, to 400 million users, who are all sharing instead of binning our most precious resource!

How can people get involved or support your work?

We would love for as many people as possible to get involved! We have a thriving community of 18,000 and counting volunteers, so please do check out the volunteering section on our web site HERE or email us on hello@olioex.com. In particular we’re always looking for ‘Ambassadors’ to spread the word in their local community and ‘Food Waste Heroes’ to collect and redistribute unsold food from local stores.