The Economics of Happiness

Happiness is subjective, but what if we could measure happiness objectively?

So you want to be happy and lead a good life? It's almost a rhetorical question. According to Aristoteles, happiness is the supreme good for wo(men) – at least its pursuit is one of the great goals one wants to achieve in life.

For many years, it was mainly philosophers who talked about the pursuit of happiness. Only recently, economists discovered the field of happiness research which was termed "the economics of happiness". As it turns out, there are things more important than money.

So how do they measure something as subjective as happiness and what does it mean for our individual pursuit of happiness? Let me give you some answers.

Why should we measure happiness?

There are two main reasons why it is important to start measuring happiness both on macro and micro levels. In 1974 the economist Richard Easterlin found that in industrialised economies, such as the United States, economic growth did not lead to higher life satisfaction over time even though income was positively correlated with life satisfaction at a given point. His revelation became known as the Easterlin Paradox, which inferred that economies that pass a critical income level of 10.000 US Dollar per capita could no further increase happiness levels through income growth. Thus, other economists such as Frey and Stutzer reasoned that there must be other values that could not be measured in monetary terms which influence our happiness level.

This in turn gave rise to the other main reason: GDP on its own cannot be used as a holistic measure of a population’s welfare anymore. Critics argue that it actually includes values that harm people’s well-being such as environmental exploitation and that it leaves out considerable values that cannot be accounted for. The later include childcare or the reduction of working hours in favour of more leisure time. The measurement of happiness can, therefore, act as an alternative prosperity indicator.

How can we measure happiness?

The question we need to ask then is how can we reasonably measure happiness? In order to measure the construct, it first has to be defined which is not an easy task. However, researchers have used measures of people’s subjective well-being (SWB) to capture their individual perspective. SWB can be separated into an affective and cognitive component. The latter is of greater importance to economists as it accounts for what people think about their life overall, whereas the affective part concentrates on one’s emotional feelings at the moment. There are various methods for capturing SWB, however, the easiest and most commonly used are large-scale surveys, for example the General Social Survey or the Eurobarometer Survey. In these surveys people are directly asked about their cognitive SWB through questions such as: “Taken all together, how would you say things are these days – would you say that you are very happy, pretty happy, or not too happy?” In 2013 the OECD published guidelines on measuring SWB in order to promote a common standard, trying to tackle the problem of survey differentiations and to ensure validity and reliability.

What are some challenges with respect to the measurement?

Even though happiness measures could be well-suited supplements to GDP, there are still various challenges that need to be considered. Because of the different methods and data used, the results of happiness studies often vary considerably.

The relationship between income and happiness is still unclear, as critics of Easterlin have tried to disprove his hypothesis based on different data (time series vs. cross-sectional data). Thus, it might be difficult to use the results for decision making. Another challenging point is that psychologists have developed a set-point theory of happiness which states that people’s happiness level stick to an inherent set-point. This is related to the principle of a hedonic treadmill that describes the tendency of humans to return to a relatively stable level of happiness after occurred positive or negative life events. Yet, studies have shown that adaptation sometimes takes several years and for example in case of a serious illness could even last for a lifetime. Another challenge concerning happiness indicators is the lack of international comparability. As happiness is subjective and often relative, people in different parts of the world could have the same happiness scores, even though objective measures clearly state the opposite. Therefore, studies need to pay regard to cultural biases and results should always be compared to other objective measures such as life expectancy or per capita income.

But what can we learn from this?

First of all, there are more important things than money. Who would have guessed that? Well, at least now we know that a higher paid job won’t make us any happier in the long-run. Therefore, we should look out for an occupation that satisfies our inner needs. Moreover, we should use our time more wisely in spending it with family and friends and things that we truly love.

The economics of happiness has shed light on the importance of including immaterial values into our measurement systems in order to fully capture the welfare of nations. In times of low GDP growth – which has become normal in most industrialised economies – it is essential to point out that massive growth is not necessary for a population to be satisfied with their lives.

As an entrepreneurs or business leader you should include happiness as a primary goal of your business. Not only from an ethical point of view but also in terms of your business results as studies have shown that happy workers are more productive. Employees who are satisfied with their job are more likely to put more effort into the work they do and show a much higher amount of loyalty to their company.

Nevertheless, happiness is and always will be subjective. This is why self-reflection is key for understanding your own conception of a happy life.

What makes your heart sing? Which activities do you enjoy most?

Often this is not what society tells you. Make a list of things that make you happy and dedicate more time to them. It is often as easy as this to change our lives’ perspective to a brighter side. 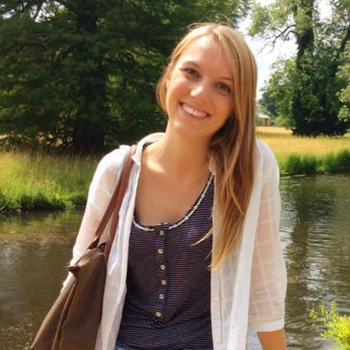 Natalie Frey just completed her bachelor’s double degree in International Management at Reutlingen University and Dublin City University. She is interested in topics related to happiness, the future of work, social entrepreneurship, women empowerment and intercultural management. What happiness means to her: enjoying a good laugh with friends, singing and playing the guitar, having a cup of coffee in a nice café and her vision of making the world a better place.

This article was written based on her bachelor thesis – if you are interested in further reading, please feel free to contact her via email: natalie-frey@web.de