6% of Europeans Identify as LGBT

The size of Europe's LGBT community has been notoriously difficult to measure. A new study aims to change that.

This article was contributed by Dalia Research and originally appeared here.

As Europe rightfully moves towards expanding the rights of the lesbian, gay, bisexual and transgender (LGBT) community, many wonder how large the community is and how many people these policies will impact.

Unfortunately, the size of the LGBT community has been notoriously difficult to measure. Most country censuses don’t ask sexual orientation questions, and the surveys that do attempt to accurately quantify the LGBT population can be stymied by the personal nature of the topic. Even when surveys do collect information about LGBT demographics in a certain region or country, it is difficult to compare the results because responses are very sensitive to how the questions are phrased and what answer options are offered.

In our latest survey, we wanted to address these issues and ask our EU respondents how they categorize themselves sexually. Because our methodology leverages technology to conduct surveys anonymously through web-enabled devices, respondents are more likely to answer honestly than in face-to-face or phone interviews. Unlike most other surveys that try to compare LGBT demographics between different countries, our surveys are based on a consistent set of questions and methodologies and are therefore easily comparable across countries.

*(The categories are loosely based on the Kinsey scale, developed by Alfred Kinsey in the 1940s, that measures the spectrum of human sexuality.)

The results show that 5.9% of Europeans identify as LGBT when asked directly - ranging from 7.4% in Germany to 1.5% in Hungary. However, when we give respondents the opportunity to select a sexual orientation somewhere on the Kinsey scale, we found that the share of people who identify as not only heterosexual is nearly twice as high (10%) as the percent who identify as LGBT from the yes/no question (5.9%).

Note: some people chose to not respond to the questions, but the percentages reported in this post do not ignore this share of the population in their calculations. 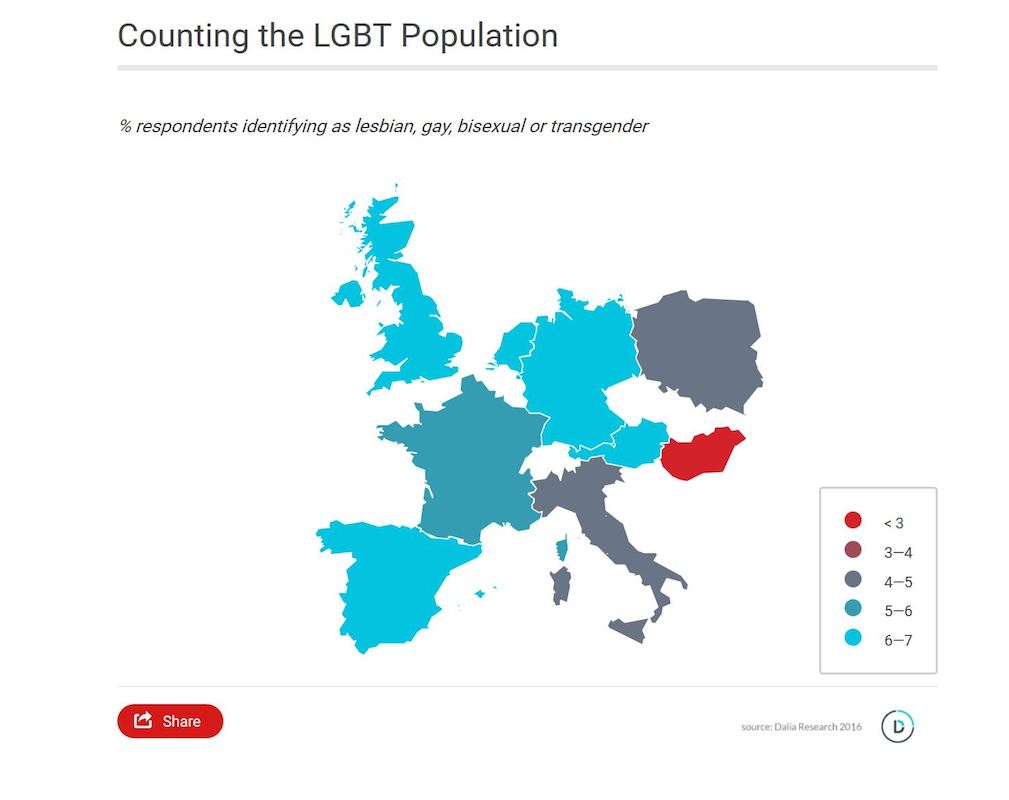 Our results show that in general female respondents are more likely to identify as LGBT than men. Though the overall gender gap is small (~1%), it varies significantly by country: while the same percent of both men and women in the UK identify as LGBT (6%), only 2.5% of Dutch men identify as LGBT compared to more than 10% of Dutch women. 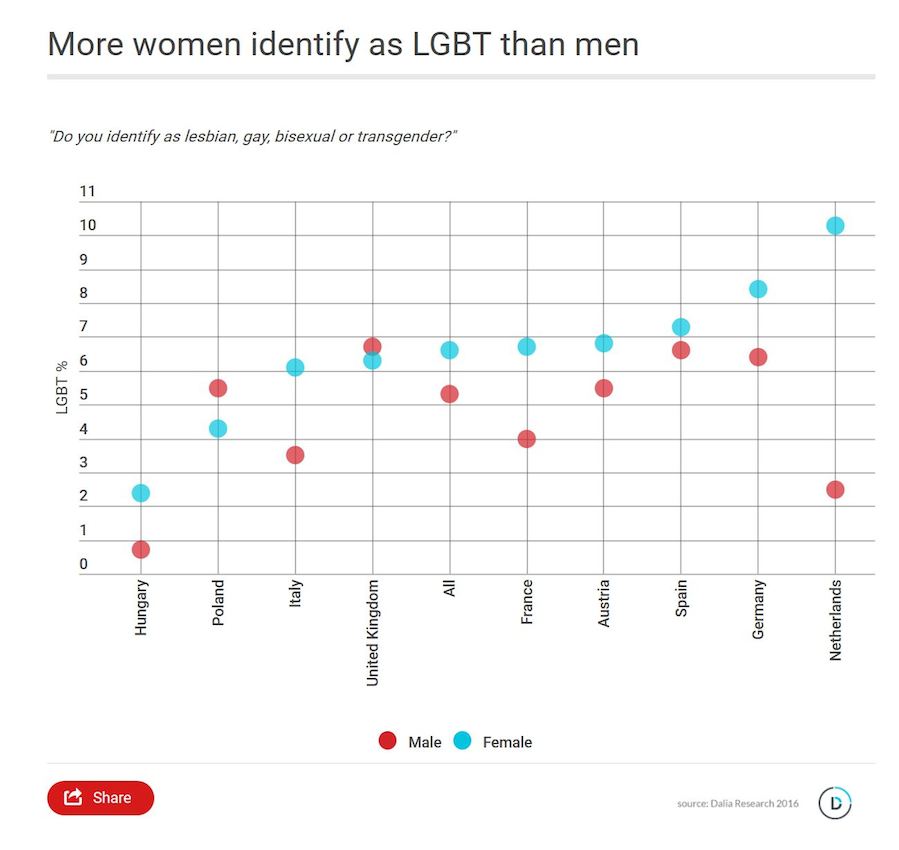 Due to the growing awareness of the concept of sexuality as a spectrum and more liberal attitudes towards sexuality among younger generations, we wanted to see if there were age differences in reported sexual orientation. Our results show that young people are more likely to describe their sexual orientation as something other than only heterosexual: 16% of Europeans between the ages of 14 and 29, compared to 7.5% between 30 and 65. Comparing the LGBT age difference between European countries, we find that the generational divide is particularly wide in Spain, where as many as 14% of those between 14-29 years old identify as LGBT, compared to 1.8% between 50-65. 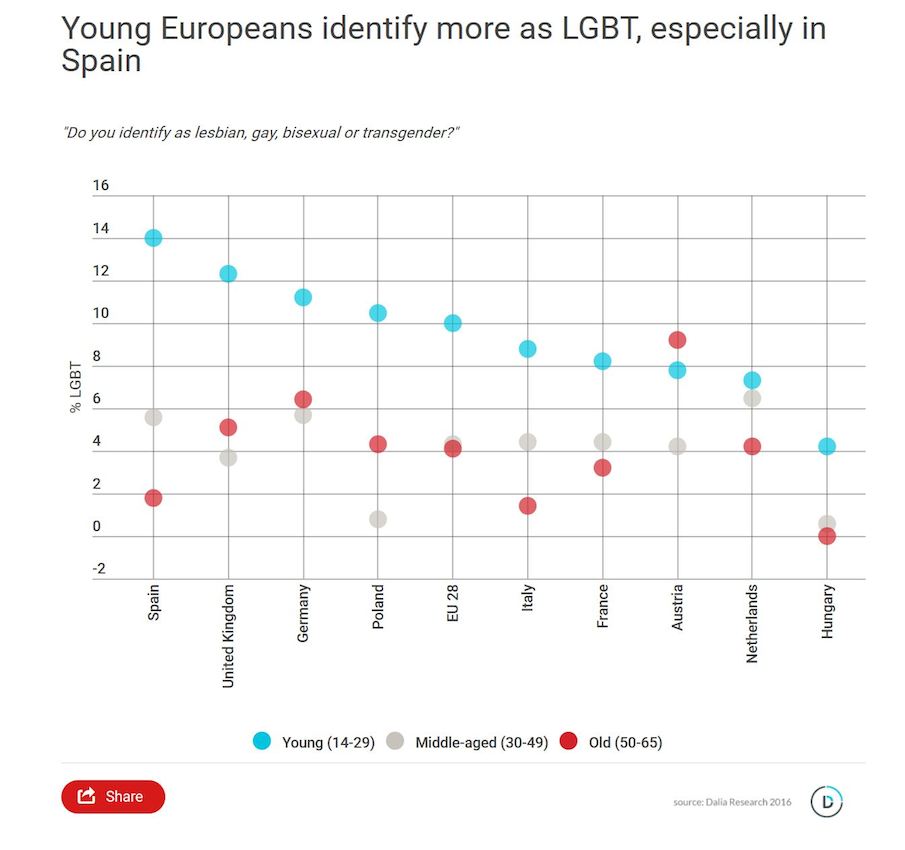 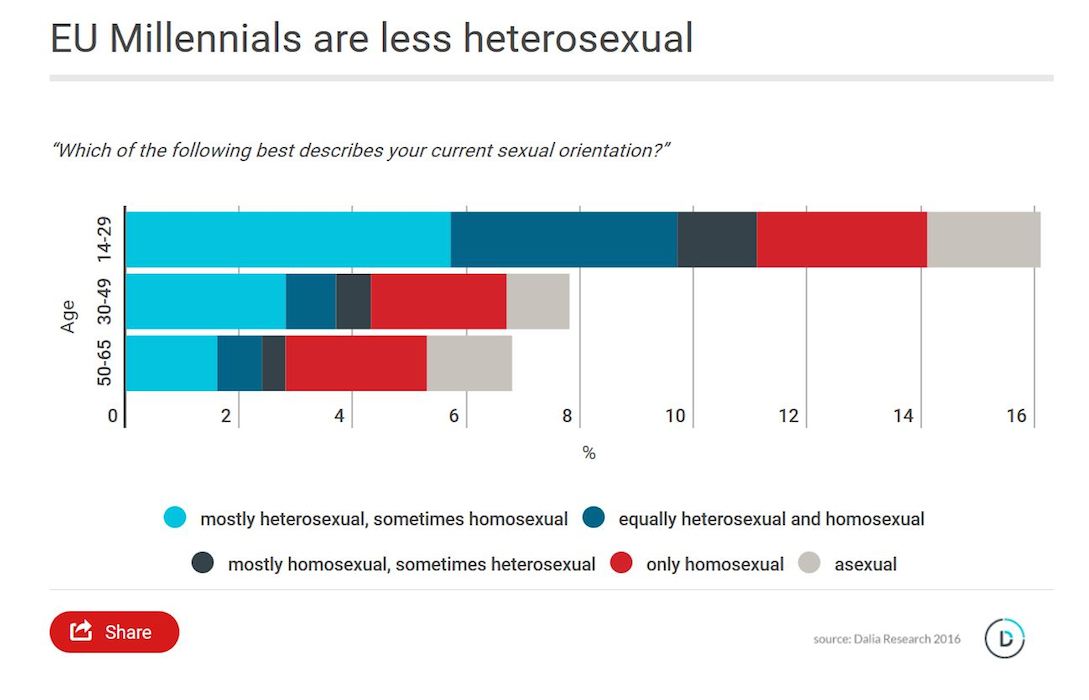 Limitations of the results

Sexual identity is a personal topic. Estimates vary depending on how the question is phrased and how people are asked. Furthermore there remains a high degree of uncertainty, as 8% of people have preferred not to answer whether they identify as LGBT, and 12% how they would describe their sexual orientation, which Quartz also points out as a limitation of survey research. Though our estimates are far from definitive, our Europe-wide survey is among the few, if not the only one, that allows for a comparison across European countries and offers a degree of anonymity to encourage honest answers, and get a better count. This could explain the substantial size difference between our survey results and others that tend to report a range of 1-2%, like Britain’s Office for National Statistics report in 2015.

Though imperfect, our LGBT population count is an important step forward for a minority often unrepresented in census data. As Dr. Gary Gates, demographer who specializes in LGBT data said, “There’s a saying: ‘You don’t count in policy circles until someone counts you.’”