Deconstructing Racism One Statue at a Time

Rich, white and male. European cities are peppered with statues, and you’ll find that the overwhelming majority of these have a few things in common.

Statues of people have much longer life expectancies than people themselves. Bronze and marble outlast flesh and bone, and they stand upright to remind the living of the fallen. European cities are peppered with statues, and you’ll find that the overwhelming majority of these have a few things in common. I don’t mean to sound like a stereotypical, angry feminist but they really are nine out of ten, statues of men, usually white men, usually rich, white, men, usually extremely rich, white, men with titles - either from the military or the monarchy.

Although oftentimes pigeons serve up some poetic justice and coat said statues in a spectacular mess of multicoloured droppings, they still stand there tall, proud, their dominance only slightly undercut by bird shit. This is the legacy of the West.

Power was and to a great extent still is, in the hands of old, rich, white men (who crap on everyone below them, for further clarification see two variations of famous internet meme below, continuing the ornithological theme). 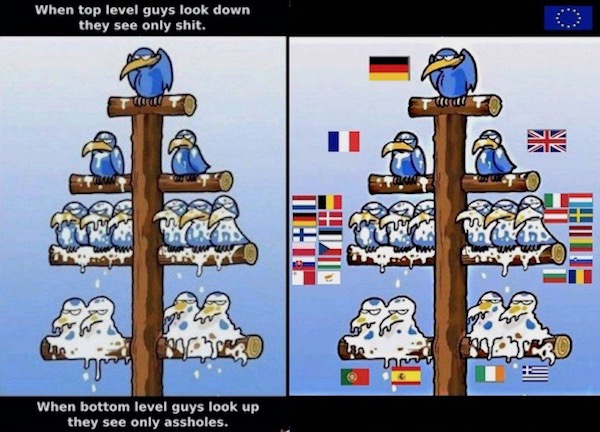 Barcelona, much like London, Paris or New York, was built on the backs of slaves and migrants and the exploited poor, who worked and died behind the scenes, and of course there are no statues erected in their honour. However, businessman and slave trader of the early 19th century, Antonio López y López, has been standing since 1884 in the square that bears his name. In fact, the monument was demolished in 1936 at the start of the Spanish Civil War only to be rebuilt in 1944. Antonio López made his fortune by trafficking people from the African coast to Cuba. Trafficking of slaves was illegal after 1820 so he made a pretty penny, eventually helping found the Banco Hispano-Colonial and the Compañía Transatlántica ocean line. This of course earned him the title of Marquis. Slavery, banking, shipping, and monarchy’s approval - a lovely age-old partnership that stood embodied in this monument for almost 150 years, until now that is.

Charles Dickens writes, “crush humanity out of shape once more, under similar hammers, and it will twist itself into the same tortured forms. Sow the same seeds of rapacious license and oppression over again, and it will surely yield the same fruit.” If we keep celebrating the oppressions of the past, or even decorate our present with those same stories, we shall see more of them in the future - you reap what you sow.

There has been a long-standing demand from citizen movements to remove the statue of Antonio López. These demands finally saw the light of day. The activist art collective Metromuster, with support from social-movement-backing Guerrilla Foundation, has achieved, along with partners such as SOS Racismo, the official removal of Antonio Lopez - for good. However, the work doesn’t end here, there is now a participatory process to rename the square underway to rename the square. The current frontrunner is Idrissa Diallo. A young man who died in a migrant detention camp in 2012, aged 21, while awaiting deportation to Guinea and whose death sparked national debate about both the existence of and conditions, in detention camps across Spain. This is the legacy of the present and these are the stories that need to be heard and these are the new judgments we must face. Moreover, the fact that there is now a participatory process in place, that people can choose what names their streets and squares will carry and what stories these names shall tell is a hallmark of inclusive mindsets. 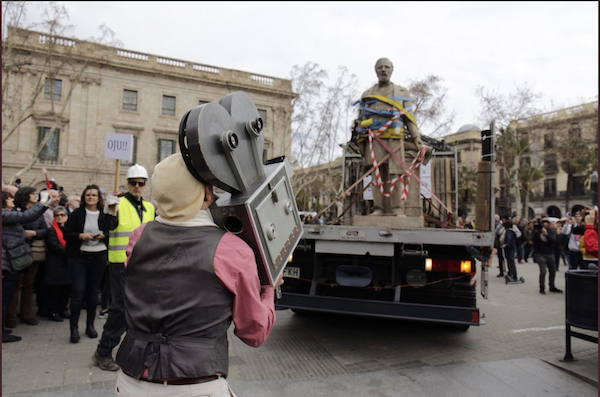 The day of Antonio’s demise, was couple with a celebration, carriages, clowns, stilt walkers, which carried the spirit of play, of joy, of fiesta. But saying bye-bye to Mr. Slave owner does not mean forgetting the past. The removal was coupled with the inauguration of two information plaques, one detailing the history of the square, ensuring that future generations know the past and why an informed decision was made to alter the present (it also brings me great joy to see the latest sentence summarizing all this on Antonio’s Wikipedia page). The other plaque described the bullangues, which were popular uprisings that played a crucial role in ending the absolutism of the 19th century. The bullangues were working class city uprisings that took place between 1835 and 1843 as people demanded democratic reform and political participation. Tired citizens protested over the poor social conditions and political marginalisation they suffered, and were particularly directed at those considered responsible for inequality and poverty. A 19th century Occupy if you will.

The story doesn’t end here however, there’s still much work to be done. A group of city council members in Barcelona also want to take down the famous statue of Christopher Columbus in the town center, arguing that it inappropriately celebrates the explorer’s colonial history. This will be a harder sell because the image of Columbus is a tourism commodity as well as a point of national pride, but the fight against Columbus is a fight against Imperialism. If we go a wee bit academic for a second, Imperialism is the creation and maintenance of unequal relationships between civilizations, favoring the more powerful civilization. Thus, cultural imperialism is the practice of promoting and imposing a culture, usually that of a politically powerful nation, over a less powerful society. In other words, the cultural hegemony of industrialized or economically influential countries will determine general cultural values and standardize civilizations throughout the world. In other, other words, rich big shot countries hold all the cards and do whatever they like to customs and cultures of shithole countries (to use the currently established presidential term). 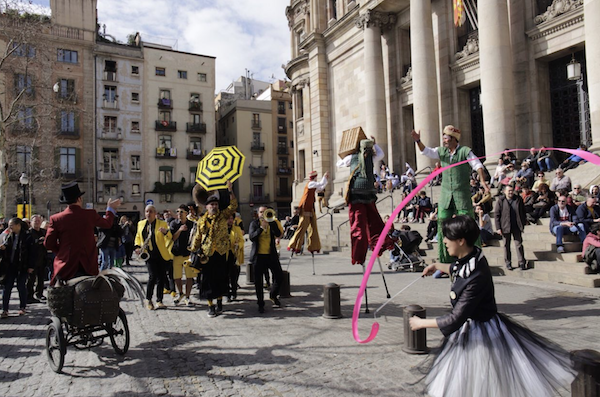 What’s in a Name?

The Spanish Civil War, like every war, and every civil war in particular, didn’t really have any victors. All that remained were broken, wounded people with a lot of grief. So in order to avoid dealing with the legacy of Francoism after the 1975 death of General Francisco Franco, the Pact of Forgetting was invented. It was an attempt by the citizens of Spain to put the past behind them and concentrate on the future of Spain, and even though at first glance it may seem absurd, people agreed to forget. In practice, this meant suppressing painful memories that would have remained raw should the population have been divided into 'victors' and 'vanquished' after the war. While many historians accept that the pact served a purpose at the time of transition, there is more controversy as to whether it should still be adhered to. Historian Paul Preston takes the view that Franco had time to impose his own version of history, which still prevents contemporary Spain from "looking upon its recent violent past in an open and honest way”.

A heartbreaking new documentary, The Silence of Others, by Almudena Carracedo & Robert Bahar, details this current limbo that Spain finds itself in, trapped between an unresolved past and an unresolvable future, at least until the ghosts of the past have been confronted. There is a moment in the film where a street gets rebaptised, shedding the name from its violent Francoist past, and the impact this has on the living survivors of that violence, is tangible, touching and far from merely symbolic. 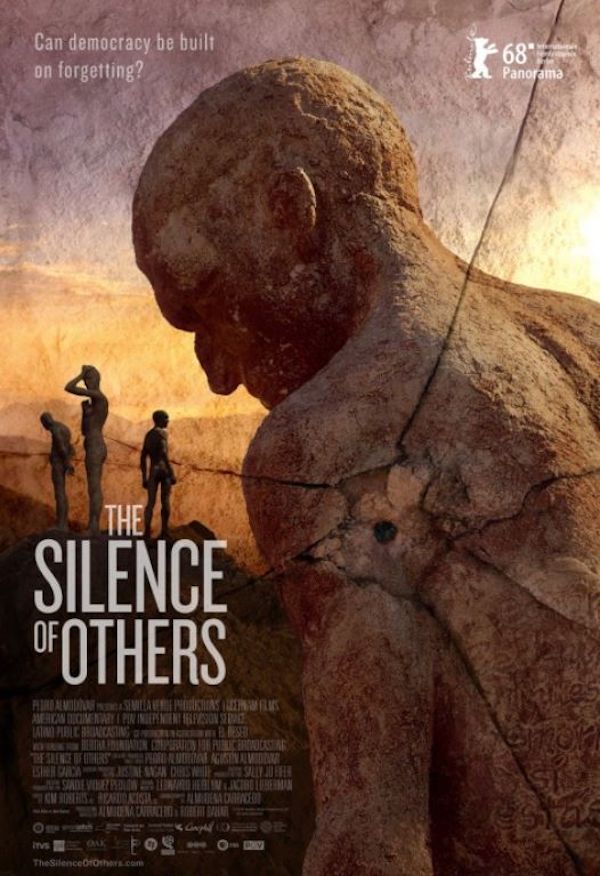 Spain is just one of many countries that carries such open wounds. I remember during my high school years, studying ‘Translations’ a play by Brian Friel, where places in colonized Ireland, are being renamed from Gaelic into English by the angloppressors. A character says “...that it is not the literal past, the 'facts' of history, that shape us, but images of the past embodied in language.” So yes, words matter. The names of things that surround us matter. At a later point the character asks us to remember “that words are signals, counters. They are not immortal. It can happen that a civilisation can be imprisoned in a linguistic contour which no longer matches the landscape of... fact.” It is the same questions asked by the activists that pushed for Antonio Lopez’s removal, does a slave trader’s presence in our square match our current reality?

What’s in a Place?

Some white guy once said that ‘we shape our buildings, thereafter they shape us’, and some other white guy said that ‘architecture is inhabited sculpture’ and they were both right. Our urban landscapes are expressions of our souls. We prioritise efficiency, our cities become densely packed, vertical jungles, we prioritise light, we start using more glass, we prioritise green spaces, we do not cut down all the trees and cement the grass.

Now if I was an urban planner, topiaries a la Edward Scissorhands would be the sculptural benchmark. However, I also believe in the participatory process, that people should be allowed an opinion about their habitats, that is should not be force fed to them by those who decide on such matters. So no matter how much I want to live in a giant garden of Tim Burton’s design, this might not be everyone’s cup of tea.

In the beautiful book, ‘Wind, Sand and Stars' Antoine de Saint Exupéry frames human accountability in this poignant way: ‘to be a man is to be responsible: to be ashamed of miseries you did not cause; to be proud of your comrades' victories; to be aware, when setting one stone, that you are building a world’. We are also culpable for crimes we did not commit, and not in the idle-bystander kind of way, no, in the sense that crimes have been committed, I recognize them as loathsome, and I still do nothing to prevent similar crimes from being made again. 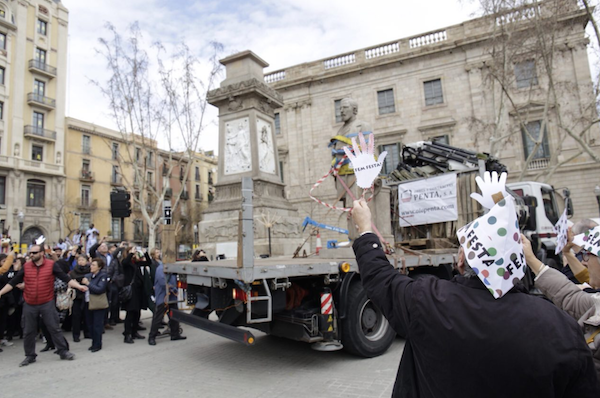