Social media for non-profits in the age of digital activism.

Kathrin Jansen is a Senior Communications Manager at Future 500, a global nonprofit specializing in stakeholder engagement and building bridges between parties at odds—often corporations and NGOs, the political right and left, and others—to advance systemic solutions to urgent sustainability challenges. A native German, she currently resides in California. Having worked in both the American and German context, she's put together some of her learnings and observations surrounding the subject of how nonprofits use social media in light of the current digital activism trend.

Social Media and Digital Activism are changing the way we interact with almost everything, from social and political issues to climate change. Traditional media and news are taking a backseat when it comes to gathering information; we increasingly rely on our own social networks and social media for the latest updates. Google and Facebook algorithms determine what we see based on our own and our network’s aggregated searches and preferences. The Facebook algorithm includes factors such as how often we interacted with a friend, page or public figure, how many likes, shares and comments a post has received, and how much we have interacted with that kind of post in the past.

At a recent Future 500 event, a corporate executive asked attendees: ‘But what is a “like” really worth?’ According to a recent study by Cone Communications, it’s worth a lot. It was found that nearly 64% of Americans say they are more inclined to support social and environmental issues in a variety of ways - including volunteering, donating and sharing information - after first “liking” or “following” an organization online. The majority of Millennials use social media to interact and discuss issues they care about and 58% of Americans feel “tweeting” or posting information about a social or environmental initiative is an effective form of advocacy.

Americans are getting more comfortable using social media to voice their support or disapproval online. So what does this mean for organizations? Can NGOs, corporations, political parties and other groups harness the power of this online activity?

Nearly 64% of Americans say they are more inclined to support social and environmental issues in a variety of ways - including volunteering, donating and sharing information - after first “liking” or “following” an organization online. Social media allows nonprofits to engage directly with their audience in a way never seen before. This new accessibility can in turn make organizations appear more “human,” but at the same time also more vulnerable to attacks on their actions, opinions and their brand.

Some organizations in particular struggle with the informal, fast and personal communication that happens on social media. Even high profile companies and people have been caught in scandal:

Home Depot got in trouble for a racist tweet; and just this Thanksgiving, a GOP staffer lost her job for commenting on Obama’s daughters, asking them to “show a little class”.

Others have learned to use social media to their advantage. Let’s look at a specific example. The American food chain Chipotle, wanted to share its commitment to sustainable food sourcing practices with its customers. Instead of hammering out a dry press release, Chipotle developed creative content to target the modern audience: animated videos that tell the (corporate) story in an engaging and fun way. The videos have generated over 20 Million views on YouTube.

And they have sparked a public dialogue around sustainable farming and food sourcing that went far beyond the Chipotle brand. An analysis of the Twitter conversations after the release of Chipotle’s second video showed that a 98% positive response. But the video didn’t only receive praise; many criticized Chipotle for over-simplifying a complicated food issue, unfairly attacking farmers and using vegetarian imagery to sell meat.

As with Chipotle, engaging face-to-face with customers and supporters through campaigns and social media can be a tricky affair. During Breast-Cancer Awareness Month this October, Baker Hughes, a producer of hydraulic fracturing equipment, and the non-profit organization Susan G. Komen announced a new partnership. Baker Hughes donated $100,000 to the organization to support breast-cancer awareness, research and treatment. In return, Baker Hughes was allowed to use the organizations trademarked pink color for its drill bits: 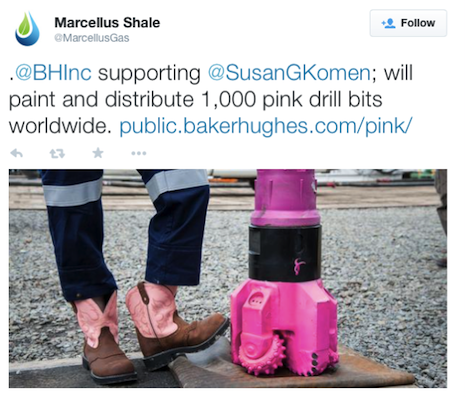 The problem? Workers and people living around fracking sites have shown elevated levels of benzene, and exposure to it is linked to breast cancer. Media, activists and breast cancer organizations immediately jumped on it and some described the partnership as “pinkwashing” and a “slap in the face to the notion of curing cancer”.

Using the wrong language, staging the wrong promotion, working with the wrong partners, can all lead to serious backlash. With so many ways to do wrong in today’s hyperconnected world, social media acts as a frightening accountability platform for many. Compared to the U.S., German organizations are often hesitant to use social media and try to play it safe. That seems only natural, one misunderstood hash tag and you become the joke of the Internet. But not engaging on social media would mean to miss out on fundraising, business development and community building opportunities.

So how can environmental and socially-conscious businesses and organizations successfully, and more genuinely, engage with users who are ready to use social media to not only inform themselves, but also provide feedback, sign petitions and take online action? And how can German organizations learn from the mistakes their U.S. counterparts have made?

How nonprofits can use social media effectively:

It’s no longer enough to blindly push out content or make a big donation. People want to engage online in real time, feel heard, be entertained, influence an issue, and share concerns and opinions with the organization and their social network. Social media metrics, such as “likes” and “follows” are important, but it is even more important to truly listen to your audience. If you want to communicate commitments or values, make sure they genuinely fit your organization’s brand or else you’ll come across as phony or inauthentic.

Reports, press releases and corporate statements are tools of the past. People want to see photos, personalized stories, and emotion. Creating and distributing the right content is critical for breaking through. Between 140-character tweets or six-second videos, this is not an easy task. Unfortunately, there is not one “correct” format of content that stands apart. Audiences want to be educated and entertained simultaneously. Nearly 48% of Americans, for example, prefer written articles or stories when seeking out social or environmental content, and more than 40% look for videos and pictures from organizations.

A recent study showed that more than 50% of those polled said it’s more important to be able to have an impact on an issue, than be familiar with the organization they are supporting. (Cone report). Organizations can’t rely on brand awareness anymore; they have to take a stance on individual issues (for more see Issue #5, The Influence of Brand Politics, in Future 500’s Top 10 Stakeholder Issues Report.). Organizations looking to engage others in support of social and environmental issues need to provide a spectrum of ways to get involved. Points of involvement need to resonate with your followers based on follower demographics, income level, and age, including the more passive “likes” and “shares”, as well as action-oriented activities like giving feedback and changing behavior. Bottom line? The more involved people feel, the more committed they’ll feel to the cause.

The non-profit organization Sierra Club may have found a way to capitalize on people’s increased interest to take online action: the organization released a new online activism platform that encourages supporters to take simple steps: sign, tweet, attend. But the platform goes even further and tries to contextualize people’s actions: “People click on petitions, but then don’t know what happens after that. Now we are starting to collect data so we can show people how their actions translate into impact in the real world,” said Chris Thomas, Sierra Club’s Chief Innovation Officer.

Like it or not, social media and Digital Activism are becoming the norm and are a serious force that can influence an organization’s brand and customer base. Used wisely, together they can be a great tool to communicate values and gather feedback from your audience, while also getting them excited about your cause/mission. We are shifting from a communications top-down approach to a global online conversation in which real-time likes, shares and algorithms hold the power and can influence the bottom line. Don’t you want to be part of the growing discussion?

Explore #tobelonging
More from tbd*
The famous tbd* Newsletter
You want to change the world and are on the lookout for jobs, events and inspiration? Register for our weekly newsletter and stay up-to-date.
TBD* uses cookies to ensure you get the best experience on our website. Read more here.GOT IT